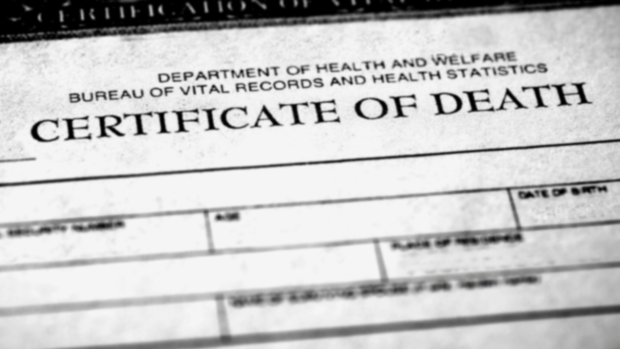 MANILA, Philippines — A bill that calls for establishing an online death verification system was filed Wednesday in the Senate.

Senate Bill No. 1436 filed by Senator Jinggoy Estrada aims the creation of such a digital scheme under the Philippine Statistics Authority (PSA).

According to Estrada, an online death verification system will enable early detection and prevention of identity theft of deceased individuals.

(In many instances, it has been proven in many Senate investigations that names of dead people have been used for fraudulent payment claims, election cheating, and other kinds of fraud. It is time to solve this issue.)

Based on Senate Bill No. 1436, the PSA will set up the Philippine Death Check (PDC) Register.

READ: PSA: Deaths and marriages up, births down in 2021

The PDC Register would be a centralized electronic database where mortality data logged with the Local Civil Registrar (LCR) will be stored.

After a death is recorded in the LCR, the relevant data is transferred to the PDC Register database.

Estrada has guaranteed that the 2012 Data Privacy Act will be upheld during the rollout of the online death verification system.

He said information will only be shared between the PSA and government bodies that “manage insurance and pension funds to suppress any fraudulent acts.”

In the explanatory note of Senate Bill No. 1436, Estrada recalled that a “certain dialysis center was filing claims before the Philippine Health Insurance Corporation (Philhealth) on behalf of their dead patients since 2016.”

He also noted that the official voters’ list released by the government’s election body still includes the names of so-called ghost voters or dead persons.