Brazil on knife-edge in Bolsonaro-Lula showdown 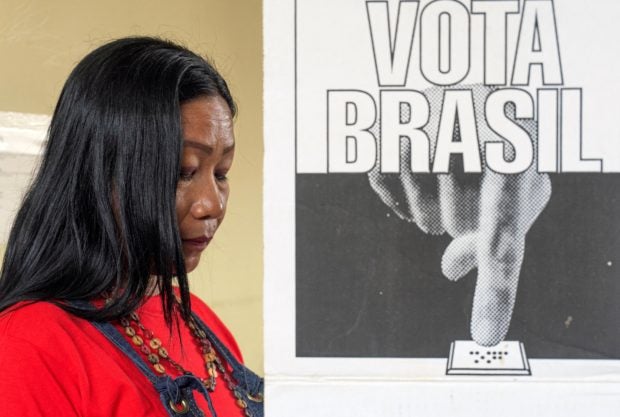 A Brazilian indigenous Tikuna woman casts her vote during the presidential run-off election at a polling station in Umariacu, Amazonas State, Brazil, on October 30, 2022. After a bitterly divisive campaign and inconclusive first-round vote, Brazil elects its next president in a cliffhanger runoff between far-right incumbent Jair Bolsonaro and veteran leftist Luiz Inacio Lula da Silva. (Photo by Carlos SUAREZ / AFP)

RIO DE JANEIRO –  Brazilians were on the edge of their seats Sunday awaiting results from an election battle between far-right incumbent Jair Bolsonaro and leftist Luiz Inacio Lula da Silva, in a bitterly divisive race seen as too close to call.

The runoff capped a dirty campaign that has left the South American nation of 215 million people deeply split between supporters of conservative ex-army captain Bolsonaro, those of charismatic ex-metalworker Lula, and many others more or less equally disgusted by both.

Lula supporters set off fireworks and cheered as he took a razor-thin lead with 73 percent of polling stations reporting: he had 50.13 percent of the vote, to 49.87 percent for Bolsonaro, according to official results.

Allegations of foul play lasted straight to the end, as Lula’s Workers’ Party (PT) accused the police of using massive roadblocks to suppress votes in his strongholds, especially the impoverished northeast.

About an hour before polls closed at 5:00 pm (2000 GMT), top electoral judge Alexandre de Moraes said the situation had been resolved and ruled against extending voting hours.

Those in line when polls closed are still allowed to vote.

Dressed in red to show support for Lula, or the yellow and green of the Brazilian flag adopted by Bolsonaro supporters, voters from Sao Paulo to the beaches and favelas of Rio de Janeiro to the Amazon rainforest cast an electronic ballot.

The nation is on tenterhooks over the outcome after months of mud-slinging and personal attacks, and allegations by Bolsonaro of fraud in the voting system.

“The anxiety level is at 1,000. I think it’s going to go down to the last second,” Lula supporter Thais Mendonca Plaza, a 42-year-old couples therapist, told AFP at a Sao Paulo bar where she and her friends were watching the results come in.

Lula, 77, narrowly won the first-round election on October 2, and entered the finale the slight favorite with 52 percent of voter support to 48 percent for Bolsonaro, according to a final poll from the Datafolha institute Saturday.

However, Bolsonaro, 67, performed better than expected last time around, and the result is anyone’s guess.

Bolsonaro came under fire for his disastrous handling of the Covid-19 pandemic, which left more than 680,000 dead in Brazil, as well as his vitriolic style and disdain for political correctness.

However, in recent months, falling unemployment figures, slowing inflation and a recovering economy have given him a boost.

His core supporters — the business sector, anti-corruption voters and the powerful “Bibles, bullets and beef” coalition — love his gloves-off style and focus on conservative values.

“I am against abortion. I’m voting for the person defending family: the ‘Legend,'” said 67-year-old Magali Zimmermann, using a nickname for Bolsonaro, at a church in Copacabana.

“Bolsonaro is not perfect, he is not Jesus. But I did a comparison, and he was never in prison,” said Afro-Brazilian housewife Vanuza Xavier, 39, referring to the graft cases that have long dogged Lula as she voted in the capital, Brasilia.

In Copacabana, education teacher Gustavo Souza, who voted for Lula, said he was “scared” about the outcome, reflecting fears that Bolsonaro would not accept the result after months of attacking the electoral system.

“People have become so radical. They will need some maturity… or it will turn into the third or fourth world war,” he said, laughing nervously.

On Friday night Bolsonaro pledged to respect the election, though possible accusations of rigging and a backlash from his supporters loom large.

“I think this is the most important election in Brazil’s democratic history,” said Miguel Martins, a 36-year-old writer voting for Lula in the capital Brasilia.

“It has been very difficult living in this country the past four years and I am very hopeful that we can turn the page.”

The election has global ramifications: conservationists believe the result could seal the fate of the Amazon rainforest, pushed to the brink by fires and deforestation that have surged under Bolsonaro.

However, for Brazilians, issues of poverty, hunger, corruption and traditional values are top of mind.

Lula was the country’s most popular president when he left office, helping lift millions out of poverty with his social programs.

But he then became mired in a massive corruption scandal and was jailed for 18 months, before his convictions were thrown out last year. The Supreme Court found the lead judge was biased, but Lula was not exonerated.

If he wins, he faces a hostile Congress dominated by Bolsonaro lawmakers and allies.

A second term for Bolsonaro would likely mean he doubles down on his hardline conservative agenda and “culture wars,” analysts say.