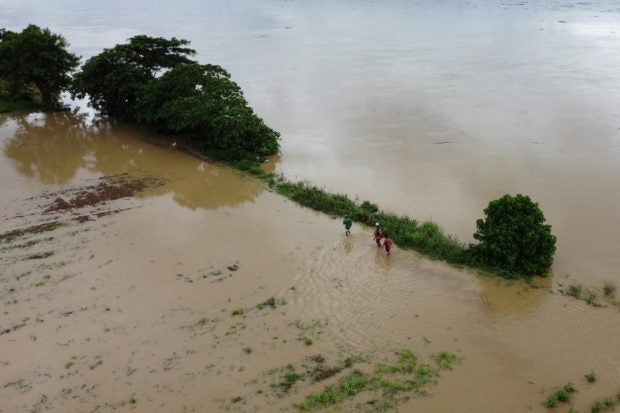 An aerial shot shows residents wading through a flooded rice field at a village in Tuguegarao, Cagayan province, north of Manila on Oct. 30, 2022, a day after Tropical Storm Paeng, international know as Nalgae, hit. (Photo by Agence France-Presse)

Damage to the agriculture sector caused by Severe Tropical Storm Paeng (international name: Nalgae), which is due to leave the Philippine area of responsibility (PAR) Monday afternoon, started to pile up after heavy rains and strong winds devastated farmlands and fishing areas in its path.

As of 9 a.m. on Sunday, the Department of Agriculture (DA) in Western Visayas (DA-6) reported that farm damage in Negros Occidental and Iloilo already amounted to P70.32 million.

At least 1.6 metric tons of crops worth P33.5 million were also damaged after floods hit 171 villages in Capiz, Antique, Aklan, and Negros Occidental.

A partial assessment by authorities on the effects of Paeng in the Bicol region placed the initial damage at P3.6 million in agriculture and infrastructure while farmers and fishermen in Oriental Mindoro lost around P30 million in crops and fishing facilities.

The amount of damage is still expected to rise since it did not yet include reports from the provinces of Albay, Camarines Norte, and Catanduanes.

In Camarines Sur, Paeng has so far cost P1.1 million in high-value crops such as lettuce and pechay (Chinese cabbage).

Meanwhile, in Sorsogon, the losses in high-value crops were estimated at P104,434.

So far, according to the DA, Paeng has affected 62 fisherfolk and farmers in the three provinces.

In Buhi town, Camarines Sur, an estimated loss of P3.9 million due to fish kill in Lake Buhi was separately reported, according to Carmelita Marquez, the municipal disaster risk reduction and management officer.

The lake is home to the world’s smallest commercial fish, the “sinarapan” (Mistichthys luzonensis).

Marquez said that as of Saturday, the fish kill has affected the area of Tambo village and involved 126 fish cages containing tilapia.

As of Sunday morning, authorities were still monitoring other possible affected areas.

The agricultural losses initially reported came from the towns of Pinamalayan (more than P20 million) and Victoria and Calapan City.

The farm losses caused by Paeng will add to the P583 million in agricultural damage caused by two weather disturbances that struck earlier this month, Tropical Depression Maymay and Typhoon Neneng.

The DA had reported that damage to the farm sector by Supertyphoon Karding in late September amounted to P3.12 billion while Severe Tropical Storm “Florita” in August caused another P1.13 billion in losses.

Aklan, Capiz town declare state of calamity due to Paeng