Over 72,000 still in evacuation centers as Paeng batters Bicolandia 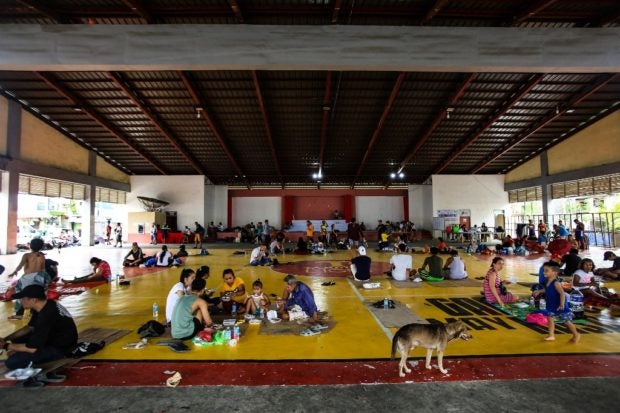 Stranded passengers take a rest inside a gymnasium in Matnog town, Sorsogon province, south of manila on October 28, 2022, after authorities halted ferry service between Matnog Luzon island and Allen in Samar island, ahead of the landfall of Tropical Storm Nalgae. Landslides and flooding killed at least 31 people as heavy rain from an approaching storm lashed the southern Philippines, with some residents stranded on rooftops, a disaster official said on October 28. (Photo by Charism SAYAT / AFP)

LEGAZPI CITY – At least 15,426 families or 72,089 individuals are still in evacuation centers and private residemces in the Bicol region due to the threat of Severe Tropical Storm Paeng (international name: Nalgae), regional authorities reported on Saturday.

Gremil Alexis Naz, spokesperson of Office of Civil Defense – Bicol, said in a report that 15,296 families or 71,676 individuals from landslide and flood-prone areas are in evacuation centers while 130 families or 413 persons are staying in shelters outside the government facilities.

The local officials started the pre-emptive and forced evacuation in high-risk areas as early as Friday morning.

As of 8 a.m., the Philippine Coast Guard – Bicol reported that 2,426 passengers, 783 rolling cargoes and 60 fishing vessels were stranded in various ports in the region.

Floods and landslides were also reported in different areas in Camarines Sur, Masbate and Sorsogon.

On Saturday morning, Albay Governor Noel Rosal lifted the suspension of work in public and private offices while malls, groceries, supermarkets and local markets were also allowed to resume operations.

He, however, said displaced residents would have to stay at the evacuation centers as the province was still threatened by heavy rains.

Classes in all levels in public and private schools are still suspended in the region.

The Department of Social Welfare and Development Bicol distributed P609,970 worth of assistance to the families affected by the weather disturbance.

The evacuees were also given P538,665 worth of family food packs while the local government units in Matnog, Sorsogon and Del Gallego, Camarines Sur also provided hot meals to the stranded passengers.

The Philippine Atmospheric, Geophysical, and Astronomical Services Administration (Pagasa) said Paeng made landfall in Virac town in Catanduanes at 1:10 a.m. and its second landfall was recorded in Caramoan town in Camarines Sur at 1:40 a.m.

A total of 3,681 families or 14,701 individuals from eleven towns in Catanduanes were also evacuated.

“Mabini village is isolated while road from Anong village in Viga town is not passable,” Nikko Franco Templonuevo, Catanduanes provincial information officer told the Inquirer in a text message Saturday.

Templonuevo said minor landsides occurred in Vera village in Viga town and only one lane is passable at a bridge in Bato town after a tree, that was uprooted when heavy rains softened the soil around it, fell.

Power was also cut off in the island province at 9:30 p.m. on Friday.

In its 8 a.m. bulletin, Pagasa said that based on the Daet and Baler Doppler Weather Radars, Paeng was spotted over the coastal waters of Catanauan town in Quezon.

It still packs maximum sustained winds of 95 kilometers per hour (kph) and gustiness up to 160 kph and moving west- northwest at 30 kph.