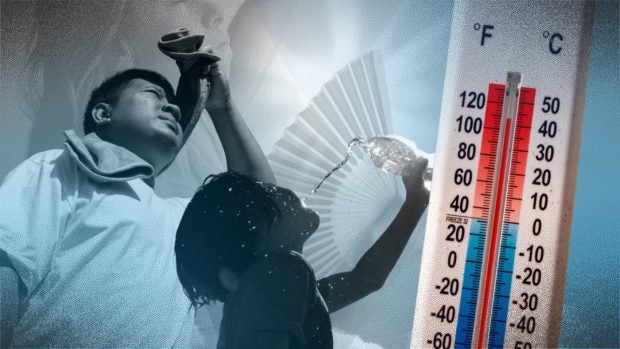 MANILA, Philippines—Globally, 599 million children are exposed to the increasing occurrence of heatwaves per year. With the rapidly accelerating climate crisis, by the year 2050, virtually all children are expected to have been exposed to frequent heatwaves.

Heatwaves, or prolonged periods of extreme high temperatures, are becoming longer, stronger, more widespread, and more frequent due to the climate crisis—and this causes a devastating impact on children worldwide, a recent report by Unicef found.

“Heatwaves are a global phenomenon. As extreme high temperatures increase and the longevity, duration, and severity of heatwaves accelerate, children are increasingly exposed to heath-related vulnerabilities,” the report stated. 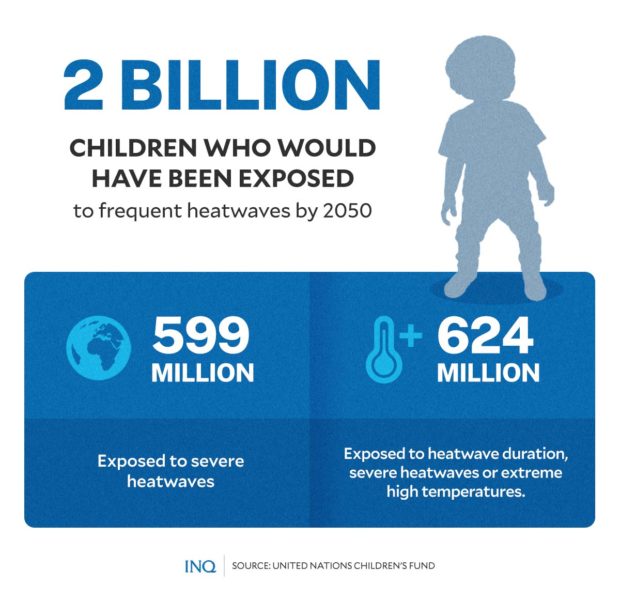 “These disasters are not inevitable or ‘natural’—they are of our making,” Unicef said.

Yet children, who are the least responsible for climate change, are bearing the biggest costs.

“The world also needs to listen. Children and young people are most affected by the climate crisis. They are not only demanding change, they are driving it—and they must be at the center of our response,” said Unicef Executive Director Catherine Russell.

“Lives are being lost from preventable causes because the world is acting too slowly on mitigation and not providing enough support for adaptation,” climate activist and Unicef Goodwill Ambassador Vanessa Nakate said.

In 2050 under the low emission scenario, the number of Filipino children who will suffer the effects of having five or more heatwaves rises to 33.5 million, or 99 percent of all children living in the country that year.

At least 26.3 million Filipino children—77 percent of the estimated total children in the country in 2050—will experience high heatwave duration. 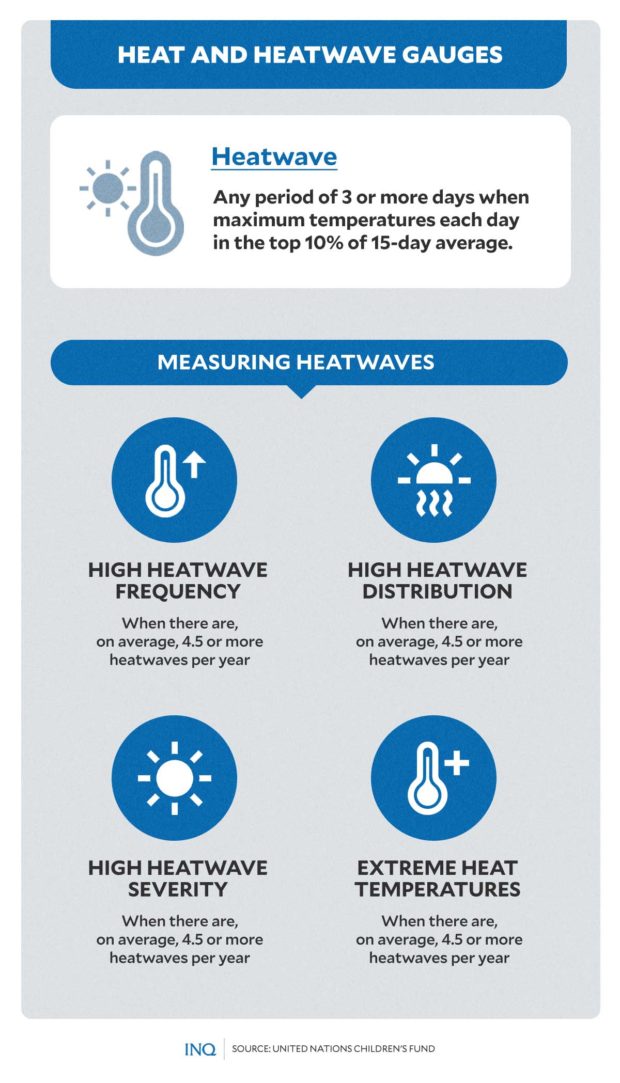 Under the very high emission scenario in 2025, 33 million children in the Philippines (99 percent) will experience high heatwave frequency, while 30.6 million (92 percent) will bear brunt of the impacts of the days-long heatwaves.

Last year, a preprint study by The Lancet investigated climate anxiety or “eco-anxiety”—characterized by a wide range of painful and complex emotions like worry, fear, anger, grief, despair, guilt, shame, and hope linked to the climate crisis—in children and young people globally.

“Climate change has important implications for the health and futures of children and young people, yet they have little power to limit its harm, making them vulnerable to climate anxiety,” the researchers stressed.

Respondents from the Philippines also believed that the government lied about the impact of actions taken to address climate change (69 percent), failed the young (68 percent), betrayed future generations (56 percent), and dismissed the youth’s call for action (53 percent). 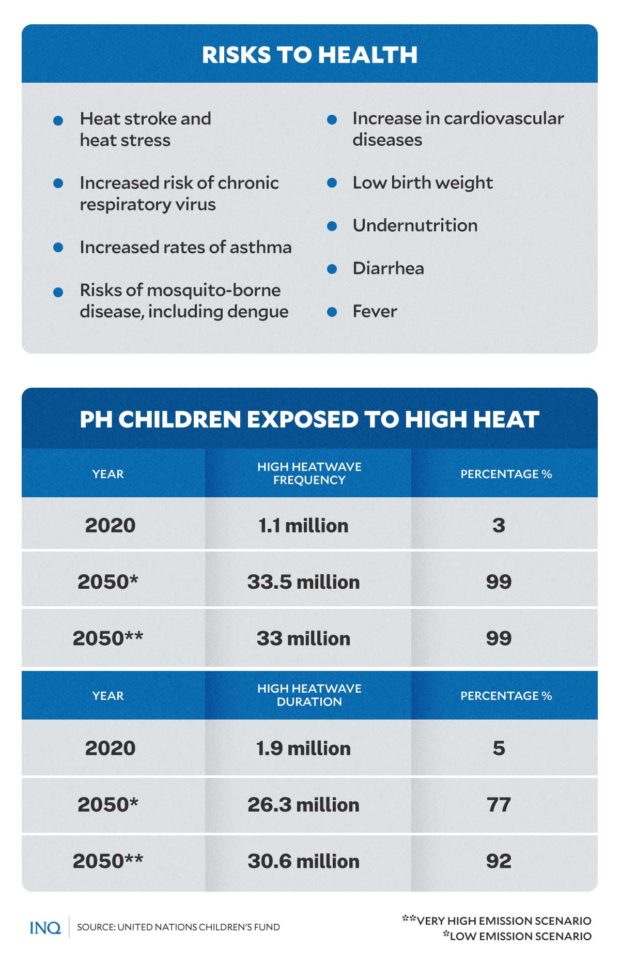 Still, 52 percent said the government is acting in line with climate change.

“The failure of governments to adequately address climate change and the impact on younger generations potentially constitutes moral injury,” it said.

“Nations must respond to protect the mental health of children and young people by engaging in ethical, collective, policy-based action against climate change,” it added.

Heatwaves, Nakate stressed, have a “devastating impact on children.”

“The more frequent, longer lasting and more severe heatwaves children are exposed to, the greater the impacts on health, safety, nutrition, education, access to water and future livelihoods,” she said.

“Extreme heat poses unique risks at different stages of childhood. Babies and young children under age 5 are the most at risk of increased heat-related mortality and morbidity,” Unicef explained.

“School-aged children are the most affected by asthma exacerbations. Adolescents are vulnerable to exertional heath-related injuries and educational/social risk,” it added

Children are affected by heat in two ways, according to the report. These are:

Among the risks of extreme and prolonged periods of high heat to children’s physical health were:

Previous studies also found that high temperatures are linked to increases in mental health problems in children and adolescents, including post-traumatic stress disorder and depression.

“Heatwaves exacerbate drought, causing crop failure and food insecurity, with severe impacts on child nutrition, particularly in communities that depend on agriculture. Higher temperatures also increase the demand for water.”

Poor health and nutrition in children due to heatwaves can also lead to lower achievement in school and lower school attendance. High air temperature, along with lower hydration amid extreme heat, also alters the children’s ability to concentrate.

“Heatwaves are a clear example. As hot as this year has been in almost every corner of the world, it will likely be the coldest year of the rest of our lives. The dial is being turned up on our planet and yet our world leaders haven’t begun to sweat. The only option is for us to continue to turn up the heat—on them—to correct the course we are on,” said Nakate.

“World leaders must do this at COP27 for children everywhere, but especially the most vulnerable children in the most affected places. Unless they take action, and soon, this report makes it clear that heatwaves will become even harsher than they are already destined to be.”