After 10 years, ‘Krus ng Sierra Madre’ embarks on another pilgrimage 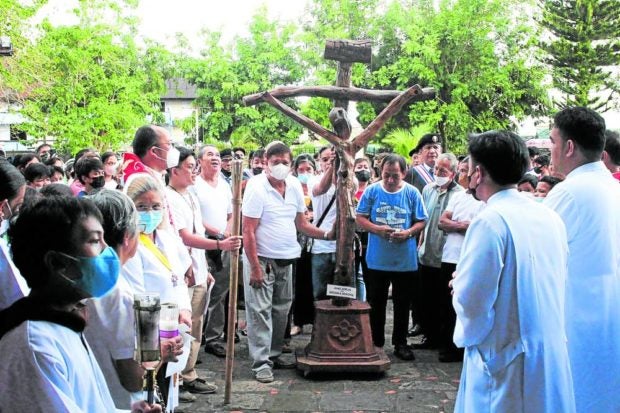 LUCENA CITY—A decade after its last pilgrimage, the revered “Krus ng Sierra Madre” (Holy Cross of Sierra Madre) has again embarked on a journey with its message of environmental protection, focusing on the preservation of the Sierra Madre mountain range, the “backbone” of Luzon.

“The second pilgrimage of the cross is timely during this critical period to remind us of our waning commitment to protect our natural resources, particularly the Sierra Madre,” Franciscan priest Fr. Pete Montallana, a known defender of the Sierra Madre and the indigenous peoples who call it home, told the Inquirer in a recent online interview.

The first journey of the cross in 2012, which took five and a half months, dramatized the government’s failure to stop the destruction of the Sierra Madre, considered one of the few remaining largest patches of lush forests in the country. The Sierra Madre covers Cagayan province in northern Luzon down to Quezon province in southern Luzon, in the country’s eastern seaboard.

The second journey of the cross was supposed to start on Sept. 26 but it was postponed due to Supertyphoon “Karding” (international name: Noru). The pilgrimage finally took off at the University of Santo Tomas in Manila on Oct. 4, in time for the feast of Saint Francis of Assisi, the patron saint of ecology.

The 2.13-meter (7-foot) cross was carved by Ifugao craftsmen from “mulawin” or molave (Vitex parviflora) driftwood gathered from the Ingrid-Angelo mountains in Pantabangan, Nueva Ecija.

The Save Sierra Madre Network Alliance Inc. headed by Montallana initiated the first pilgrimage of the cross on Good Friday in April 2012 in Tuguegarao City, Cagayan.

On Sept. 26, 2012, then President Benigno Aquino III issued Proclamation No. 413 that declared the date as “Save Sierra Madre Day” to support the campaign for “the rehabilitation, reforestation, protection and conservation” of the mountain ranges.

It was on Sept. 26, 2009, when Tropical Storm “Ondoy” (international name: Ketsana) triggered heavy rains and massive flooding in Metro Manila and surrounding provinces, causing deaths and widespread destruction. The disaster was attributed to the continued deforestation and degradation of the Sierra Madre.

“Through this second pilgrimage, we want government officials and the public to see and feel that the continuous destruction of the mountain is no different from the crucifixion of Jesus Christ,” Montallana said.

The Sierra Madre has 1.4 million hectares of forests, representing 40 percent of the Philippines’ forest cover. But the mountains continued to suffer from destructive human activities such as logging, mining, land conversion and construction of roads and dams.

The cross will again visit the 10 provinces straddled by Sierra Madre. Mass, town processions, special religious rites and a vigil would be performed at every parish stop.

On Oct. 20, the cross reached the St. Louie Bishop of Tolosa parish church in Lucban, Quezon, where the Catholic faithful held a procession around town with the cross aboard a pickup truck. The cross was taken to Minor Basilica of St. Michael the Archangel in Tayabas City, Quezon, the following day.

Sierra Madre, a natural barrier against typhoons from the Pacific Ocean, trended on social media in September after Karding, the strongest tropical cyclone to hit the Philippines so far this year, had weakened as it crossed the mountain ranges.

“Once more, if not for the Sierra Madre, the onslaught of Supertyphoon Karding could have brought grave effects to Metro Manila and other provinces,” Ramcy Astoveza, chieftain of Agta tribe in northern Quezon, said in a separate interview last week.

Astoveza, a former National Commission on Indigenous Peoples commissioner, lamented that the Sierra Madre had been abused by “irresponsible lowlanders and the government,” who should have given the mountains the respect and gratitude it deserved.

The cross will visit several churches in Metro Manila before the pilgrimage ends on April 22 next year at Malate Catholic Church in Manila, in time for the celebration of Earth Day.