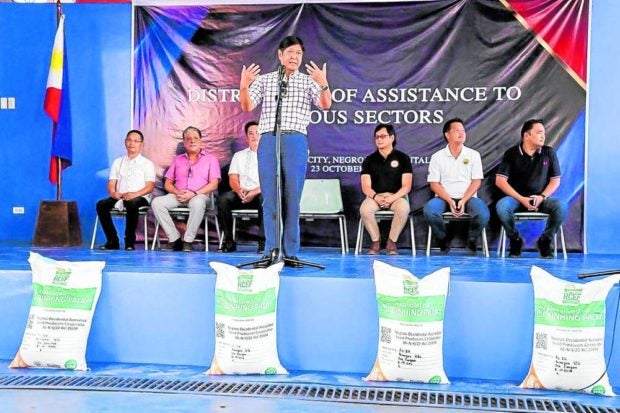 AGRICULTURE SECRETARY PAYS VISIT | President Marcos, who concurrently heads the Department of Agriculture, stops by Negros Occidental on Sunday to lead the distribution of P88 million in funds and other assistance to farmers’ groups as well as P500,000 in cash aid to indigents in the province. (Photo from Malacañang)

MANILA, Philippines — A peasant group on Sunday pressed President Ferdinand Marcos Jr. to quit his post as agriculture secretary and appoint someone suited for the job so they could cope with rising food prices.

“We need a full-time, hardworking agriculture secretary who knows how to listen to the situation and demands of farmers and agriculture stakeholders,” said Kilusang Magbubukid ng Pilipinas (KMP) president Danilo Ramos.

Marcos has resisted such calls, saying he was still “needed” at the Department of Agriculture (DA) to institutionalize structural changes. He had also rejected calls to appoint a health secretary as he would rather name one after the COVID-19 pandemic finally winds down.

The president earlier met with members of the Private Sector Advisory Council (PSAC) to seek proposals on how to address the food security situation.

However, Ramos noted that the president snubbed several proposals from the sector, including a 12-point “Doables in Agriculture” which sought to stop the policy of food import dependency and the conversion of agricultural lands.

Ramos lamented how farmers and food producers “were proposing concrete and actionable measures on how to boost local food production, how to genuinely develop the agriculture sector, and protect farmers and consumers alike from inflation shocks” but were being ignored.

They discussed, however, plans for the digitalization of agriculture, development of the supply and value chains, and improvement of the agriculture and fisheries sector.

On Sunday, Marcos was in Talisay City, Negros Occidental, where he led the distribution of government assistance to small farmers’ organizations and other sectoral groups.

He vowed more government assistance to these sectors as the economy adjusts to external factors affecting the supply of food and other agricultural products.

During the ceremony, the DA turned over mock checks to six farmer organizations amounting to P88 million under its Philippine Rural Development Project to help 1,833 farmers in the province engaged in native chicken and goat breeding and marketing, and coffee and virgin coconut oil production and marketing.

Furthermore, the DA distributed free palay seeds to 100 farmer recipients tilling 52,249 hectares throughout the province. The award certificate was received on their behalf by Gov. Eugenio Jose Lacson.

The Department of Social Welfare and Development, meanwhile, distributed P500,000 worth of assistance to 100 indigent and distressed residents, who will receive P5,000 to P10,000 each.