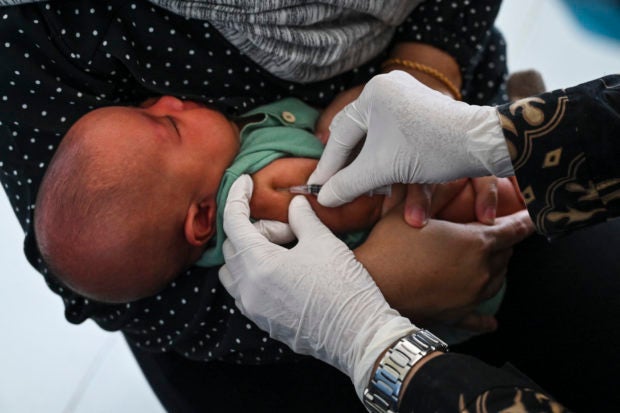 A baby receives the Bacillus Calmette-Guerin (BCG) vaccine for tuberculosis during a national immunization for children program at an integrated services post in Banda Aceh on June 9, 2022. AFP

GENEVA — Following gargantuan global efforts against Covid-19, tuberculosis is once again the world’s biggest infectious killer, a top expert has told AFP, lamenting the lack of focus on rooting out TB.

Mel Spigelman, president of the non-profit TB Alliance, hailed the swift and dramatic progress to rein in the Covid pandemic, with a vast array of safe and effective vaccines, tests and treatments developed in the space of two years.

“But the juxtaposition with TB is pretty stark,” he said in a recent interview.

Tuberculosis, once called consumption, was the world’s biggest infectious killer before the arrival of Covid-19, with 1.5 million people dying from the disease each year.

The TB Alliance, a non-profit working to develop and deliver faster-acting and affordable drugs against the disease, especially in poorer countries, points out that based on the annual death rate, TB kills 4,109 people a day.

That compares to 1,449 people a day dying due to Covid, calculated from the 40,578 deaths reported in the past 28 days on the Johns Hopkins University dashboard.

But unlike Covid, there appears to be little, and even waning, interest in taking on TB.

In fact, the pandemic had a devastating impact on efforts to battle tuberculosis, with TB hospitals taken over for Covid care, and lockdowns preventing patients from coming in for diagnosis and care.

As a result, the number of annual TB deaths swelled for the first time in a decade in 2020.

“We went from what I honestly consider to be unbelievably slow progress, but at least progress, to a reversal,” Spigelman said.

“It has been a major setback,” he said.

While billions of dollars were being thrown at the Covid fight, global economic woes and swelling geopolitical tensions prompted top donors towards the TB battle to tighten their purse-strings.

Most of the TB Alliance donors suddenly could not commit more than a year of funding at a time and slashed the amounts given, with traditional top donor Britain providing no funding at all this year.

“I am very worried that the progress that has been made, which has already been eroded by Covid… could be even further eroded,” Spigelman said.

Ironically, these difficulties are coming amid a revolution in the treatment of drug-resistant TB.

Around five percent of the 9.5 million people who contract TB each year are resistant to commonly-prescribed antibiotics, making them difficult to treat.

Until recently, “the situation with drug resistant TB was horrible,” Spigelman said.

Patients were forced to take five to eight pills a day, and often a daily injection, for up to two years, with horrible side effects and a cure-rate of just 20 to 30 percent.

But a new drug regimen BPaL, first approved by the US Food and Drug Administration in 2019, consists of just three pills a day for six months, and has far fewer side-effects and a cure-rate of 90 percent, Spigelman said.

“I think it’ll really be an amazing game-changer.”

He acknowledged though that “we are closer to the beginning of this journey than we are to the end of it,” pointing out that resources are needed to roll out the new regimen to the patients who need it.

And with TB, resources are always in short supply.

Spigelman blamed the lacking urgency around rooting out TB on it being “a disease of the poor”.

“If rich people around the world were getting it, I think we would see a very different response,” he said.

As things stand, candidate vaccines against TB have been languishing, with no funding available to develop them, and there have been no attempts to roll out easy testing like the kind developed for Covid.

Spigelman said that with the kind of resources poured into Covid, TB could be wiped out altogether.

“If the resources were there, I bet you it could be eradicated.”

Ending TB more important than ever