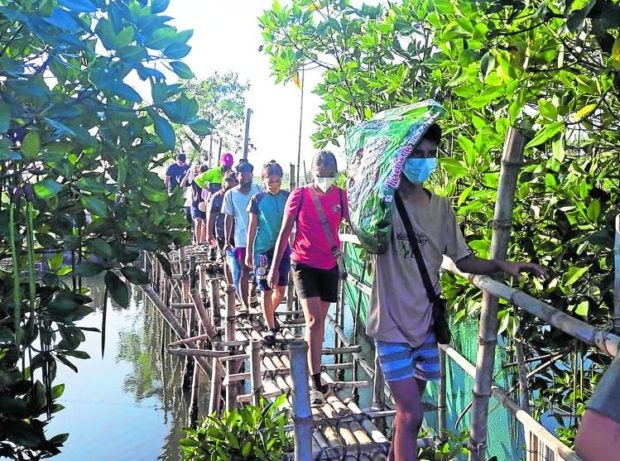 The students of Bonuan Buquig National High School who were behind the Pangasinan mangrove project. (INQUIRER FILE PHOTO)

DAGUPAN CITY, Pangasinan, Philippines — Faculty, students, and personnel of a public school here erupted in cheers on Wednesday upon the announcement that it was among the winners of the inaugural “World’s Best School Prizes,” awarded by a leading international education advocacy group.

Bonuan Buquig National High School and four other schools abroad were selected for those awards, which were launched earlier this year by T4, a global education organization based in the United Kingdom.

The five schools shared $250,000 in prize money for supporting youths and communities, particularly amid the COVID-19 pandemic. Bonuan Buquig, which has 2,000 students, bested two private international schools in an online vote and won $50,000 (P2.9 million), as part of the total cash prize.

The public school was cited in the environmental action category of the awards, for helping reverse the impact of climate change by planting mangroves in its fishing community and for cleaning the shoreline in Bonuan Buquig village, after which the school is named.

The awards ceremony was live-streamed from the United Kingdom at the Dagupan City Astrodome, where teachers, students and staff members of Bonuan Buquig were gathered late Wednesday afternoon.

“The students were ecstatic because this was the first time that the school [was] recognized internationally,” Renato Santillan, the school’s principal, said in a phone interview.

“Also, they are happy that they are able to show to the community how … mangrove planting helps the environment,” he added.

Santillan said the school will use the cash prize to establish a mangrove nursery—the term for areas reserved for tending mangrove seedlings and propagules, which are plant offshoots that grow into separate plants.

In order for young mangroves to sprout better propagules, they had to be grown from seedlings as long as a meter, Santillan said.

“If seedlings were bigger,…there could be a higher rate of survival,” explained the principal.Impact of ‘Pepeng’

Santillan said the school aims to introduce mangrove planting in other rivers in Dagupan by providing more schools with seedlings.

So far the students have only been planting along the banks of the Longos River, which crosses the village.

The mangroves project started in 2009, soon after the onslaught of Supertyphoon “Pepeng” (international name: Parma) in Northern and Central Luzon.

In Bonuan Buquig’s video entry to the awards, teacher Lin Ventenilla, who supervises the project, recalled the floods triggered by the typhoon which damaged many homes—mostly shanties and nipa huts where the students lived.

The storm also destroyed the livelihoods of the students’ families, who were dependent on fishing and managing fishponds.

“We felt we had to do something for our kids. To save our waterways, we launched a mangrove planting program [and] integrated it into our learning areas to show … how important the activity is,” Ventenilla said.

“We wanted a project that was connected to the students’ way of life,” she added. 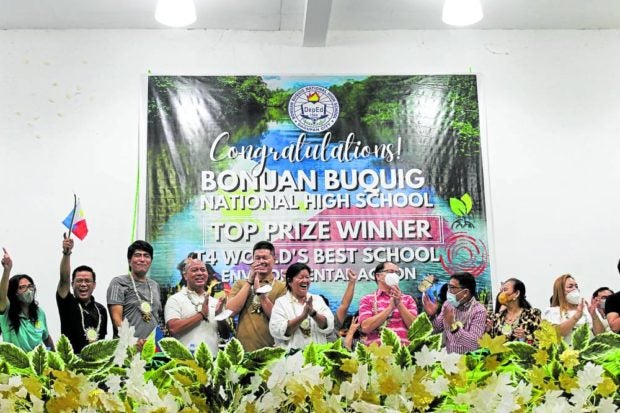 Santillan said the school also had the support of the Department of Environment and Natural Resources, Department of Education and Bureau of Fisheries and Aquatic Resources as well as provincial and city officials.

There were a thousand competing schools in the category wherein Bonuan Buquig won. Its fellow finalists were Bali Green School in Indonesia and International School of Zug and Luzern in Switzerland.

Escuela Emilia Lascar in Chile won in the innovation category for its television program which tackled a range of issues from mental health to gender identity.

Project Shelter Wakadogo, a nursery and primary school in Uganda, won in the overcoming adversity category after locals secured land, leveled roads and planted vegetables for school meals in an area that suffered from civil war.

Curie Metropolitan High School in Chicago, Illinois, won the supporting healthy lives prize for providing integrated health services and an arts program for students, many of them from minorities.

Vikas Pota, founder and CEO of T4, acknowledged the “education crisis” worldwide compounded by the pandemic.

“Far too many children will continue to be left behind in the wake of COVID unless governments take urgent action,” he said in a statement.

“As a first step, they must turn to the knowledge and experience contained within our schools because those on the front lines of education know better than anyone else the change we need to see,” he added.