‘Iloilo 42’ to go after police captors 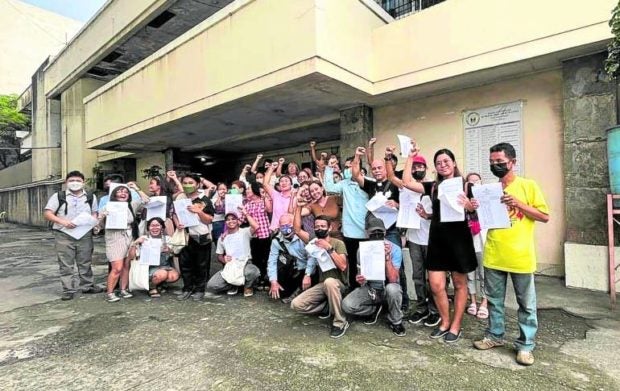 CASE DISMISSED Activists collectively known as “Iloilo 42” gather for a photo opportunity after they were acquitted on Oct. 19 by the Municipal Trial Court in Cities Branch 7 in Iloilo City of the charges filed against them by the local police for holding a protest in May 2020. —PHOTO COURTESY OF MARCO SULAYAO

ILOILO CITY—Now that the charges against them has been junked by a local court, the activists collectively called the “Iloilo 42” said they intended to run after those who arrested and haled them into court for gathering in public in 2020 at the onset of the COVID-19 pandemic.

“We will meet with our lawyers so we can discuss our next move. But definitely, we will file charges against the policemen who arrested us,” Fr. Marco Sulayao of Iglesia Filipino Independiente said on Friday.

He said they all felt vindicated and were very happy with the outcome of the charges filed against them by the police.

“The pandemic was used by the government to suppress our right to express our sentiments. Now, the ‘Iloilo 42’ has proven that what we did at the height of the pandemic was not wrong,” Sulayao said.

The 42 activists were arrested by policemen in this city’s Jaro District on May 1, 2020, while protesting the murder of Bayan Muna Iloilo coordinator Jory Porquia, who was gunned down inside his rented home here on April 30, 2020. They were charged in court for disobedience to agents of a person in authority.

On Oct. 19, Judge Radney Reginaldo Garcia of the Municipal Trial Court in Cities Branch 7 in Iloilo City acquitted Sulayao, a human rights lawyer, eight journalists and 32 others of the charges.

The judge said that while public gatherings were prohibited at that time due to the COVID-19 pandemic, Republic Act No. 11332, or the Mandatory Reporting of Notifiable Diseases and Health Events of Public Health Concern Act, and RA 11469, or the Bayanihan to Heal as One Act, which the police filed against the accused, did not provide specific violations.

“No act can be pronounced criminal unless it is clearly made so by a statute prior to its commission,” Garcia ruled.

The court also noted that when the accused were arrested, they were informed by policemen that they violated laws against public gathering and not for disobedience to authorities.

“[The accused] could not be convicted of simple disobedience because they did not perform such an act of disobedience to the police officers not only during the time of their arrest but even immediately before the said arrest,” the judge said.

Porquia’s daughter Krisma said the police should have focused on going after those who killed her father.

“At the back of my mind, the police shouldn’t have arrested and detained the accused. They should have given the time and effort to chase the perpetrators who killed my father, not cordoning us off,” she said.

Krisma said the court’s verdict was a gift to her father as it was announced on his birthday, Oct. 19: “The reason why the ‘Iloilo 42’ existed was because we called for justice after he died. On the date of his birth, the promulgation was read out and we were acquitted, so it was very significant. It was a celebration [for him]. It gives us hope,” she said.

Lawyer Angelo Karlo Guillen of the National Union of Peoples’ Lawyers (NUPL), who was both a defendant and counsel in the case, said the court’s ruling was “bittersweet.”

“[The acquittal] is an indicator that the human rights defenders’ movement is strong in resisting tyranny and oppressive government policies. Many lawyers and paralegals allied with the [NUPL] have been attacked, and at the same time, human rights defenders from other organizations,” Guillen said.