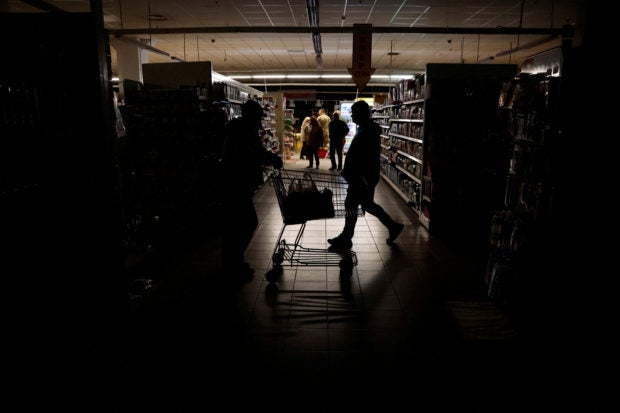 People shop in a supermarket as Kharkiv suffers an electricity outage, amid Russia’s attack on Ukraine, in Kharkiv, Ukraine, October 17, 2022. REUTERS FILE PHOTO

Ukraine’s military tightened the noose around Russian forces occupying the southern city of Kherson on Thursday as the government ordered nationwide curbs on electricity use because of Russian missile and drone attacks on power plants.

In Kherson, the only regional capital Russian forces have captured since their invasion eight months ago, the Russian-appointed administration began an evacuation of a city that controls the only land route to the Crimea peninsula, which Russia seized in 2014, and the mouth of the Dnipro river.

On Wednesday, Kirill Stremousov, deputy head of the Russia-backed administration in Kherson, wrote on Telegram that Ukraine had launched an offensive towards Novaya Kamianka and Berislav in the Kherson region.

While Ukraine remained tight-lipped about its operations, its military said in an early Thursday update on the Kherson region said 43 Russian servicemen had been killed and six tanks and other equipment destroyed.

Footage of people fleeing by boat across the Dnipro river were broadcast by Russian state television, which portrayed the exodus as an attempt to evacuate civilians before it became a combat zone.

About 50,000 to 60,000 people would be moved out in the next six days, said Vladimir Saldo, the Russian-installed chief of Kherson, while maintaining that Russia had the resources to hold the city and even counter-attack if necessary.

While gaining ground on front lines, Ukraine counted the cost of Russia’s long range strikes deep into its territory.

On Thursday, the government placed restrictions on electricity usage nationwide for the first time since Russia’s invasion following a barrage of attacks on power plants just before the winter sets in.

Power supply will be restricted between 7 a.m. and 11 p.m., government officials and the grid operator Ukrenergo said, and temporary blackouts were possible if people did not minimize their use of electricity, a presidential aide said.

“We do not exclude that with the onset of cold weather we will be asking for your help even more frequently”, Ukrenergo said, referring to the restriction that is limited to Thursday.

Russia has intensified its missile and drone attacks on Ukraine’s power and water infrastructure in recent days.

“There is new damage to critical infrastructure. Three energy facilities were destroyed by the enemy today,” President Volodymyr Zelensky said in his Wednesday night video address.

“We assume that Russian terror will be directed at energy facilities until, with the help of partners, we are able to shoot down 100% of enemy missiles and drones,” said Zelensky, who earlier in the week said a third power stations had been hit by Russian air strikes.

Zelenskiy was due to address an EU summit on Thursday. Leaders of the 27 member states will discuss options for more support to Ukraine, including energy equipment, helping restore power supply and long-term financing to rebuild.

Reuters witnesses said five drones hit the southern city of Mykolaiv on Thursday, but it was unclear where they had exploded or how much damage had been done.

Ukraine accuses Russia of using Iran-made Shahed-136 “kamikaze drones”, which fly to their target and detonate. Iran denies supplying them and the Kremlin has denied using them.

The United States, Britain and France raised the issue of Iran’s suspected transfer of drones to Russia at a meeting of the U.N. Security Council, U.S. State Department spokesperson Ned Price said.

Russia’s deputy U.N. Ambassador, Dmitry Polyanskiy, told reporters Russia would reassess its cooperation with U.N. Secretary-General Antonio Guterres and his staff if Guterres sends experts to Ukraine to inspect downed drones that Ukraine and the West assert were made in Iran.

Polyanskiy said he was not optimistic about reaching agreement with Guterres and other U.N. officials in negotiations to extend and expand a July 22 deal that led to the resumption of Ukraine Black Sea grain and fertilizer exports. The pact could expire next month.

Meanwhile, the United States imposed new sanctions on Russia, targeting a network that it accused of procuring military and dual-use technologies from U.S. manufacturers for Russian users.

On the eastern front

In eastern Ukraine bordering Russia, Moscow’s forces focused their main attempt to advance on the towns of Bakhmut and Avdiivka, the Ukrainian military said.

Bakhmut is the focus of Russia’s slow advance through the Donetsk region. Forces trained tank and artillery fire on at least 10 towns in the area, including Bakhmut, Soledar and Bilohorivka, the Ukrainian military said.

Russian President Vladimir Putin demanded an all-Russia war effort and declared martial law on Wednesday in areas of Ukraine occupied by his forces.

Zelensky warned Ukrainians in occupied areas against any Russian attempts to draft them into the army, saying they should try to leave.

“If you cannot do this and find yourself in Russian military structures, at the first opportunity try to lay down your weapons and come to Ukrainian positions,” he said.