Villar irked by rubber research exec for confusion over data 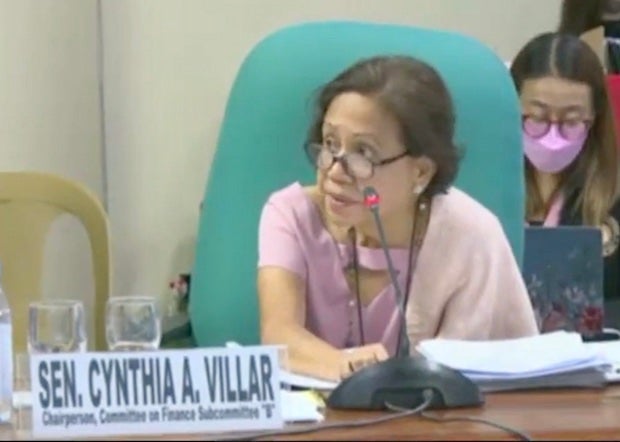 Sen. Cynthia Villar presides over the hearing of Subcommittee B of the Committee on Finance on Wednesday, Oct. 19, 2022. (Photo from a video posted on Facebook by the Senate)

MANILA, Philippines — Sen. Cynthia Villar was irked on Wednesday by the officer in charge of the Philippine Rubber Research Institute (PRRI) for ignorance of rubber production data in the Philippines.

It happened during the 10-hour hearing of  Subcommittee B of the Senate Committee on Finance. Villar had asked the PRRI chief, Executive Director Girlie Saludo, to identify the regions that had a big rubber production.

Saludo said she did not have the information that Villar was asking for.

“You’re head of the Philippine Rubber [Research Institute]. You don’t know the data? You should know where you are producing the rubber. My God, you are not doing your job. You don’t even know the figures. I’m just asking where it is produced more,” Villar said.

Saludo said that the document she had did not indicate the percentage but only the volume produced per region.

Villar then asked for the volume of rubber production in Region 9 – the Zamboanga Peninsula.

Saludo took a while to respond.

“You don’t have it memorized? How do you manage? The sales of my store I memorize every day,” Villar said, speaking in Filipino.

Villar then tackled the production volume in Region 12 – the Soccsksargen, or Central Mindanao, Region. She noticed that the figures didn’t add up to the total 274,660 metric tons that Saludo had mentioned earlier.

“It’s basic that you should know that — the production [of rubber] in the Philippines and which regions have a big production of rubber. You should have that memorized by heart. You should not get confused while you’re looking for the figures in your list,” Villar said.

At the end of the hearing, the Senate panel approved the proposed P40.993 million budget of the PRRI for 2023. PRRI is an agency under the Department of Agriculture.

—WITH A REPORT FROM KRISTELLE RAZON (TRAINEE)