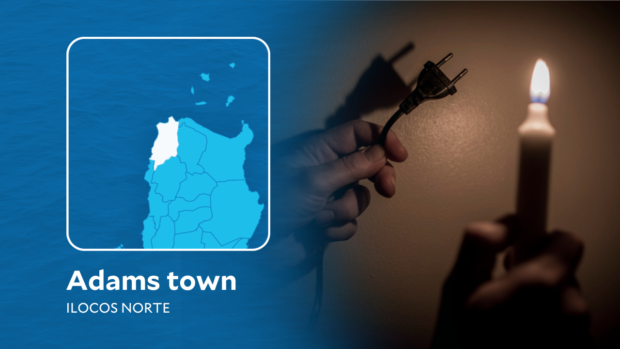 Except for Adams, Inec said that 98.39 percent of the province’s 559 villages had been restored after Neneng’s heavy rain and strong winds felled electric poles on Sunday, Oct. 16.

On Wednesday, two helicopters of the Philippine Air Force delivered aid to typhoon-hit victims of the town, according to the provincial government.

The town, which is perched atop mountains, recorded a “significant damage” from Neneng and was “isolated” from the rest of the province after the typhoon, according to Ilocos Norte Gov. Matthew Marcos Manotoc in a press briefing on Monday, Oct. 17.

Neneng caused a bridge in Adams to collapse, while a series of landslides blocked Pancian-Adams Road which left the province “isolated” from the rest of the province, according to Manotoc.

Manotoc said that he had been in constant coordination with the local government in Adams “to address the immediate needs of the community” following the typhoon.

He noted that town residents also needed to walk at least 10 kilometers to Pancian village in nearby Pagudpud town to access mobile signal.

“We have sent a payloader to help in the road clearing operations in Adams,” said Manotoc, as he noted the importance of having resources during disasters such as “air assets within our reach and a backup during search and rescue operations.”

After Neneng, the shear line continue to bring moderate to heavy rain in Ilocos Norte.

The province will also experience inclement weather due to Tropical Depression Obet, which is expected to cross extreme Northern Luzon or the northern part of mainland Northern Luzon by Friday evening, Oct. 21, according to the Philippine Atmospheric, Geophysical, and Astronomical Services Administration (Pagasa).