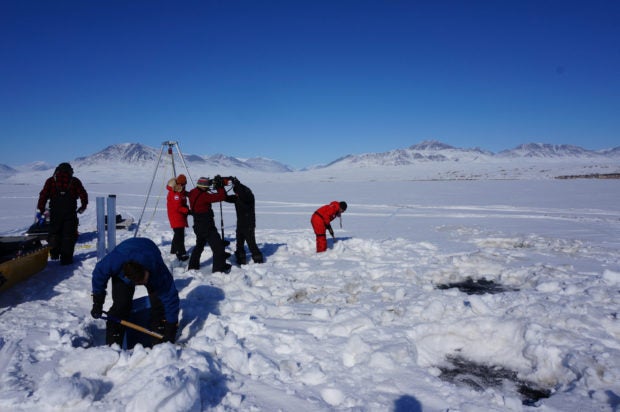 This handout picture taken on May 29, 2017 and made available by Graham Colby on October 17, 2022 shows researchers drilling holes to collect sediment at the Lake Hazen in Nunavut, to investigate how climate change might increase the risk of “viral spillover. AFP FILE PHOTO

TOKYO — A warming climate could bring viruses in the Arctic into contact with new environments and hosts, increasing the risk of “viral spillover”, according to research published Wednesday.

Viruses need hosts like humans, animals, plants or fungi to replicate and spread, and occasionally they can jump to a new one that lacks immunity, as seen during the Covid-19 pandemic.

Scientists in Canada wanted to investigate how climate change might affect spillover risk by examining samples from the Arctic landscape of Lake Hazen.

It is the largest lake in the world entirely north of the Arctic Circle, and “was truly unlike any other place I’ve been”, researcher Graham Colby, now a medical student at University of Toronto, told AFP.

The team sampled soil that becomes a riverbed for melted glacier water in the summer, as well as the lakebed itself — which required clearing snow and drilling through two meters of ice, even in May when the research was carried out.

They used ropes and a snowmobile to lift the lake sediment through almost 300 meters (980 feet) of water, and samples were then sequenced for DNA and RNA, the genetic blueprints and messengers of life.

“This enabled us to know what viruses are in a given environment, and what potential hosts are also present,” said Stephane Aris-Brosou, an associate professor in the University of Ottawa’s biology department, who led the work.

But to find out how likely they were to jump hosts, the team needed to examine the equivalent of each virus and host’s family tree.

“Basically what we tried to do is measure how similar these trees are,” said Audree Lemieux, first author of the research.

Similar genealogies suggest a virus has evolved along with its host, but differences suggest spillover.

And if a virus has jumped hosts once, it is more likely to do so again.

The analysis found pronounced differences between viruses and hosts in the lakebed, “which is directly correlated to the risk of spillover,” said Aris-Brosou.

The difference was less stark in the riverbeds, which the researchers theorize is because water erodes the topsoil, removing organisms and limiting interactions between viruses and potential new hosts.

Those instead wash into the lake, which has seen “dramatic change” in recent years, the study says, as increased water from melting glaciers deposits more sediment.

“That’s going to bring together hosts and viruses that would not normally encounter each other,” Lemieux said.

The authors of the research, published in the Proceedings of the Royal Society B: Biological Sciences journal, caution they are neither forecasting an actual spillover nor a pandemic.

They also warn more work is needed to clarify how big the difference between viruses and hosts needs to be to create serious spillover risk.

But they argue that warming weather could increase risks further if new potential hosts move into previously inhospitable regions.

“It could be anything from ticks to mosquitoes to certain animals, to bacteria and viruses themselves,” said Lemieux.

“It’s really unpredictable… and the effect of spillover itself is very unpredictable, it can range from benign to an actual pandemic.”

The team wants more research and surveillance work in the region to understand the risks.

“Obviously we’ve seen in the past two years what the effects of spillover can be,” said Lemieux.

At the gateway to the Arctic, a world in turmoil