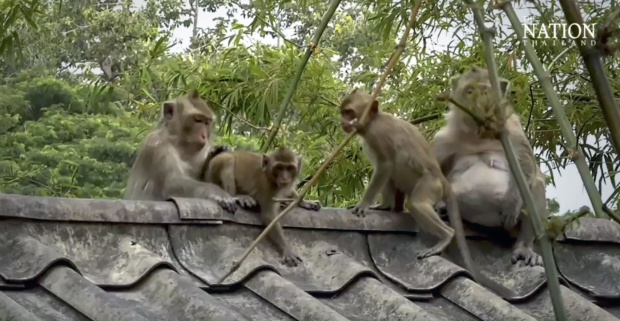 BANGKOK — Monkeys facing starvation after months of flooding in one Ayutthaya district are now invading homes in their desperate search for food.
Sena is among Ayutthaya districts that have been inundated by runoff from the upstream Chao Phraya and Pasak Jolasid dams amid heavy rain in northern Thailand since August.

Both dams have now lowered their discharge rate but most of the province remains flooded, including Sena district where the “monkey temple” of Wat Pho is situated.

Locals say the troop of over 100 monkeys are now eating leaves from trees as no tourists have visited the flood-hit temple for months. Usually, tourists and villagers leave eggs and fruit at a small pavilion that the temple has built as a “canteen” for the creatures.

The monkeys are now swimming across the floods to invade monks’ quarters and villagers’ homes in search of food from garbage bins and kitchens.

“The monkey invasion has added another burden for monks and villagers, who are already suffering after months of flooding,” said one villager.

On Sunday, the province reported that 14 of Ayutthaya’s 16 districts are currently flooded, affecting over 66,000 households in 963 communities. Over 13,000 rai of farmland has been damaged by floodwater.

Meanwhile, 70 temples and historical sites in the Unesco world heritage city are at risk of collapse from flooding, according to the director of Ayutthaya Historical Park.

Pattarapong Kao-ngern said on Saturday that the at-risk structures are located outside the old city walls in low-lying areas.