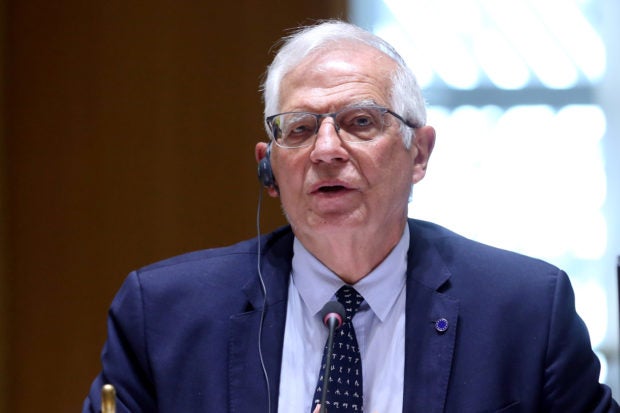 European High Representative of the Union for Foreign Affairs Josep Borrell speaks during a meeting via video conference with EU foreign ministers at the European Council in Brussels, Belgium April 19, 2021. Francois Walschaerts/Pool via REUTERS/File Photo

Several European Union foreign ministers on Monday called for sanctions against Iran over the transfer of Iranian drones to Russia, as the bloc agreed a separate set of asset freezes and travel bans over Tehran’s crackdown on protests.

The sanctions and threat of more will pile pressure on Iran’s rulers who have struggled to contain demonstrations sparked by the death in police custody of Mahsa Amini, a 22-year-old woman who was detained for “inappropriate attire”.

Ukraine has reported a spate of Russian attacks with Iranian-made Shahed-136 drones in recent weeks, saying on Monday that Tehran was responsible for the “murders of Ukrainians”.

Iran says it has not sent any drones to Russia since Moscow’s invasion of Ukraine. The Kremlin has not commented.

“Iranian drones are used apparently to attack in the middle of Kyiv, this is an atrocity,” Denmark’s Foreign Minister Jeppe Kofod said as he arrived at a meeting of EU foreign ministers in Luxembourg.

Reinsalu said Kyiv’s reports on the Iranian origin of the drones should be taken seriously, with sanctions acting as a deterrent to show “this has consequences.”

France and Germany, both parties to the 2015 nuclear deal with Iran, have also said they believe new sanctions over the drones are necessary and that the drone transfers should be seen as a violation of a U.N. Security Council resolution.

The EU could move towards imposing new sanctions against Iran over the matter, according to two diplomats involved in preparing talks among the ministers, though no detailed decisions were taken – or expected – on Monday.

“We are following very closely the use of drones. We are gathering evidence and we will be ready to react with the tools at our disposal,” EU foreign policy chief Josep Borrell told a news conference after the ministers’ meeting.

Meanwhile, the EU foreign ministers added 11 Iranians and four institutions, including Iran’s morality police chief, to a travel ban and asset freeze list for their role in the crackdown on protests after Amini’s death.

“Unanimous decision today to take action against those in #Iran responsible for the death of #MahsaAmini and violent repression of peaceful protests,” Borrell tweeted.

Tehran says it is keeping order against foreign-instigated troublemakers.

Additional EU sanctions on Iran will not be limited to blacklisting some individuals should Tehran’s involvement in Russia’s war on Ukraine be proven, Luxembourg’s Foreign Minister Jean Asselborn said.