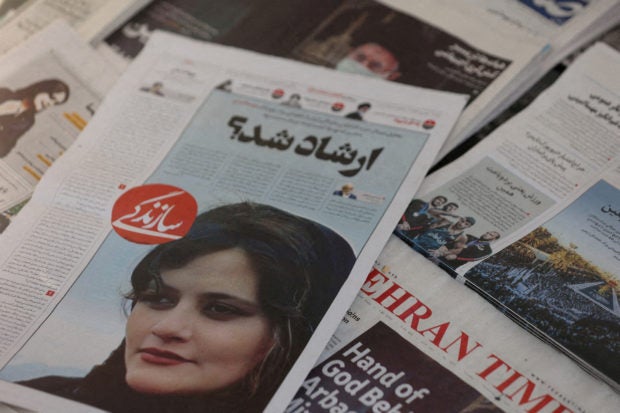 FILE PHOTO: A newspaper with a cover picture of Mahsa Amini, a woman who died after being arrested by Iranian morality police is seen in Tehran, Iran, September 18, 2022. Majid Asgaripour/WANA (West Asia News Agency) via REUTERS//File Photo

DUBAI — Eight prisoners died as a result of a fire at Tehran’s Evin prison over the weekend, Iran’s judiciary said on Monday, doubling the death toll from the blaze which has increased pressure on a government struggling to contain mass protests.

The death of 22-year-old Mahsa Amini on September 16 while in police custody has sparked protests across the country which the authorities have been trying to put down by force.

Iran’s judiciary said all the victims of the prison blaze had been held in a section of the prison designated for prisoners of robbery-related crimes. Evin also holds political prisoners and many detainees facing security charges, including Iranians with dual nationality.

Authorities said that a prison workshop had been set on fire “after a fight among a number of prisoners convicted of financial crimes and theft.” State media reported on Sunday that the first four deaths had been caused by smoke inhalation and that more than 60 had been injured, four of them critically.

In a commentary, state newspaper Iran said that counter-revolutionary forces with the help of foreign intelligence services planned the fire in order to keep international attention on the country’s unrest.

“A review of its different dimensions of this event indicates due to the presence of these dual-national “spies” or “spies” who are citizens of western countries, this would attract sensitivity of those countries, igniting the protesters,” said the newspaper.

Iran’s foreign ministry spokesman Nasser Kanaani said the fire at Evin could happen in any country.

US President Joe Biden and the European Union are among those to have criticized Tehran’s crackdown on protesters, with the EU considering to impose asset freezes and travel bans on a number of Iranian officials involved.

The judiciary spokesperson Masoud Setayeshi warned that “Spreading lies with the intention of disturbing public opinion is punishable by law.”

Families of some political detainees took to social media to call on the authorities to ensure their safety at Evin, which in 2018 was blacklisted by the US government for “serious human rights abuses.”

The protests sparked by Amini’s death a month ago have turned into one of the boldest challenges to Iran’s clerical rulers since the 1979 revolution, with protesters calling for the downfall of the Islamic Republic, even if the unrest does not seem close to toppling the system. 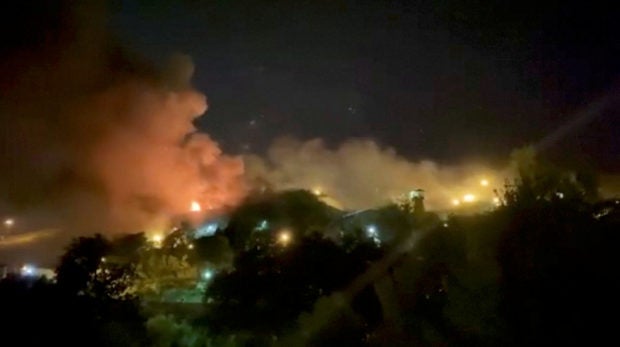 FILE PHOTO: A view of smoke rising from Evin Prison in Tehran, Iran, October 15, 2022 in this still image take from a video obtained by Reuters/File Photo

Protests resumed early on Monday in Yazd and several other cities. The widely followed activist Tasvir1500 Twitter account carried a video showing people setting fire in the streets and calling for the death of Iran’s Supreme Leader Ayatollah Ali Khamenei.

Reuters could not independently verify the videos.

Iran has deployed the Basij militia, voluntary military troops which have been at the forefront of repressing popular unrest, but they have failed to contain the protests.

The elite Revolutionary Guards, who have not taken part in the crackdown, began military exercises on Monday.

Rights groups said at least 240 protesters had been killed, including 32 minors. Over 8,000 people had been arrested in 111 cities and towns, Iranian activist news agency HRANA said on Saturday. The authorities have not published a death toll.

Iran, which has blamed the violence on enemies at home and abroad, denies security forces have killed protesters. State media said on Saturday at least 26 members of the security forces had been killed by “rioters.”