20 years on, ex-abductees call for rescue of other victims from North Korea | Inquirer News

20 years on, ex-abductees call for rescue of other victims from North Korea 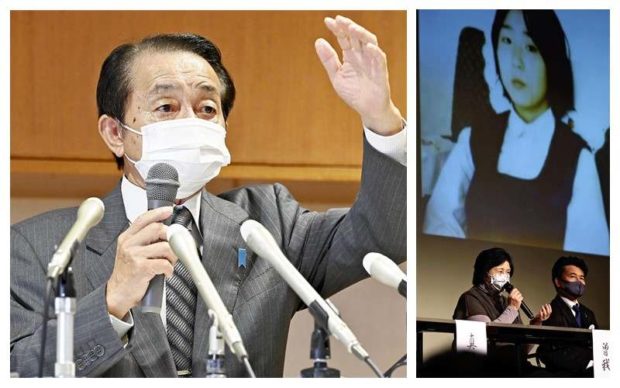 Left: Yasushi Chimura speaks at a press conference in Obama, Fukui Prefecture, on Saturday. Right: Hitomi Soga (left) speaks at a rally calling for the return of Megumi Yokota in Niigata on Saturday. The Japan News/Asia News Network

TOKYO — Yasushi Chimura and Hitomi Soga, who were kidnapped by North Korea in the late 1970s, called for the return of other such abductees Saturday on the 20th anniversary of five of Pyongyang’s victims, including the two, being repatriated to Japan.

The five abductees who returned to Japan are Chimura, his wife, Fukie, both 67, Kaoru Hasuike, 65, his wife, Yukiko, 66, and Soga, 63. They were kidnapped by North Korea during a period of July to August 1978 and spent about 24 years in the country until they were allowed to return home in 2002.

“Those 24 years in North Korea are still longer than my time back in Japan,” said Chimura at a press conference in his hometown of Obama, Fukui Prefecture. “I wonder what these 24 years were all about.”

“The abduction issue has not been resolved yet, so I can’t regard this occasion as a milestone and a 20th anniversary,” he added.

Looking back on his own repatriation, Chimura said: “I was very worried because I had to start from scratch, I went through many hardships after I got back into society at the age of 47.”

When Chimura and his wife returned to Japan, their three children remained in North Korea, and until they arrived in Japan in 2004, the family members were separated.

“It was a difficult time,” Chimura said, referring to the period of the family separation. “Even after my children arrived in Japan, I was worried about whether they could adjust themselves to Japan and work in Japanese society.”

On Saturday, Chimrua also participated in an activity of collecting petition signatures in Obama, calling for the rescue of abductees who remain in North Korea.

“Not only the families waiting for the return of their family members, but also the victims themselves are aging. If the situation remains unchanged, it will become difficult to bring them back alive,” Chimura said at the press conference. “I will do what I can do [to rescue the abductees], such as raising awareness and collecting petition signatures.”

On the same day, Soga attended a rally in Niigata, calling for the return of Megumi Yokota, who was abducted in the city in November 1977 when she was 13 years old. The rally was held by people such as Yokota’s former classmates.

“For the past 20 years, I have always had the abductees in my thoughts,” Soga said.

Soga has been waiting for the return of her mother, Miyoshi, who was 46 when she was abducted in Sado, Niigata Prefecture, along with her. At the rally, Soga shared her memories of Yokota, who had once lived with her in North Korea.

“We studied and went shopping together. She had a wonderful smile and was like a younger sister to me,” Soga said. “I want to see [Megumi] and her mother embrace each other as soon as possible.”

Yokota’s 86-year-old mother, Sakie, attended the rally virtually. “I’ve been working hard despite my old age,” she said. “We are almost there. I want to do my best together with all of you.”