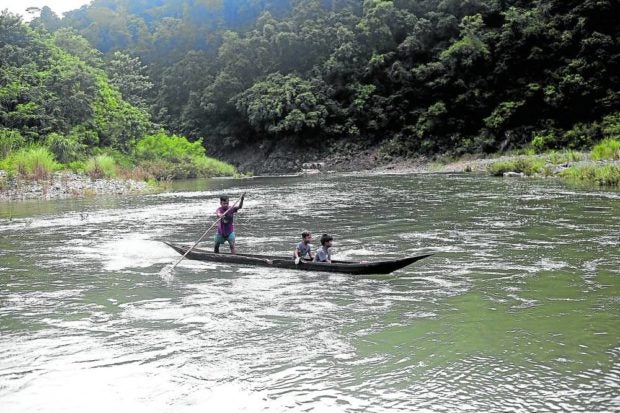 DAM BE DAMNED | Dumagat children cross the Kaliwa River at Sitio Queborosa in Infanta, Quezon province, in this Aug. 19, 2019, photo not knowing whether trees around it would be submerged if authorities allow work on a dam project, now halted, to resume. (File photo by RICHARD A. REYES / Philippine Daily Inquirer)

LUCENA CITY, Quezon, Philippines — An environmental group praised the decision of the Department of Environment and Natural Resources (DENR) to suspend the construction of the controversial Kaliwa Dam project in the Sierra Madre mountain range.

“This is a victory and one step forward in the decadeslong resistance to the destructive dam,” Jon Bonifacio, national coordinator for the Kalikasan People’s Network for the Environment (Kalikasan), said in a statement Saturday.

But he said Kalikasan would continue its calls for “the full stop to the dam’s construction, the cancellation of its onerous contract, and the junking of all future plans to build a large dam in any part of the Sierra Madre mountain range.”

The Kaliwa Dam, to be built on the ancestral land of the Dumagat-Remontado communities in Rizal and Quezon provinces, is one of the Duterte administration’s China-funded big-ticket projects under its “Build, Build, Build” program. The P12.2-billion New Centennial Water Supply Project includes the construction of a 60-meter-high concrete gravity dam on Kaliwa River that will have a reservoir surface area of 291 hectares.

Touted as the solution to an expected water shortage in Metro Manila and nearby provinces, it will have a maximum gross reservoir volume of 57 million cubic meters and a discharge capacity of 600 million liters a day.

During a Senate hearing on the proposed budget for the DENR on Oct. 11, Undersecretary Ernesto Adobo said that the environmental compliance certificate (ECC) for the project had been put on hold by the department because it had not yet complied with zoning requirements.

An ECC must be secured by proponents of a project to certify that it will not cause any significant negative environmental impact.

Environment Secretary Ma. Antonia Yulo-Loyzaga, however, clarified that an ECC had been issued but pointed out that it came with a “condition”—the free and prior informed consent (FPIC) from the indigenous peoples (IPs) to be affected by the project.

The FPIC is a requirement under the Indigenous Peoples’ Rights Act of 1997, which prevents, among others, the IPs from being relocated without their consent.

“There is no consent from the IPs in the area and therefore, it (ECC) cannot be acted on,” Loyzaga said.

Early this year, several leaders and elders of three Dumagat communities in Yokyok, Baykuran and Makidata slammed the Metropolitan Manila Waterworks and Sewerage System (MWSS) and the National Commission on Indigenous Peoples (NCIP) for signing a memorandum of agreement (MOA) on the dam project in January with only a select group of tribal leaders.

The MWSS denied that it had railroaded the consultation process, which is required before the IPs give their FPIC. 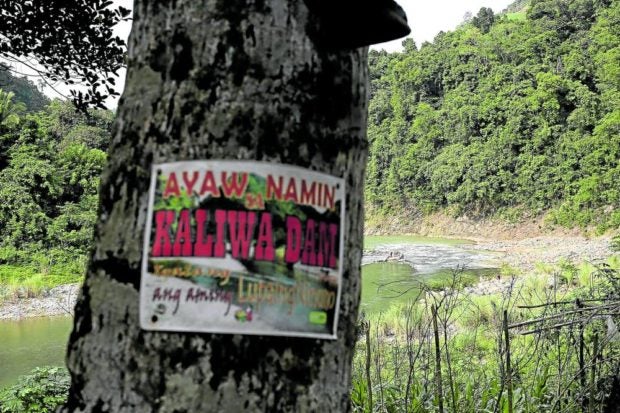 ‘WE’RE AGAINST IT’ | Members of the Dumagat- Remontado communities opposed to the dam project make their sentiments known to visitors in Barangay Magsaysay, Infanta, Quezon province, in this photo taken in August 2019. (File photo by RICHARD A. REYES / Philippine Daily Inquirer)

The MWSS has long been pushing for the construction of dams to prevent a projected water crisis in Metro Manila. The Kaliwa Dam is intended to reduce dependence on the Angat and Ipo dams.

The project, however, will submerge parts of the Sierra Madre in Tanay town, Rizal province, and General Nakar and Infanta towns in Quezon province.

The dam construction is expected to flood a watershed area of 9,700 ha and affect 1,465 families, according to studies by Save Sierra Madre Network Alliance.It will cover Sitio Cablao of Barangay Pagsangahan in General Nakar and Sitio Queborosa of Barangay Magsaysay in Infanta.

It will also include the Upper Marikina Watershed and the Kaliwa Watershed Forest Reserve, a conservation site in the Sierra Madre Biodiversity Corridor, which is a protected area under Presidential Proclamation No. 1636.

The construction of the dam was awarded to the Chinese company, China Energy, under an official development assistance agreement between Manila and Beijing.

Sen. Raffy Tulfo, who expressed his opposition to the dam project during the hearing, maintained that stopping the dam project will protect the Sierra Madre and uphold the rights of the indigenous communities.

“His opposition is very welcome in our cause to protect the rights of the indigenous people to their ancestral land as well as our advocacy to protect the Philippine environment,” Bonifacio said.

Groups opposing the project fear that it will endanger more than 100,000 lives once the dam is built as it will be constructed within a zone of two active tectonic belts—the Philippine Fault Zone and the Valley Fault System.

In 2018, at least 51 Catholic bishops led by Bishop Bernardino Cortez of Infanta signed a pastoral letter opposing the dam construction.

The letter called on the government to look for alternative water sources to address the water supply problem affecting the national capital.

Why the ECC process for Kaliwa Dam had been faulty, according to an anthropologist