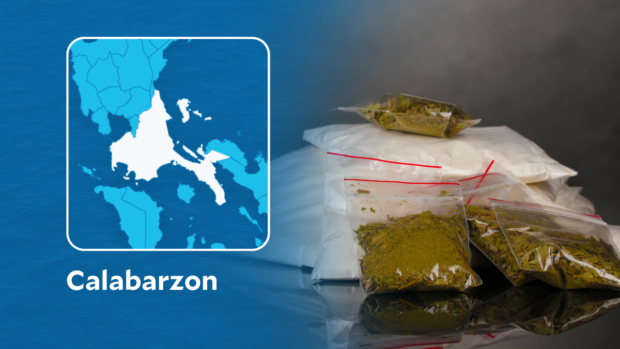 LUCENA CITY – Anti-narcotics police operatives in the Calabarzon (Cavite, Laguna, Batangas, Rizal, Quezon) arrested 31 suspects and seized P1.8 million worth of illegal drugs in 24-hour operations across the region on Thursday and Friday (Oct. 13 and 14).

In a report, the Region 4A police information office said the arrested suspects include four “high-value individuals” (HVI) and three “street-level” drug pushers.

Authorities seized 11 kilos of marijuana bricks with a DDB value of P1.3 million.

Members of the police drug enforcement unit in Cardona, Rizal likewise busted John Vincent Villarin and Neolan Belleza in Barangay Looc at around 11 p.m. on Thursday.

“I enjoin all our personnel to keep the momentum in the various programs and operations in our campaign against illegal drugs and other anti-crime efforts,” Nartatez said in a statement. INQ