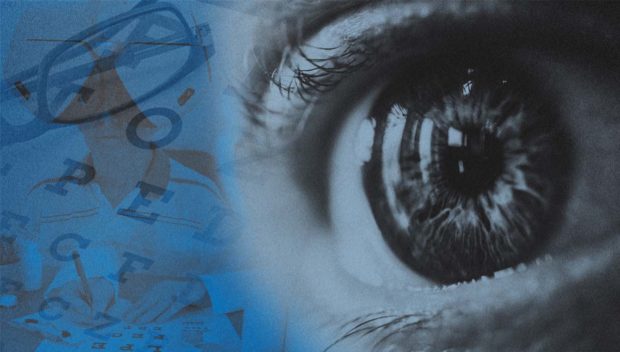 MANILA, Philippines—Did you know that smoking increases your risk of developing serious eye conditions such as cataracts and age-related macular degeneration, which could lead to permanent vision loss?

Out of those recorded vision impairment cases, at least 1 billion—or almost half— could have been prevented or has yet to be addressed. These include:

A person with 20/20 vision, according to the American Optometric Association (AOA), can clearly see at 20 feet what should normally be seen at a distance.

While the AOA said having a 20/20 vision “does not necessarily mean you have perfect vision,” it is still used to express normal visual acuity (the clarity or sharpness of vision).

Visual acuity of worse than 3/60 in the better eye is classified as blindness by the International Classification of Diseases. 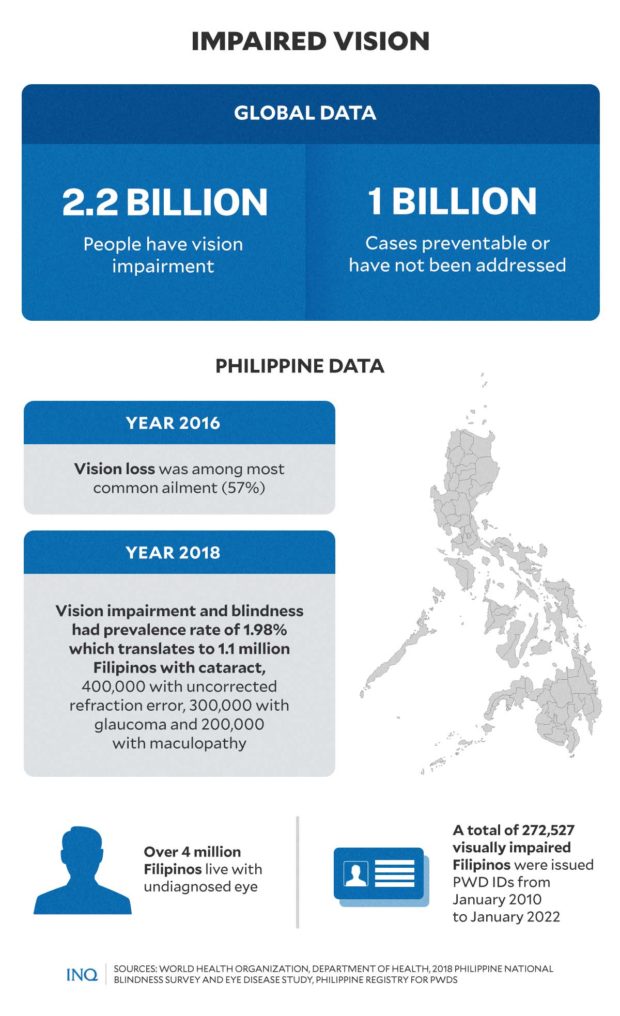 The 2019 world report on vision defined mild, moderate, and severe vision impairment as presenting visual acuity worse than 6/12, 6/18, and 6/60.

While there are various causes behind some harmful eye conditions, WHO stressed in a report on Thursday (October 13) that tobacco use is among the risk factors for the development of vision impairment and blindness.

In observance of World Sight Day (October 13), INQUIRER.net will detail concerning cases of visual impairment in the Philippines, the connection between tobacco use and visual impairment, and how to properly take care of your eyes.

The Philippine Statistics Authority (PSA), in its National Disability Prevalence Survey, found that in 2016, the most prevalent condition for individuals with severe disabilities in the country was vision loss (57 percent).

In 2018, the Philippine National Blindness Survey and Eye Disease Study conducted by the Philippine Eye Research Institute of the National Institute for Health found that vision impairment and blindness rank among the major concerns in the country, with a prevalence rate of 1.98 percent.

According to the Department of Health (DOH), the figures represent 1.11 million Filipinos with cataract, 400,000 with an uncorrected error of refraction, almost 300,000 with glaucoma, and 200,000 with maculopathy. Additionally, there are over 4 million Filipinos living with undiagnosed eye problems that need to be addressed.

The DOH also noted that even though the prevalence of bilateral blindness due to cataracts and errors of refraction has decreased in the past years, there are still thousands of Filipinos with moderate to severe vision impairment.

“We are fortunate that these diseases can be treated with surgery or prescription eyeglasses,” former health secretary Francisco Duque III had said.

He said these are easily preventable through regular consumption of Vitamin A, injury prevention, and immunization against measles and rubella.

As of January 2022, the DOH recorded a total of 272,527 Filipinos who are visually impaired and have already been issued a person with disability (PWD) ID. The majority is from CALABARZON (Cavite, Laguna, Batangas, Rizal, Quezon) and the National Capital Region (NCR).

In a recent report, WHO said that smoking or tobacco use is a risk factor for the development of vision impairment, blindness, and the following conditions:

Those eye conditions could be attributed not only to smoked tobacco products (any product made or derived from tobacco that generates smoke) but also to smokeless tobacco, second-hand smoke, and electronic nicotine delivery system (ENDS)—more commonly known as e-cigarettes. 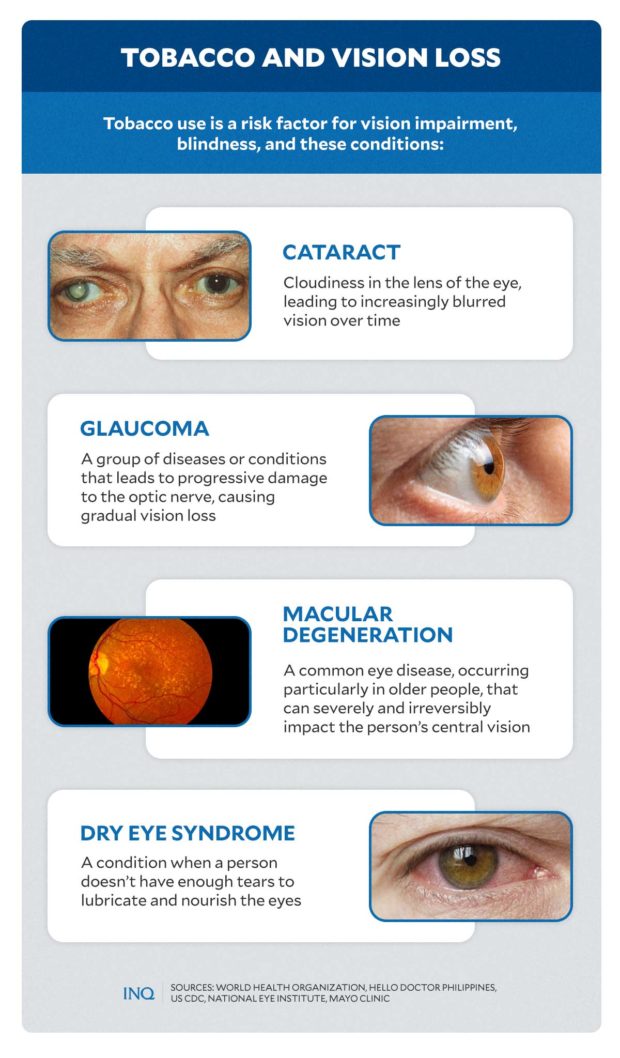 “Many other debilitating health conditions are related to tobacco use, including vision loss,” WHO said.

“With a single breath, the hundreds of toxins in tobacco smoke begin damaging the lungs. These toxins then pass from the lungs to the bloodstream and to various organs throughout the body, including the eyes,” it added.

Although AMD is a common eye disease among older people, WHO explained that smoking was found to be the primary modifiable risk factor for the development and progression of AMD.

“Tobacco smoking generates a local inflammatory response, and cigarette smoke is a strong oxidant. Furthermore, oxidative stress was found to be one of the primary mechanisms for smoking-related damage to retinal structures, contributing to the development and progression of AMD,” it said.

“There are several different types of cataracts, each with their own distinct risk factors, and tobacco smoking plays a part in the development of nuclear cataract, the most common type,” WHO said.

According to studies, smoking appears to generate free radicals, which raises oxidative stress in the lens of the eye. This causes the concentration of plasma in antioxidants to decrease, interfering with their ability to discard damaged proteins.

“Cataracts develop when these proteins build up in the lens, causing vision loss, and surgical removal of the cloudy lens and replacement with an artificial lens is the only option to restore vision,” WHO explained.

New studies have pointed out that smoking may increase the incidence of glaucoma. One study noted that current smokers were found to be at an increased risk of developing glaucoma as compared to those who never smoked.

“Former smokers, as well as non-smokers exposed to second-hand smoke, were not found to be at an elevated risk of glaucoma,” WHO added.

However, WHO emphasized that only a few studies have examined the relationship between tobacco and glaucoma in depth, indicating the need for further research before conclusions can be drawn.

To prevent vision impairment caused by smoking or tobacco use, the WHO recommended these individual-level actions:

Take care of your eyes

WHO also suggested following the “20-20-20 rule”—after 20 minutes spent on a computer screen, look at an object 20 feet away for at least 20 seconds—to prevent eye strain and damage. 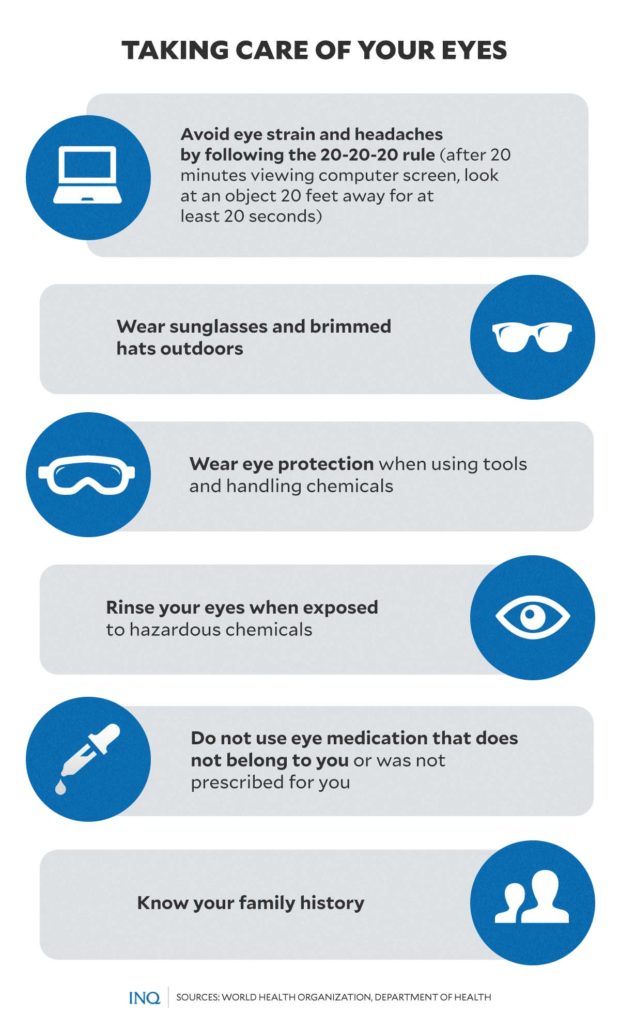 Among the other simple ways to take care of your eyes, according to WHO, include:

WHO also warned against the use of eye medication that does not belong to you or was not prescribed for you.