PH virology institute: What to know 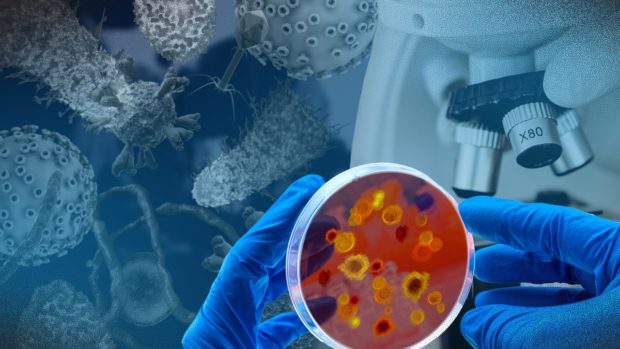 MANILA, Philippines—The COVID-19 pandemic has compelled many nations to establish more high-level biosafety laboratories. Among these countries is the Philippines, which will soon have its own virology and vaccine research facility.

In July last year, in his final State of the Nation Address (SONA), then-President Rodrigo Duterte urged Congress to pass measures establishing the Philippines’ virology institute—expressing optimism that Filipinos can make vaccines in the future.

“We hope to pursue the creation of public entities dedicated to managing emerging diseases. I fervently ask Congress to enact a law creating the Center for Disease, Prevention and Control, and the Virology and Vaccine Institute of the Philippines,” Duterte said.

In the same month, the House of Representatives approved on final reading House Bill No. 9559 or the proposed Virology Institute of the Philippines (VIP) Act.

One year later, the Bases Conversion and Development Authority (BCDA) announced that it had recently signed an agreement with the Department of Science and Technology (DOST) to move “a step closer towards the formation of the country’s premier virology research institute that will strengthen our wall of protection against infectious diseases.”

Although the measure remains pending in Senate, the VIP—which is among the priority of the current administration under President Ferdinand Marcos Jr.—may soon rise in Capas, Tarlac, by the end of 2023 or 2024, according to DOST.

While waiting for the passage of the measure proposing the establishment of the VIP, the DOST has already begun research and preparations. These include the recent negotiation and signing of an agreement with BCDA.

“BCDA recognizes the value of this virology research center in our battle against the COVID-19 pandemic, as well as any other infectious diseases which may endanger us in the future,” said Aileen R. Zosa, BCDA president and CEO, in a statement last Monday (Oct. 10).

Under the agreement, the BCDA has allocated a five-hectare portion of New Clark City land for the VIP construction—“for a period of 50 years, which may be extended for another 25 years.”

The agreement also noted that costs of the site development and construction of VIP facilities—which should be completed within six years from the signing of the deal—will be shouldered and financed by the DOST.

The VIP complex, according to the BCDA, shall comprise the following facilities:

According to the Department of Budget and Management (DBM), the government earmarked P250 million in the 2023 National Expenditure Program (NEP) for the construction of the VIP and its facilities. 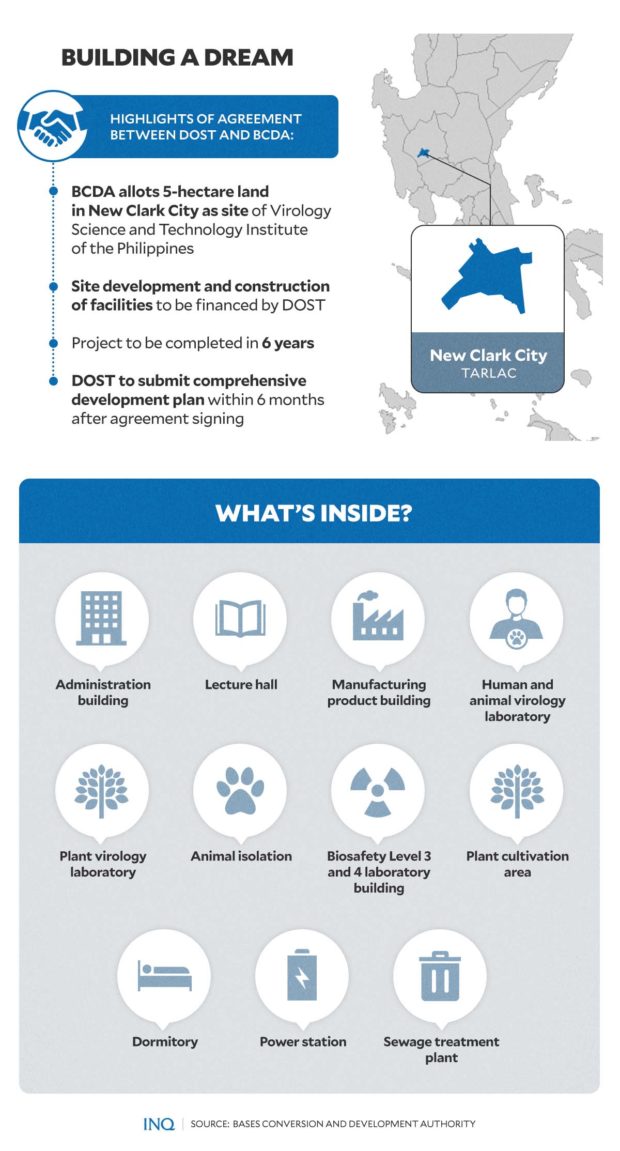 An additional P419.3 million was also allotted for the institute’s research and development projects.

“This ensures that the property will adhere to principles of smart, sustainable, and safe design,” the BCDA said.

Aside from the budget allocated for the construction of VIP, the 2023 NEP has also set aside P419.3 million for the research and development projects of the institute.

According to Science Undersecretary for Research and Development Rowena Cristina Guevara, the virology institute can still be partially operated at the ITDI while waiting for the completion of the VIP facility in Tarlac.

The DOST has already initiated research and development works for the VIP program. These include the six ongoing virology-related projects in partnership with the Baylor College of Medicine in the United States, St. Luke’s Medical Center, and the Research Institute for Tropical Medicine (RITM).

“The six projects will focus on the fields of human, animal, and plant virology and the research areas of diagnostics, therapeutics, and vaccines,” said Guevara.

Guevara said an initial P284 million had been allotted for six projects, including collaborative projects with other institutions.

Earlier this week, both chambers of Congress agreed to pass within the year six of the 32 priority bills endorsed by the legislative Executive Development Advisory Council (LEDAC).

Among these bills was the measure proposing the creation of the Virology Science and Technology Institute of the Philippines.

Under the pending bill, the VIP will be an attached agency of the DOST and will be “the premier research and development institute in the field of virology, encompassing all areas in viruses and viral diseases in humans, plants and animals.”

The VIP is mandated to implement policies, plans, programs, and projects to develop virology science and technology in the country and promote scientific and technological activities for both the public and private sectors. 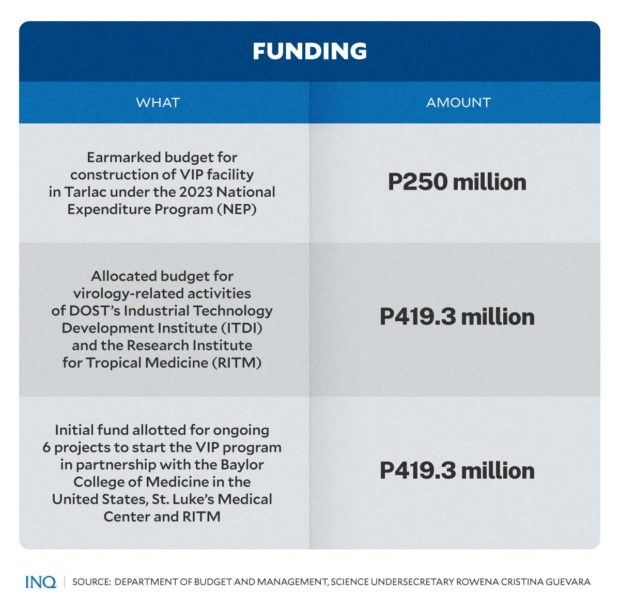 The VIP shall also serve as the lead convener for formulating the National Virology Research Agenda that will encompass research involving viruses of plants, animals, and humans.

The measure also mandates the VIP to provide laboratory and technical services on virology and conduct product research and development in diagnostics, therapeutics, and vaccines.

Science and Technology Secretary Renato Solidum previously said the VIP would also serve as a venue for collaboration with local and foreign virology experts.

It will also be “tied up” with the DOST’s “Balik Scientist Program,” which aims to tap into the ingenuity and expertise of Filipino scientists abroad to help the country “fully develop” the institute.

High-level labs across the globe

Aside from the Philippines, other countries have also started creating plans and constructing more virology institutes to help mitigate the impact of COVID-19 and other emerging endemic diseases.

The government of India, which currently has one operational high-level virology facility, has committed to establishing four new national virology institutes, two of which reportedly handle BSL-4 pathogens.

BSL-4 or Biohazard Level 4 pathogens include hazardous and life-threatening viruses such as Ebola, Marburg virus, Lassa fever, Bolivian hemorrhagic fever, and many other hemorrhagic viruses.

Describing India’s plans as “among the most ambitious,” an article published in Nature journal also reported that the country is currently in the process of constructing five more BSL-3 facilities and is still planning to build nine more.

Four institutions in the country have also pledged to construct BSL-4 laboratories “with the highest level of containment.”

According to the US Department of Health & Human Services, Biosafety Levels (BSLs) “are designations applied to projects or activities conducted in laboratories in ascending order of containment based on the degree of the health-related risk associated with the work being conducted.”

BSL-3 laboratories are used to study infectious agents or toxins that may be transmitted through the air and cause potentially lethal infections.

BSL-4 laboratories are designated for the study of “infectious agents or toxins that pose a high risk of aerosol-transmitted laboratory infections and life-threatening disease for which no vaccines or therapies are available.”

Kazakhstan and Singapore have also announced plans to build their first BSL-4 facilities in Asia. 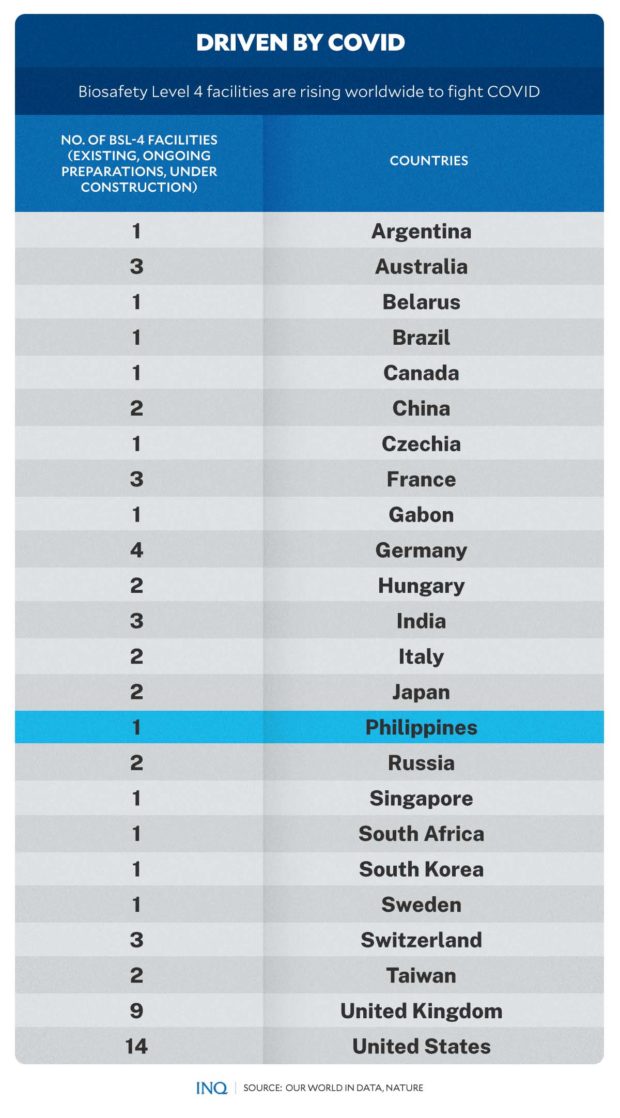 The United States, which already has around 14 BSL-4 facilities, has also committed to adding another. Russia, according to the Nature journal article, likewise announced in 2021 that it will build 15 BSL-4 laboratories, “although the details are scant.”

According to Our World in Data, at least 62 BSL-4 countries are currently located in 24 countries worldwide. These include existing facilities, as well as those that are set to be constructed and completed in the following years.