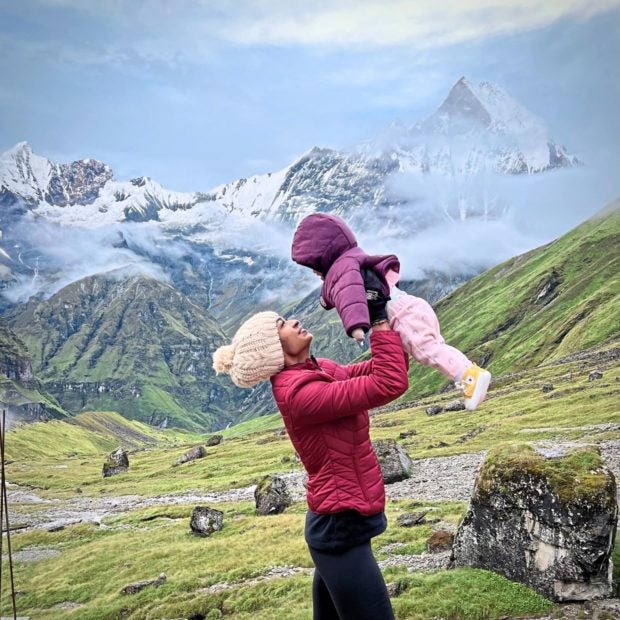 ABC has always been a dream, but I never thought I’d be doing it with my infant, says Sheena. Photo: Sheena Prasannan via The Star/Asia News Network

KUALA LUMPUR — A one-year-old toddler from Sabah has made history as the world’s youngest person to reach Nepal’s Annapurna Base Camp (ABC).

In July, Akshra Ragavendra’s parents, pilot Ragavendra Gopalakrishnan, 32, and yoga instructor Sheena Prasannan, 32, carried her in a hiking harness all the way up to the ABC to celebrate her first birthday.

“My husband and I are avid hikers, and our daughter has been on hikes with us since she was three weeks old. We wanted to do something different for her birthday,” said Sheena, adding that the couple uprooted from Kuala Lumpur to Kota Kinabalu in 2018 after Ragavendra got a job transfer.

“We thought it would be a memorable experience and achievement for our family. We anticipated it would be difficult but we took the challenge as we knew it would make us stronger as a couple,” said Sheena during a phone interview from Kota Kinabalu recently. 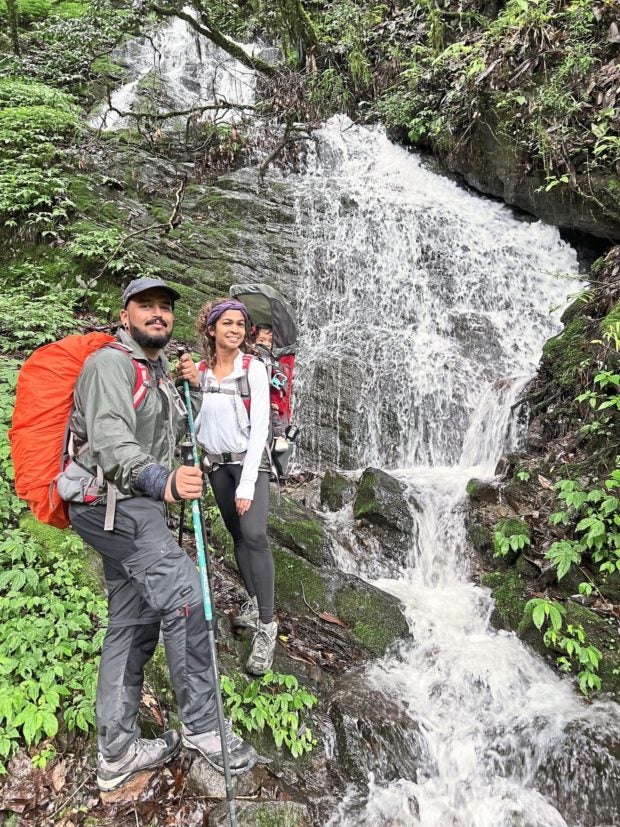 Tantrums, hiking at a slower pace, heavier luggage and lesser sleep… they sometimes come with backpacking with a baby, says Sheena. Photo: Sheena Prasannan via The Star/Asia News Network

They trained for five weeks at the Bukit Padang Hiking Trail at Tun Fuad Stephens Park, Kota Kinabalu to ensure they were fit.

“We trained with Akshra in a 2kg baby hiking carrier. At that point, she weighed 8kg. We took turns to climb up over two thousand steps as we needed to work on speed, stamina and muscle training,” explained Sheena.

The couple started their ascent on July 21, reaching the campsite – which stands at 4,130m – on July 23. It took another three days to make their descent.

“Usually, this trail takes between eight and 10 days. However, we hiked extra long hours as we wanted to reach the peak on her birthday on July 23.

“Thankfully, our daughter did not suffer from altitude sickness. My maternal instincts told me she’d be okay. Akshra managed to adapt well at the ABC.

“Prior to the hike, our training also consisted of high altitude hikes at Maragang Hill in Kundasang and the Liwagu and Bundu Tuhan trails at Kinabalu Park,” said Sheena, who has scaled many mountains, including Sabah’s Gunung Kinabalu, Gunung Batur in Bali, Montserrat in Spain and Fiordland National Park in New Zealand.

The couple never knew Akshra would be the youngest person in the world to reach the ABC until they applied for their hiking permit in Kathmandu.

“An officer told us that she’d be the youngest if she made it. That served as a motivation for us. Along the way, the villagers were very supportive, as they had never seen a baby on the trail. 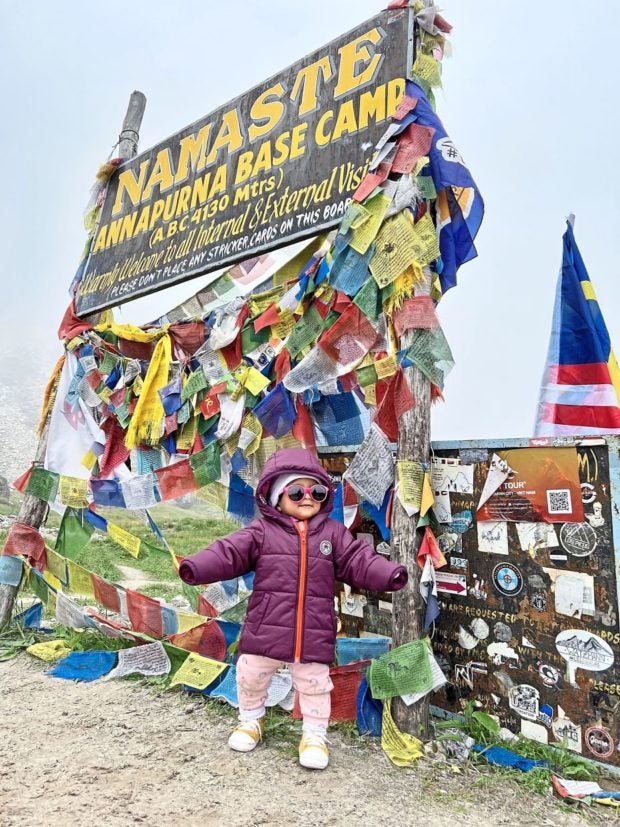 Akshra celebrated her first birthday with her parents at Nepal’s Annapurna Base Camp. Photo: Sheena Prasannan via The Star/Asia News Network

“Many hikers were shocked when they found out we had a baby in tow, thinking it was merely a backpack,” shared Sheena.

“Ragavendra and I were the porters, carrying all our supplies, Akshra’s things and Akshra. I am still breastfeeding my little girl, so that was another reason we could climb ABC with Akshra. There wasn’t a need to carry water and formula milk, which helped to lighten our load,” said Sheena.

The couple also had a guide to accompany them throughout their journey.

But there were, of course, various challenges involved in carrying a young child all the way up to the base camp.

“Tantrums, hiking at a slower pace, heavier luggage and lesser sleep… those sometimes come with backpacking with a baby. But if you love the outdoors and watching your little one see new things for the first time, you may find all that outweighs the complex parts.

“It has been a priceless experience for us. ABC has always been a dream, but I never thought I’d be doing it with my infant,” Sheena added.

Their biggest obstacle was trekking during the monsoon season.

“Never hike during the monsoon. Some people told us that hiking during the monsoon season was okay. We were unfortunate with the weather as it rained everyday. We had to ensure our daughter was well protected and covered her with a raincoat,” said Sheena, adding that they also faced landslides during their descent.

However, all that has not deterred the family from future hiking pursuits. In the pipeline are plans to trek to the Everest Base Camp.
“But we will definitely do it during a proper season,” said Sheena.

We can only imagine Akshra in a hiking harness at EBC soon.

Body of missing US ski mountaineer found in Nepal