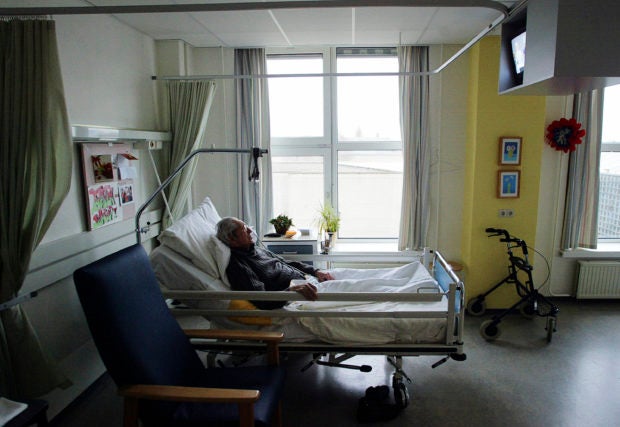 FILE PHOTO: An unidentified man suffering from Alzheimer’s disease and who refused to eat sleeps peacefully the day before passing away in a nursing home in the Netherlands. REUTERS/Michael Kooren (NETHERLANDS)

THE HAGUE — A right-to-die group told judges on Monday that a Dutch law that allows physician-assisted suicide in the Netherlands but criminalizes others who help people end their own lives violates European human rights law and must be declared unlawful.

“We believe it should be possible to provide the means to be able to humanely end your own life if you want to and feel it is time,” Jos van Wijk of Cooperative Last Will, who filed a case together with 29 individual plaintiffs against the Dutch state, said in court.

A lawyer for the cooperative said the case is strategic litigation aimed at forcing the Netherlands to change the laws.

They argue that the current ban on assisting suicide not overseen by medical professionals violated the right to self-determination and respect for private life enshrined in the European convention on human rights.

The Dutch state argued that Dutch euthanasia laws strike a “careful balance between the duty of the state to protect the lives of its citizens and the autonomy of people faced with unbearable suffering with no hope of recovery,” attorney Wemmeke Wisman, appearing for the Dutch state, said.

The Netherlands was the first country in the world to legalize euthanasia and physician-assisted suicide under very strict conditions and when overseen by medical professionals.

Assisting a suicide, or providing a means to commit suicide outside of the strict euthanasia criteria, is punishable with a jail term of up to three years in Dutch law.

Cooperative Last Will has been promoting a suicide powder it calls “Substance X” since 2018 as a cheap and painless way to die.

There is a separate ongoing case before the Dutch courts against a member of the cooperative who is suspected of illegally assisting suicide by selling “Substance X” to at least 33 people who later died.