After fleeing war, Ukrainians struggle to settle around Europe 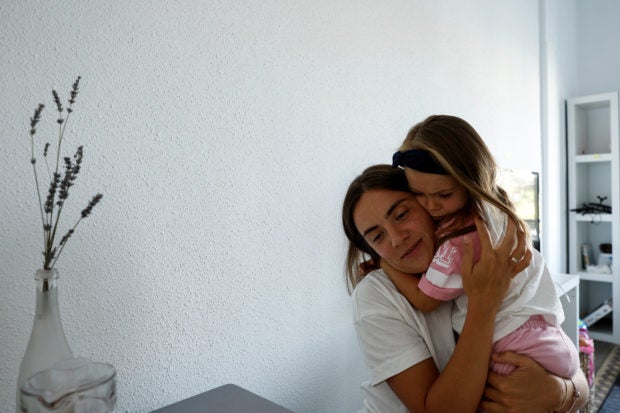 Ukrainian refugee Tatyana Bogkova, 32, embraces her daughter Eva, 4, in the flat they share with other Ukrainian refugees in Madrid, Spain, September 17, 2022. Bogkova, who left with her daughter and mother upon Russia’s invasion of Ukraine while her husband and father stayed behind, is struggling to find a job in Spain. REUTERS

MADRID/LISBON — Ukrainian psychologist Tatyana Bogkova was on a birthday trip in Poland with her mother and four-year-old daughter when Russian troops invaded her homeland earlier this year.

With shells raining on Kharkiv city and her policeman husband staying to fight, the 32-year-old chose to take refuge in Spain, where she quickly translated her CV and took language lessons in hope of a job.

She is still searching.

“I am not afraid of any job but I would like to do what I learned,” Bogkova said in a Madrid cafe near a Catholic Church aid centre, which together with a family offered them a free house until December.

“Every day I look for ideas on how to work while my daughter is at school,” added the Ukrainian, who at least cleans a cafeteria fortnightly with her mother and also volunteers on social media content for a charity.

Bogkova and her family are among 7.6 million Ukrainian refugees scattered around Europe since Russian President Vladimir Putin sent troops over the border and heavily bombarded cities like Kharkiv.

The Ukrainians were initially welcomed with open arms into shelters and homes across Europe, where authorities skipped bureaucratic hurdles at a speed that raised eyebrows among refugees from Syria, Africa and elsewhere.

Yet as the war drags into its eighth month and their hopes of a quick return recede, many feel in limbo and are struggling to make ends meet.

“Initially a lot of people came (to Portugal) feeling depressed because of the war … Now their main issue is the situation here,” said Ihor Ostrovskyi, a 57-year-old academic from Lviv who fled to Portugal shortly after the invasion.

He works at the front desk of a huge warehouse that is Lisbon’s refugee centre and said most of those coming in need urgent help finding a job or a house.

“Nobody knew this was going to last this long,” he said of Portuguese families’ waning enthusiasm to open homes for free.

Portugal has taken more than 52,000 Ukrainians, with authorities running programs to help them pay rent and find houses in a process that some found slow.

Spain has taken in 142,000 under temporary protection and guaranteed them healthcare and employment services from day one, advantages that other refugee groups do not have as quickly.

But the refugees have struggled to find decently-paid jobs, especially those matching their skill sets.

Many lack the local language skills and most are women, many single mothers, because Ukrainian men of fighting age largely stayed behind. Those who do find work are often forced into low-wage sectors such as tourism, agriculture and construction.

In Spain, official data shows only 13% of 90,000 Ukrainians of working age have a job. Some 61% of arrivals had been in higher education, with 28% possessing degrees or professional qualifications, most typically economists, engineers, software developers and entrepreneurs.

In Portugal, job centre IEFP has only 5,523 Ukrainian professionals listed available to work.

Ever-welcoming Germany took in nearly 1 million Ukrainians between February and September but less than 10% have jobs, according to the Federal Employment Agency, although almost 340,000 Ukrainians are registered as seeking work.

Agency spokesperson Susanne Eikemeier said limiting factors were lack of childcare, difficulty recognizing foreign diplomas, and language issues. Since many were experiencing “an existential emergency” after fleeing war, she added, finding work was not always a priority.

In Portugal’s top holiday region, the Algarve, Maria Joao de Deus set up a group to help Ukrainian refugees in the municipality of Lagoa. But accommodation dwindled as dwellings were turned over to tourists during the summer and now jobs are shrinking anyway as the holiday season ends.

“There are people returning to Ukraine due to lack of opportunities,” she said.

The Spanish International Protection Unit, which cares for migrants, is offering language courses and employment programs in an effort to “adjust expectations” to reality and facilitate integration, said general director Amapola Blasco.

But many Ukrainians skip classes or turn down jobs as they do not intend to stay long, she added.

“Many of them are not willing to work in the catering service or care sectors, which is where it is relatively easy to find a job even if your language skills are limited,” she said. “These jobs do not meet their expectations.”

Though 2,000 Spanish companies made jobs available to Ukrainians, few were able to meet the often very specific requirements. “The administration worked well, they quickly had all the permits, but the reality is that there are no suitable positions for them,” said Gonzaga Avello, a consultancy firm founder who tried to help in the hiring process.

Without a job, renting becomes harder.

In Portugal, Ukrainian travel agent Oksana Voloshyna, 42, would like to stay until it is safe to return home but she is intimidated by the country’s bureaucracy.

Refugees were able to register for temporary protection online but most only have an e-mail confirmation.

“The future is unpredictable in Ukraine so we would like to have something more predictable here in Portugal,” she said. “I don’t want to be an illegal migrant.”

The Iberian nations have given one-year protection to Ukrainians, though that can be extended.

Katherine, 34, a model and clothes designer, was recovering from breast cancer surgery when Odessa came under attack. Now she lives in a refugee centre on Spain’s Gran Canaria island with her 12-year-old son and is receiving medical assistance.

Despite suffering depression, she is working on her Spanish and trying to find a job in tourism, so far without success.

“I had a dream life,” she said, strolling on a nearby beach.

Six months into the war, Ukrainian refugee agonizes about returning