To save California coasts, scientists turn to the humble oyster | Inquirer News

To save California coasts, scientists turn to the humble oyster 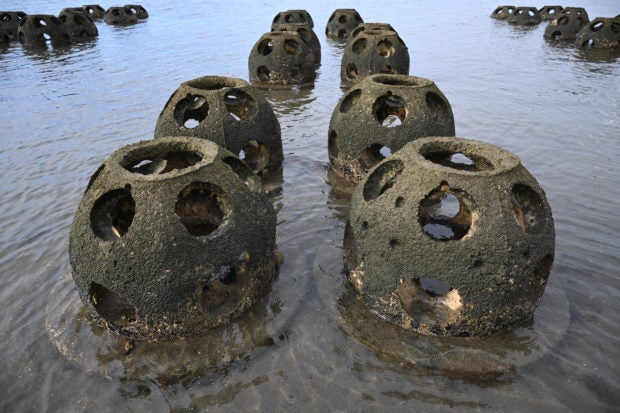 CHULA VISTA , California — There are no pearls growing on the oyster reefs in San Diego Bay, but scientists hope they will yield an even more valuable treasure: protection against coastal erosion wrought by rising sea levels.

Thousands of the tiny mollusks have begun growing on the artificial reefs dropped in the bay as part of a plan to mitigate damage in California’s far south.

“We look at numerous different ways to help combat sea-level rise, and these reef balls are one of the tools in our toolbox to do that,” Eileen Maher, director of environmental conservation at the Port of San Diego, told AFP.

The port implanted 360 structures last December, along a peninsula wedged between the salt marshes of Southern California and the Coronado peninsula — home to the naval air base that inspired “Top Gun.”

These hemispheres weigh 300 pounds (135 kilograms) and look like huge thimbles.

They are made from a mixture of cement, sand and crushed oyster shells — a crucial ingredient that attracts living oysters to make their home there.

After 10 months in the water, the reefs are covered with a greenish silt, which hides thousands of still-microscopic oysters, says Maher.

Eventually, the dozen scientists working on this pilot project hope to see the formation of real oyster reefs, which they believe will have a genuine impact on their local environment.

The reefs are much more than a natural bulwark against tidal erosion; their bivalve occupants are all miniature filtration plants that are essential to the marine ecosystem.

That’s because to capture the nutrients an oyster needs to survive, each one filters around 50 gallons (190 liters) of water every day, said Maher.

“They help remove that turbidity out of the water and help clean the water, which will provide additional benefits to eelgrass, the submerged aquatic vegetation,” she said.

“The more eelgrass sits in the bay, the less chance there is of the shoreline eroding, because it helps — any plant will help prevent shorelines from eroding.”

And like the oysters, these long-filament seagrass beds will also provide a crucial food source for the 80 species of fish and 300 varieties of birds that make their home in the area.

By 2050, sea levels around California are expected to have risen 20 centimeters (eight inches), according to a National Oceanic and Atmospheric Administration (NOAA) study released early this year.

This would drastically increase the frequency of flooding on the West Coast, which will also occur more often due to storms and heavy rainfall events exacerbated by human-caused climate change.

And rising seas will worsen the erosion that threatens California’s coastline.

Around San Diego, this future is already apparent.

To the south, the streets of Imperial Beach are regularly flooded during high tides. An hour’s drive to the north, the rail line that carries the “Pacific Surfliner” has just been closed at San Clemente, where the rocks that support it are sinking because of erosion.

In this context, “We have to make sure that we’re resilient,” said Jason Giffen, vice president of planning and environment for the Port of San Diego.

The $1.3 million oyster reef project is being evaluated over five years. Similar schemes have been established in San Francisco and New York.

The oyster barriers work only in areas of shallow water, Giffen said.

Elsewhere, the port is exploring other solutions.

In the northern part of the bay, small hollow reinforcements have been attached to the piers.

They not only offer stability but provide refuge to algae, fish and shellfish, helping to bolster biodiversity.

Currently, about 70 percent of the shoreline around San Diego Bay has some type of artificially contructed rock protection.

“We can look at replacing in the long run that infrastructure with something that’s more biologically and environmentally sensitive and actually would be a value-add in terms of environmental quality,” said Giffen.