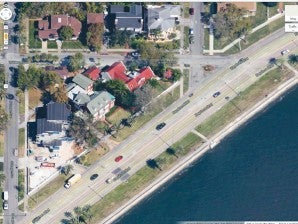 SEAFRONT PROPERTY Chief Justice Renato Corona categorically denies owning “any property in the US” but admits these were used as “temporary mailing addresses” while he and his wife were on a visit to the United States. One of the alleged properties that blogger/journalist Raissa Robles claims belongs to the Chief Justice is a seafront house in Tampa, Florida. PHOTO FROM RAISSAROBLES.COM

A day after dismissing as “not true 101 percent” reports that his family owned two properties in the United States, impeached Chief Justice Renato Corona on Monday admitted that one of his daughters bought a “dirt cheap” house in America.

“[This is] another black [propaganda],” Corona said, referring to the latest revelation of journalist Raissa Robles in her blog entry.

In a text message to reporters, the Chief Justice said his daughter acquired the property “dirt cheap at the height of the mortgage foreclosures in the US.”

He said his daughter just put a 10-percent down payment to acquire the house “with 30 years to pay.”

“I don’t think she bought it in 2008. Anyway, she is earning very well as a PT (physical therapist) and is in fact working at two jobs. And her husband is also earning well,” the Chief Justice said.

Corona did not identify who between his two daughters was the registered owner of the house, but his defense lawyer, Tranquil Salvador III, said the Chief Justice was referring to his elder daughter, Maria Charina.

ABS-CBNnews.com reported that Robles said on ANC on Monday that she had information that Maria Charina bought the US property 22 days before she acquired a P6.2-million property [a 203-square-meter lot] in upscale McKinley Hill, Taguig City.

“The property is very intriguing because it was bought shortly before the McKinley property was bought. That was in 2008. So it was CJ Corona who brought in his family into the picture so I think it is very pertinent, relevant and material that people follow the money trail and that I think makes his dollar bank deposits very relevant to the case,” she told [email protected]

Robles said it was only Maria Charina who was the sole owner of the property because her husband had signed a waiver.

“The clearest thing though is that it is only the daughter who owns the property. It is not a conjugal thing. The husband signed a waiver to the property. You wonder why the arrangement was that way. And the property was bought 22 days before the McKinley property was bought. You ask yourself—why would someone take two liabilities so close to each other, almost at the same time? Is this a period of recession in the US?” she said.

On her updated blog entry, Robles posted on Monday documents about Maria Charina Corona’s acquisition of the property in the City of Roseville, Placer Country, California.

Robles said at least 10 people gave her leads about the Corona property and at least one provided evidence.

In her previous blog post titled “Does Renato C. Corona have a clone living in the US?” Robles said a certain “Renato C. Corona” was linked to two addresses in Tampa, Florida, and Mountain View, California.

Corona denied Robles’ claims, saying these were just their “temporary mailing addresses” while they were on a visit in the United States. He also categorically said that “we do not own any property in the US.”

Asked why the Chief Justice flip-flopped on his earlier statement, Salvador said Corona was just referring to himself and his wife Cristina.

“When he said  ‘we,’ it pertained to the Chief Justice and his wife as a couple,” Salvador said at a news briefing.

Salvador said there was no reason for Corona to include the California property in his statement of assets, liabilities and net worth “because that house was bought by his daughter using her and her husband’s hard-earned money.”

“We categorically deny that the Chief Justice owns the properties as stated in that blog report [of Robles],” said Rico Paolo Quicho, another defense spokesperson.

Salvador, however, could not confirm if Charina had indeed purchased the house just 22 days before she acquired a multimillion-peso condominium unit in McKinley Hill in Taguig City.

“I’m not telling you to believe us. You can check it out if (Charina) was the owner of that property and the terms of agreement for the purchase,” Salvador said.

Quicho took exception to insinuations that Charina could have just acted as a dummy for her father and that the property may have been ill-gotten.

“It is really alarming and saddening that anybody can just throw accusations and write stories even without factual basis,” Quicho said.

He said Robles’ articles were “not investigative reports, but almost like fictional stories.”

“The Chief Justice and his wife instilled decency, discipline and good values to their children. I’m sure they have the capacity to buy properties or anything they want using their own money,” he said.

Apparently fed up with the latest avalanche of accusations against the Chief Justice, Salvador said the defense was “urging” the prosecution to amend its impeachment complaint and include the supposed US properties in the articles of impeachment.

“If they believe that those US properties were owned by the Chief Justice, then it would be better if they include that in the articles of impeachment. I’m not challenging them, but I urge them to amend the impeachment complaint if they really believe in the relevance of this,” he said.