Nurses’ lament: ‘Gov’t not giving us reasons to stay’ 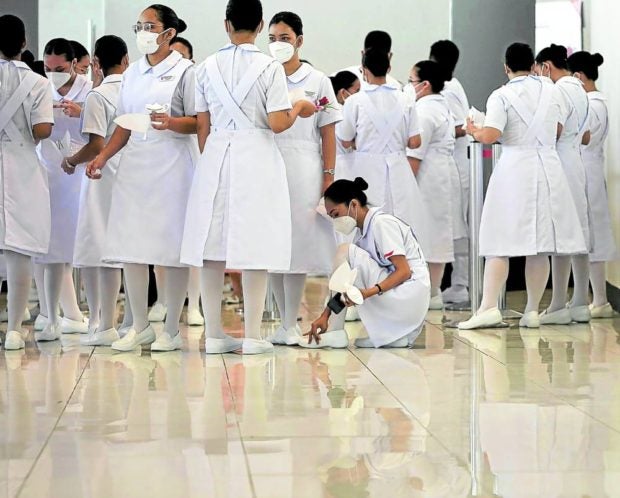 INTERGENERATIONAL | One in 20 nurses in the United States is a Filipino, following decades of migration of nurses from the Philippines, which is now lacking 106,000 nurses, to American soil. Here, a new batch of future nurses from Centro Escolar University are at the World Trade Center in Pasay City for their capping and pinning rites, on Sept. 30. (Photo by RICHARD A. REYES / Philippine Daily Inquirer)

MANILA, Philippines — Like many children of Filipino migrants, Roxanne Tenorio, a registered nurse who studied in the Philippines, had an exit plan ready even before receiving her diploma.

Upon graduating from the University of Santo Tomas (UST) College of Nursing in 2012, Tenorio followed in the footsteps of her mom, Raquel, who had first worked as a pediatric intensive care unit (ICU) nurse in a Manila hospital before moving to the United States for the promise of a better life.

Tenorio’s dream was to become an architect or an engineer. But world events changed her mind after she finished high school in 2008: a great recession in the United States precipitated a global financial crisis, forcing many American professionals, including architects and engineers, out of their jobs.

“So my family convinced me to try out nursing first because it is one of the safest career paths when it comes to job security in the US,” she said.

Tenorio, 30, now works in Arizona, where “nurses are well-respected in the society.”

Raquel wanted to become a flight attendant or a chef, “but my grandmother convinced her to become a nurse because of job security,” Tenorio said.

The mother and daughter exemplify the intergenerational appeal of nursing that has led to this glaring statistic: one in 20 nurses working in the United States is a Filipino.

The Tenorios are among 150,000 Filipino nurses who have immigrated to the United States since the 1960s.

Not surprisingly, the Philippines now has a “shortage” of about 106,000 nurses, Health Undersecretary Maria Rosario Vergeire, officer in charge of the Department of Health (DOH), said last week.

To address the drain of nursing professionals, the DOH is proposing to retain the 7,000 annual deployment cap for new-hire medical workers abroad.

But the supply of nurses isn’t the problem, said Jocelyn Andamo, secretary general of Filipino Nurses United (FNU). “It’s just that the government has not been giving us reasons to stay,” she said.

Andamo said the “push factors” forcing nurses to leave, such as high nurse-to-patient ratio and low wages, were exacerbated by the pandemic and the government’s “slow, undignifying” response to health-care workers’ concerns.

Isn’t it ironic, she mused, that more than 124,000 Filipino nurses here were classified by the DOH as being under “unspecified practice,” meaning they are unemployed or working in other fields?

The government could have tapped this group to fill vacancies, FNU said.

Instead of “blackmailing” nurses from leaving, the government must put in effort to retain those who have opted to stay in the country, the group said.

The Professional Regulation Commission listed 915,219 registered Filipino nurses in December last year, but according to the DOH, more than a third of them, or 316,405 individuals, have moved overseas.

Tim Gavia, another nursing graduate from UST, was raised by his grandparents in Nueva Ecija, while his parents were working in Los Angeles, California, where he was born.

Family was a big factor in his choice to pursue nursing. Hence, his plan was set after his graduation in 2012: go back to LA after college.

“Nursing is the degree that made most sense for me financially. It was the safest degree in the Philippines that would [make it easier to] transfer to the US,” said Gavia, 30, now a nursing supervisor at Mayo Clinic in Arizona.

Nurses in the Philippines and in the United States may have the same level of education, but there’s a stark difference in the quality of life between them.

At Mayo Clinic, one of the top healthcare and research institutions in the United States, all employees are treated the same regardless of ethnicity. The nursing salary “is well adjusted to cost of living,” Gavia said.

“During the pandemic, nurses [here] had all the resources we needed. I recognize that this is not the case everywhere,” he said.

At the hospital where she works, Tenorio also enjoys a “good salary” and “schedule flexibility.”

“There was a great need for nurses [during the pandemic], so there are instances when nurses had to handle more than their usual patient load. Fortunately, most health-care institutions gave lucrative bonuses for nurses who can work overtime to help with this,” she said.

That wasn’t the case for 27-year-old Alessandra Jose, who, like Gavia and Tenorio, finished nursing at UST.

She was first hired as an operating room (OR) nurse at St. Luke’s Medical Center in Quezon City, one of the country’s biggest and priciest private hospitals.

But Jose found that working at a famous hospital did not mean a salary befitting her almost 12-hour workload.

Some nurses, said Andamo, received only “thank you’s” and “God bless” on top of their monthly salary for their extra work.

In nursing, seniority matters.Those assigned to the OR, for example, would have to start at the bottom, as a scrub nurse assisting doctors, before they could enter the recovery room and eventually, hold managerial positions.

But being a nurse did not always inspire respect. “Some doctors do not consider us as their equals,” Jose said.

At the height of the pandemic, the exodus of senior nurses who found work abroad had left their younger colleagues overburdened with work and delayed benefits.

Not long ago, Jose and many of her fellow nurses quit their jobs at the hospital.

Jao Clumia, president of St. Luke’s Medical Center Employees Association, observed a trend in the hospital of new hires resigning within a few months because of heavy workload or to look for better opportunities abroad.

Although the hospital has been hiring new nurses, staffing issues persist. Some nurses have gone “Awol,” or absent without leave.

“New hires would leave because they were forced to tend to enormous responsibilities left by senior nurses. Newbies won’t be able to handle that,” Jose said.

In Metro Manila, a nurse at a private hospital receives a monthly salary of P17,000, equivalent to the daily minimum wage of P570.

Salaries are even lower in the provinces, noted FNU.

In government hospitals, the base salary for nurses is P35,000 under the Philippine Nursing Act of 2002.

“But in public hospitals, working conditions are dire; their workloads are heavier,” Andamo said.

At the House of Representatives, nurses’ groups are lobbying for a bill filed by Makabayan lawmakers to set a minimum monthly salary of P50,000 for nurses in public and private hospitals.

FNU and other health workers’ groups believe that nurses deserve a higher pay — an acceptable living wage — as professionals who risk their lives in the line of duty.

The salary of nurses in the Philippines is among the lowest in Asia, according to Andamo.“After us is Vietnam, where the salary is P60,000. With a P50,000 salary, we can reduce the number of nurses who want to work abroad. Given the chance and proper working conditions, Filipino nurses will not leave the country,” she said.

But there’s another battle ahead.

The DOH is facing a budget cut for some of its programs in 2023, including funds to cover the COVID-19 benefits and allowances of health workers. The department had asked for P76 billion but received only P20 billion.

“[President Marcos] said that Filipino nurses should be given recognition, but that’s all talk. We thought raising the nurses’ salary was doable within that period,” said Andamo, adding:

“After his 100 days in office, we have not seen concrete steps toward this.”

Hospitals: Where have all the nurses gone?