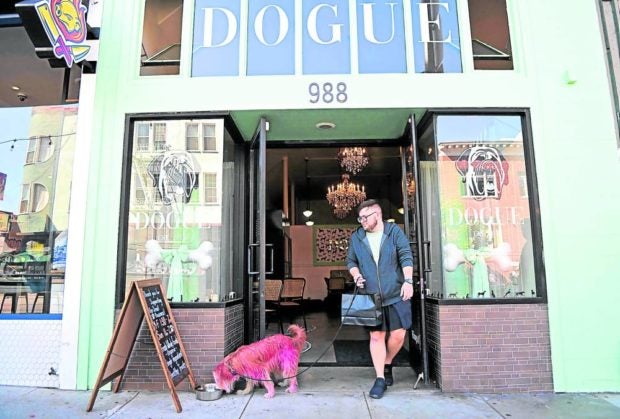 SAN FRANCISCO—Does your dog like fine dining? Does your pooch like posh nosh? Then one US eatery has just the thing.

At Dogue in San Francisco, four-legged friends have their pick of the very best foods available, with a menu designed to please even the most exacting canine palate.

During the week, that means an extensive selection of immaculately crafted pastries (from the “pawtisserie,” naturally) washed down with one of three “dogguchinos”—creamy creations infused with spirulina or charcoal.

On Sundays, Dogue transforms into the Bone Appetite Cafe, where pup patrons can sample a three-course tasting menu for $75.

“We do make pastries inspired by some of the finest chefs, some of my favorite chefs in the world.

“You know, we have the saying, ‘You eat with your eyes first, before you even take a bite.’ And in regards specifically to the dog food, it’s always been a goal to make it look as if I wanted to eat it,” Massarweh said.

Offerings when AFP visited included the petit gateau with shredded chicken and pastured cream, the red rose with wild antelope heart, and the golden paste cake with organic coconut and raw unfiltered honey.

Massarweh, a classically trained chef who cut his teeth at a top San Francisco restaurant, said the showpiece pastries are just a small part of the business.

“The whole essence of Dogue is fresh whole food for dogs” with bespoke menus available for pet parents to take home.

The inspiration for the new venture came from a pet English mastiff that Massarweh and his wife had in 2010, who didn’t enjoy store-bought food.

The new eatery—“dogue” is French for “mastiff”—is “kind of an homage to my roots in classical French cuisine, and at the same time, a gentle nod and almost a tribute to the dogs, the English mastiffs that my wife and I have and love so much.”

The establishment of a fancy doggy diner in San Francisco, where locals claim there are more pets than children, has raised eyebrows in some quarters.

Critics said it was emblematic of the skewed priorities of a city with rampant homelessness and soaring levels of drug addiction.

But what about the four-legged clients?

“Dogs are amazing, because what you see is what you get, right? There’s no facade,” he said.

“If they like it, they like it. If they don’t, there’s nothing you can do. They’re not going to eat it.”

READ: For one night only, ‘Doggo-stacion’—a five-course dining experience for your dog