In Cavite town, a pitiful version of ‘umbrella academy’ 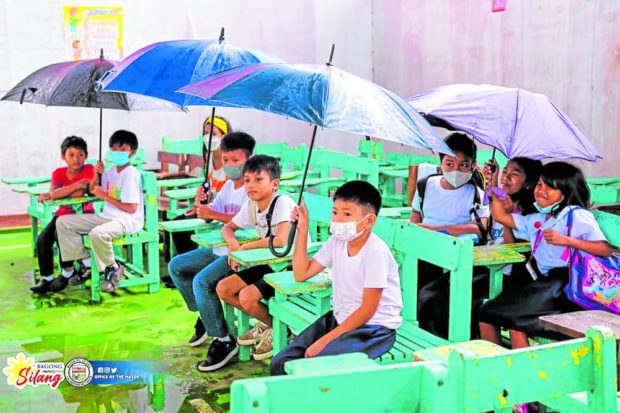 MULTITASKING A classroomscene shared on Facebook by Mayor Kevin Anarna of Silang, Cavite.

When it rains, Lucsuhin Elementary School in Silang, Cavite province, turns into an “umbrella academy”—but the pitiful scene is nowhere close to the popular Netflix superhero series that bears such title.

The students here attend classes with open umbrellas in one hand and pencils and notebooks in the other, using makeshift classrooms in a covered (but not totally dry) basketball court.

According to Silang Mayor Kevin Anarna, this was because construction of a new three-story public school building was left unfinished by the contractor after the elections, even though it was already fully paid by the local government to the tune of P37 million.

“We must stop electing corrupt politicians so this will never happen again,” he said in a Facebook post on Wednesday.

The Department of Education (DepEd) could only do so much as the school was constructed by the local government of Silang.

At a press briefing on Friday, DepEd spokesperson Michael Poa said the agency was “very concerned for the learners” and had started coordinating with the local government to address the problem at Lucsuhin.

The students practically have to multitask—doing schoolwork while holding up umbrellas—in spaces enclosed by panels of plywood. There are tarpaulin sheets meant to shield them from the wind, but not completely from the rain. They still get their feet wet as rainwater collects in puddles on the floor.

Anarna said the students had nowhere else to go for their classes as the contractor—which he did not name—had already demolished the old classrooms to make way for the new school building, which he said was only about 20 percent complete.

During his inspection of the site on Tuesday, Anarna learned that some of the students had fallen ill and missed school after being drenched in the rain during previous classes.

Without naming names, he said the Silang municipal government would take legal action against certain “greedy and abusive” individuals once it had received an official audit report on the school-building project.

The mayor also called on Silang residents to alert his office about other unfinished or abandoned public infrastructure projects.

“We need to stop corruption so that the next generations may not suffer. We should not choose leaders who are pursuing only their selfish interests even if it means putting their constituents in harm’s way,” he said.

In the last elections, Anarna defeated Omil Poblete in the mayoral race, ending the decades-long dominance of the latter’s family.

The Pobletes dominated local politics from 1986 to 2022, except from 1994 to 2004 when the town was governed by Ruben Madlansacay.