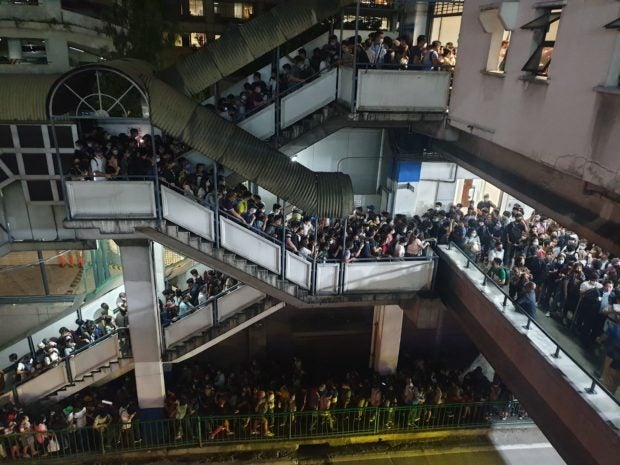 Long lines of commuters formed at the Ortigas Station of MRT 3 while the signaling system glitch was being fixed. (Photo courtesy of Cha Padilla)

MANILA, Philippines — A technical glitch in the signaling system of the Metro Rail Transit 3 (MRT 3) forced slower commuter servicing at some stations on Tuesday, causing long lines during the rush hour, from around 4:30 p.m to 6 p.m.

According to an MRT 3 advisory, the “provisional service” was implemented at 4:59 p.m. between the North Avenue Station and Shaw Boulevard Station.

“This is due to a technical glitch on the signaling system reported along a track circuit approaching Taft Avenue station,” it said.

A netizen posted a snapshot of the line at Ortigas Station taken at 6:13 p.m. showing hundreds of commuters at an extremely long line.

In an updated advisory, the MRT 3 management said that the provisional service was lifted at around 6:13 p.m. to accommodate passengers going to and from the Taft Avenue Station, allowing the single platform (northbound) of that station to be used.

The glitch was then resolved at around 6:53 p.m., and full operations were restored between the North Avenue Station and the Taft Avenue Station.

But despite the resumption of operations, commuters continued to struggle with the long lines, as shown by another netizen, Tan, who posted photos on Twitter of the Taft Avenue Station at 7:26 p.m.

Tan told Inquirer.net that he was on his way home from school when he noticed that several commuters had opted to abandon riding the MRT 3 train due to the long lines.

“That’s unusual because mostly at that time only a few people get off from that station and almost everyone gets on. I think the others just went back because the queue was really long,” Tan said in a mix of English and Filipino. “We were separated into three lines, and ahead of the two lines, there’s another line that’s already a mess.”