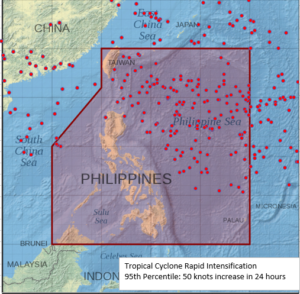 A map of typhoons that reached rapid intensifications(92.6 kilometers per hour within 24 hours) from 1977 to 2021, developed by wind engineer Joshua C. Agar, posted on his Twitter account.

Agar, an engineering faculty member at the University of the Philippines – Diliman, told INQUIRER.net on Friday that climate change “increases the moisture on which typhoons feed upon.”

He pointed out that there has been an increase of wind strength in typhoons since 2011, with Karding following the growing trend.

(Expect typhoons like Karding that are small in size but with super destructive winds near the eye).

Agar noted this increase when he analyzed and mapped the past typhoons and  rapid intensifications in the country.

The map, based on data from 1977 to 2021 from the Japan Meteorological Agency, showed that 322 out of 1148 typhoons had rapid intensification.

Agar’s map, however, only accounts for a higher threshold of rapid intensifications, since it is based on statistical analysis that identified unusually strong typhoons that reached ten minute sustained wind speeds by 92.4 kilometers per hour within 24 hours.

According to the Philippine Atmospheric, Geophysical and Astronomical Services Administration, rapid intensification is declared when maximum sustained winds increase by more than 65 kilometers per hour within 24 hours.

While rapid intensifications of typhoons are not new in the Philippines, Agar noted that the winds are getting stronger.

He pointed out that government agencies should learn to strengthen and retrofit evacuation centers in preparation of the intensifying typhoons.