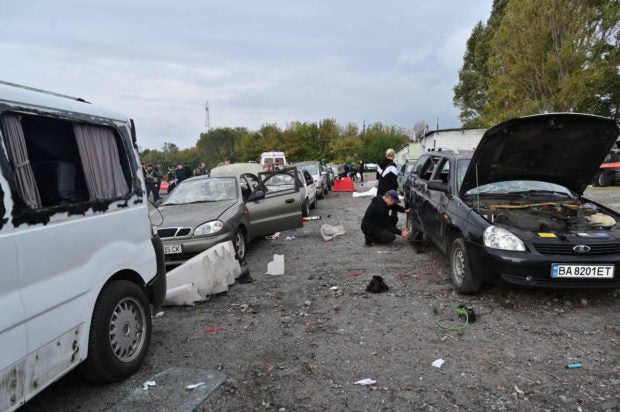 Cars destroyed by a Russian missile strike, that hit a convoy of civilian vehicles amid Russia’s attack on Ukraine, are seen in Zaporizhzhia, Ukraine September 30, 2022. REUTERS/Stringer

ZAPORIZHZHIA, Ukraine — Dozens of civilians were killed or wounded in what Kyiv said was a cynical Russian missile strike on a convoy of civilian cars in southern Ukraine on Friday, leaving bodies strewn across the ground.

The convoy had been assembling at a car market on the edge of the city of Zaporizhzhia, preparing to leave Ukrainian territory controlled by Kyiv to visit relatives and deliver supplies in an area occupied by Russia, officials said.

Car windows were blown out by the impact of the missile strike, and their sides were sprayed by shrapnel, a Reuters witness said.

One body was leaning from the driver’s seat into the passenger seat of a yellow car, the left hand still clutching the steering wheel.

“The enemy is raging and seeking revenge for our steadfastness and his failures. He cynically destroys peaceful Ukrainians because he lost everything human long ago,” President Volodymyr Zelensky wrote on the Telegram messaging app.

“Bloodthirsty scum! You will definitely answer. For every lost Ukrainian life!”

Oleksandr Starukh, the Zaporizhzhia region governor, put the initial toll at 23 killed and 28 wounded in the attack, carried out hours before President Vladimir Putin was due to proclaim Russian rule over Zaporizhzhia and three other provinces where Moscow has seized territory since invading Ukraine.

Andriy Yermak, head of Zelensky’s office, later said 25 had been killed and 50 wounded in what he said was an attack by a “terrorist state”.

Russia denies deliberately targeting civilians. Vladimir Rogov, an official in the Russian-installed administration in the Zaporizhzhia region, blamed the attack on Ukrainian forces.

Police Colonel Sergey Ujryumov, head of the explosive disposal unit of the Zaporizhzhia police department, said the car market had been hit by three S300 missiles.

Ujryumov told Reuters that the Russian military “know that columns are formed here to go to the occupied territories. They had the coordinates.”

“It’s not a coincidental strike. It’s perfectly deliberate,” he said.

Corpses on the ground

The vehicles were packed with the occupants’ belongings, blankets and suitcases. Plastic sheets were draped over the bodies of a woman and young man in a green car. A dead cat lay next to the young man in the rear seat.

Two bodies lay in a white mini-van in front of another car, its windows blown out and the sides pitted with shrapnel.

The corpse of an elderly woman lay nearby, her shopping bag next to her.

Another woman, who gave her name as Nataliya, said she and her husband had been visiting their children in Zaporizhzhia.

“We were returning to my mother who is 90 years old. We have been spared. It’s a miracle,” she said, standing with her husband beside their car.

Nikola Rusak, a 62-year-old delivery driver from the southern province of Kherson, survived the attack unscathed as he slept in his minivan, parked about 20 metres (yards) from a row of automobile parts shops that were hit by a missile.

“I could not understand what was happening,” he said. “I got out and saw people running. I was in a daze. I was just standing there frozen. I didn’t know what to do,” he said.

Rusak said he had been sleeping in the vehicle for five days after dropping relatives in Zaporizhizia, waiting for a phone call telling him to join the convoy for the trip home to care for his elderly mother.