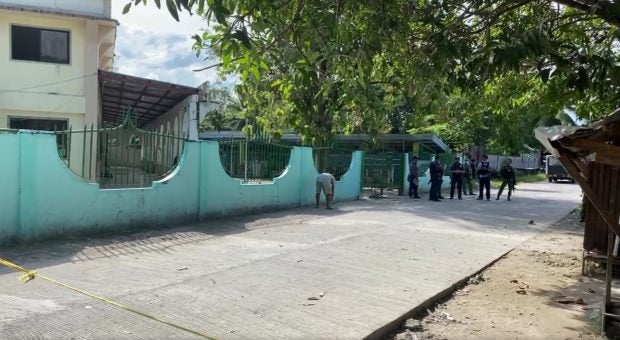 Police cordoned off the site where Datu Jamael “Datu Jam” Q. Sinsuat was shot dead as he was leaving a mosque. (Photos from Radyo Bandera Cotabato)

Mayor Datu Lester Sinsuat said Datu Jamael Sinsuat, his uncle, was shot by still unidentified gunmen while leaving a mosque in Barangay Dalican at around 12:30 p.m.

“I, my family, together with all the constituents of the Municipality of Datu Odin Sinsuat, Maguindanao strongly condemn in the highest form the brutal killing of my uncle, Datu Jamael Q. Sinsuat, in broad daylight right after the Friday Jumuah prayer which happened today,” Mayor Sinsuat said in a statement on Friday.

“This cruel and cowardly act… hold(s) no place in our society and community,” Mayor Sinsuat added.

He called on police authorities to conduct an extensive investigation of the incident “to make the perpetrators answerable for this dastardly deed.”

Datu Jamael was the official candidate of the United Bangsamoro Justice Party of the Moro Islamic Liberation Front who ran but lost in the recently held local elections.