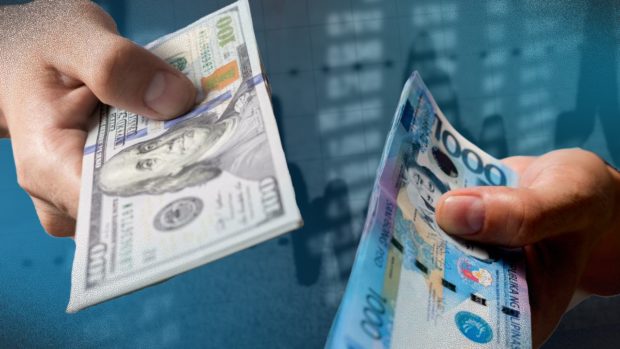 MANILA, Philippines—These past few weeks, news about the continuing slide of the Philippine peso has brought concern to many about the country’s economic situation, with some weighing the benefits and risks of depreciation.

On Tuesday (September 27), the local currency ended at P58.99 against the US dollar—a centavo shy from the P59:$1 level—marking a new record low.

Most of the peso’s losses so far this year happened in the past three months, when the peso started depreciating swiftly after hitting 53:$1 on June 10.

The recent peso depreciation came after the US Federal Reserve hiked its benchmark rate by 75 basis points in “a big effort to mop up all the excess money in circulation,” according to economics professor and former socioeconomic planning secretary Cielito Habito. 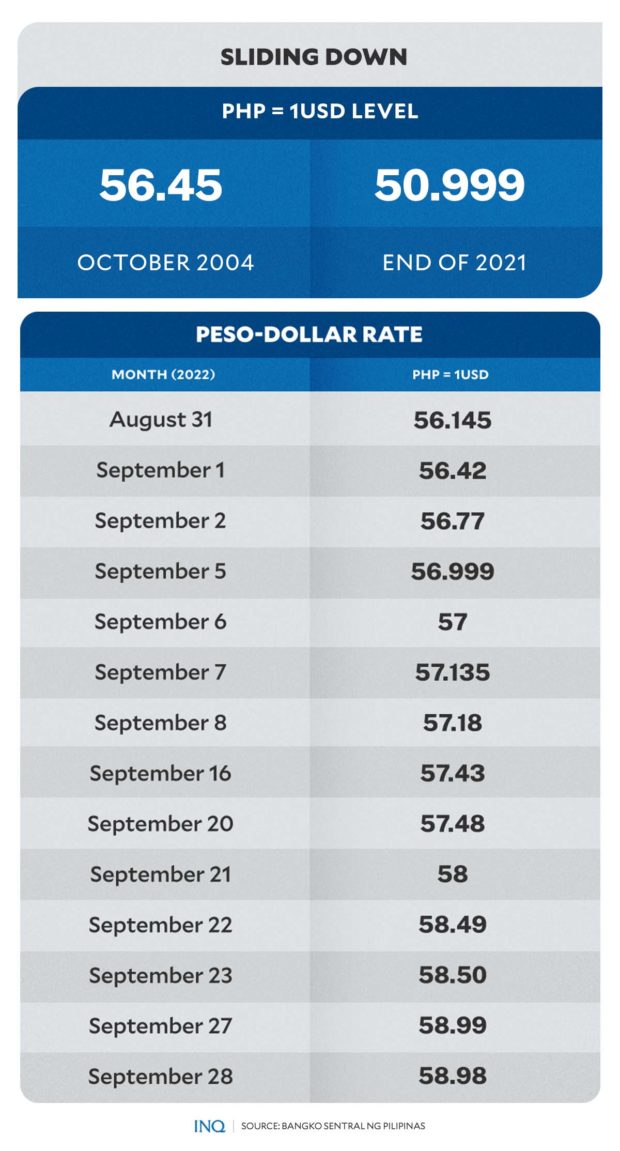 Amid the continued weakening of the peso, one question emerges: Should Filipinos be worried?

Recent news about the peso depreciation often uses the terms “weakening peso” or “falling peso” and often highlights the trend in the current peso-dollar exchange rate through terms like “all-time low” or “new record-low.”

“I don’t like using the term ‘weak peso’ or ‘falling peso,’ it somehow implicates something negative. I would rather use the [terms] depreciate or appreciate. The peso is depreciating or appreciating against the foreign currency or the US dollar,” Habito told INQUIRER.net.

“What I like about those terms is that there is no connotation that [the current exchange rate] is negative or positive. When people say ’[the Philippine peso] is the worst performing currency in the ASEAN,’ it looks as if we are in a dire position,” he added.

“There are winners whichever way the peso goes, and that’s what we have to consider before we use terms like weak, worst, or strong. That’s why I’d rather use neutral terms like appreciating or depreciating,” Habito said.

There are winners—or gainers—and losers when it comes to the depreciation of the local currency, according to Habito.

The peso depreciation means more pesos exchanged for each dollar earned. That is why those who depend on remittances from abroad—such as those from Overseas Filipino Workers (OFWs) who earn money in foreign currencies— benefit when the peso depreciates since they would get more pesos for every dollar sent to them.

Among the gainers are also exporters who likewise receive more pesos for their foreign currency earnings. These include workers in export industries that involve electronics—which Habito said is the country’s number one export—and agriculture—where a huge chunk of the country’s exports come from.

“Many farmers will benefit in terms of the increased peso value of their exported products. Producers of agricultural products will benefit, especially if their imported component is not that big,” he said.

However, even non-exporting producers can win as the peso depreciates since the falling peso has made imported, competing products costlier.

“One thing people often forget is that even producers who are not necessarily exporting but are selling to the domestic market actually also benefit because the imported competing goods become more expensive—since prices of competing imports will also rise because of the higher exchange rate,” Habito told INQUIRER.net.

The tourism industry is also considered a direct winner in this scenario. As Filipino goods and services become cheaper and more attractive in the eyes of foreigners, more foreign tourists are attracted to visit the country since they “would find their money going a long way here.”

Aside from those in tourism services, those in the business processing outsourcing (BPO) industries and information technology and business process management (IT-BPM) sector could also get a boost from peso depreciation since they earn dollar revenue in exchange for their services.

On the other hand, losers in the peso depreciation are importers and consumers of imported goods—“as the peso cost of every dollar’s worth of imports would rise, leading to higher prices.” 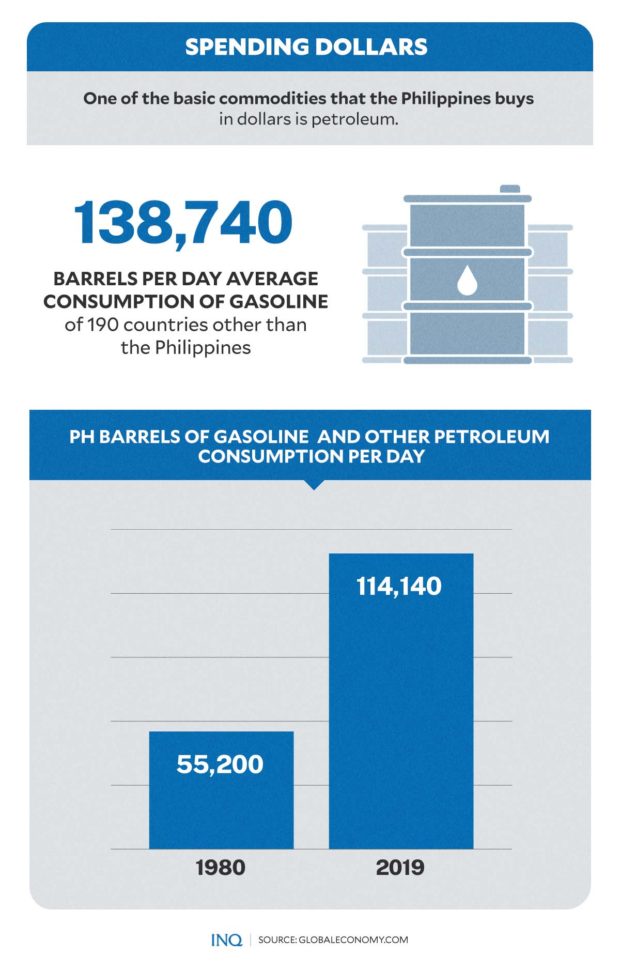 “Producers relying on imported inputs, and that’s nearly everyone, also face higher costs. Higher consumer prices could thus hit us all, including OFW families,” Habito explained in his previous column in the INQUIRER.

READ: Weaker peso: Should you worry?

Those paying back foreign loans will also bear the brunt of the depreciating peso as they will need more pesos to pay—and this includes the government itself.

He explained that even though more peso value will be needed to pay off the country’s foreign debt, the collection of Customs duties and other taxes on imports likewise increases. In short, the increased government revenue due to the impact of peso depreciation offsets the increased debt service.

At a Senate Finance Committee hearing last Sept. 14, Finance Secretary Benjamin Diokno said the continued weakness of the peso against the US dollar could benefit the proposed P5.268 trillion 2023 national budget.

“It will involve, for example, P10 billion additional revenues with little adjustment on the disbursement side, and that is mainly on the debt servicing because we cannot spend when Congress has not authorized,” he said.

The finance secretary added that the net effect of a P1 depreciation is a P7.6 billion reduction in the budget deficit.

The latest data from the Bureau of Treasury (BTr) showed that the national government’s outstanding debt reached a new high of P12.89 trillion in July due to additional local and foreign borrowings, aggravated by a weak peso. 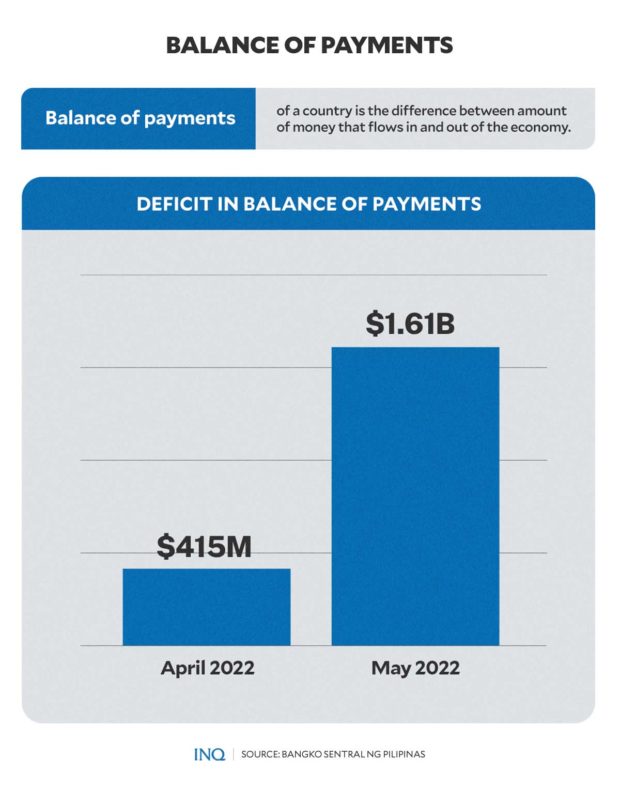 Domestic debts, which accounted for the bulk of 68.5 percent of the total, were at P8.83 trillion. The peso’s depreciation added P740 million to the domestic debt stock.

On the other hand, external debt amounted to P4.06 trillion, including the P25.77 billion added to foreign debt due to the depreciation of peso. A net of P6 billion was also borrowed from creditors overseas, including bilateral development partners and multilateral lenders offering concessional or low-interest loans.

“The good thing right now is most of the debt of the Philippine government is domestic debt. Compared to our historical average in the past, the proportion of foreign debt is bigger, but now because of the skillful management of our past economic managers—not only in the immediate past—they really made it such that our public debt is predominantly domestic debt,” said Habito.

“That’s why the effect on foreign service is not that heavy. My guess is that as the import revenues continuously increase, it will actually now be outweighing the debt service implications with the depreciating peso,” he added.

“My own estimate,” Habito said, is “not based on data but only general observation is the government is still okay because the foreign debt component of our national debt is still small.”

(Next: PH peso “most competitive,” preparing for the worst)