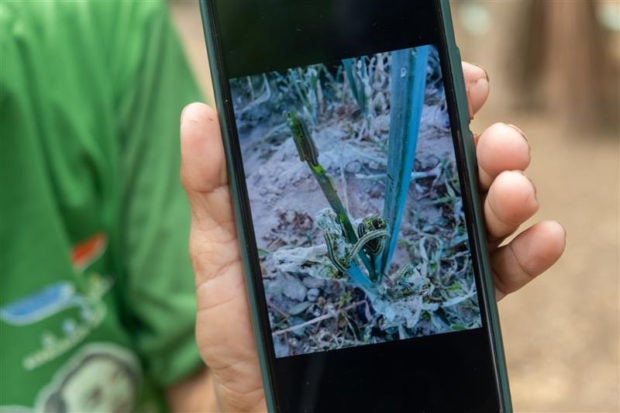 BAYAMBANG, Pangasinan — In the northwestern Philippine town of Bayambang, long known as the onion capital of Pangasinan province, an invasion of the crop-devouring armyworms has stolen farmer Merlita Gallardo’s income – and her husband.

The family’s a half hectare (1.2 acres) of onion fields – which once brought them a lucrative income – has been ravaged by the pest since 2016, when rising temperatures helped drive a surge in armyworms, bringing devastation to hundreds of the area’s farmers.

To combat the infestation, many farmers took out loans to pay the escalating costs of pesticides, racking up massive debts they have struggled to pay back.

“He drank pesticide to kill himself,” said Gallardo, 49, who also grows corn, now the only crop she has to support her five children and to try to slowly pay off the family’s debt.

“He was probably thinking about the money we lost and all our debts,” she told the Thomson Reuters Foundation, sitting on the patio of her home.

Scientists have warned that crop-damaging pests will only become more destructive as climate change brings hotter weather and more unseasonable rains ever.

Ryan Damaso, a coordinator at the farmers’ group MASIPAG, which focuses on sustainable farming, said the government needs to change its laws and support practices to promote agroecology, to create an agricultural system more in tune with nature.

“It’s not the farmers’ fault if they’re buried in debt. The problem is rooted in the policies of the state. The government needs to see agriculture as a holistic process of food production,” he said.

A heating planet has created conditions for pests to enter and breed in new regions, allowing them to expand through – and devour – ever larger areas, explained Yubak Dhoj G.C., a senior agricultural officer at the United Nations’ Food and Agriculture Organization.

“A changing climate (also) means infestations may occur at different times than usually expected and catch farmers off guard,” he said.

He pointed to the desert locust invasion of 2020, when vast swarms – some the size of cities – swept across Southwest Asia and the Horn of Africa, feasting their way through hundreds of thousands of hectares of crops and grazing land.

Scientists said erratic weather linked to global warming had created ideal breeding conditions for the insects to surge in numbers not seen in a quarter of a century.

In the Philippines, armyworm – a pest known locally as harabas – was first reported in Pangasinan in 2016, when a major infestation ravaged over 1,000 hectares of land, said municipal agriculture officer Zyra Orpiano.

Since then, there have been infestations about every three years.

A 2019 paper by researchers from the National Crop Protection Center at the University of the Philippines Los Baños noted that, along with extreme climate events triggered by El Niño – a warming of ocean surface temperatures in the Pacific that occurs every few years – the overuse of pesticides also played a role in the outbreak.

Using too much pesticide can cause insects to build up resistance to the chemicals, leading farmers to use more pesticide, trapping them in an expensive, ineffective cycle. 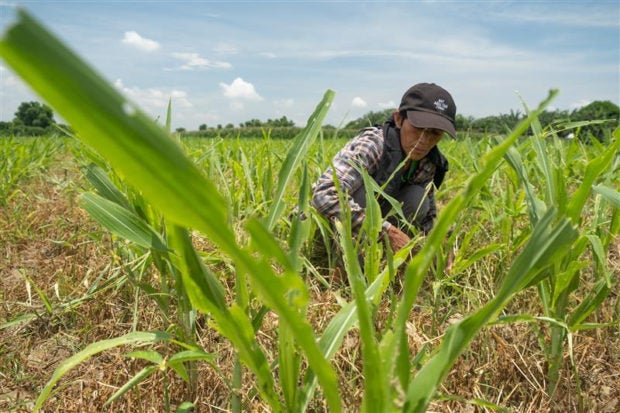 Farmer Mitchy Medrano clears weeds from the corn crops she grows after her onion crops were destroyed by armyworm, in Bayambang, Philippines, May 14, 2022. Thomson Reuters Foundation/Geela Garcia

The resulting drop in production has contributed to a countrywide onion shortage, the Department of Agriculture warned in August, leaving families without one of the key ingredients for many Filipino dishes.

“We don’t mean to make you cry,” fast food giant Burger King quipped in a Facebook post announcing it was out of fresh onions across the country.

Mitchy Medrano, 53, a small-scale farmer in Bayambang, said she could barely eke out a living after spending months trying to save her crops from ravenous onion armyworms.

She had to pawn her late husband’s land to cope with skyrocketing fuel and fertilizer costs triggered by the war in Ukraine and only made 50,000 pesos ($850) from her most recent harvest, a tenth of what she brings in with a good yield.

“We’re able to get by because I plant eggplant for sustenance,” said Medrano, who wants the government to help farmers pay for pesticides and other resources they need to protect their onion crops.

“I want to feed my family delicious food, but we can’t afford it.”

Farmers, for instance, have been taught which plant varieties are resistant to armyworms and how to use organic pesticides because chemical-based pesticides can turn the soil acidic, making it more susceptible to pests, she explained.

Filipino farmers need to ditch chemical pesticides and stop cultivating only one crop at a time, which can leave them with no other source of income if pests target that crop, said Damaso at MASIPAG.

“Not all pests consume all types of crops. Farmers who vary their crops can control infestations and prevent significant losses,” he said.

READ: Another Pangasinan town declares calamity state due to armyworms

Back in Bayambang, Gallardo said she often loses sleep worrying about her debts.

But farming is all she knows.

“I dropped out of school (as a child) because my family could not afford it. We continue to farm because this is the only way we know to survive,” she said.