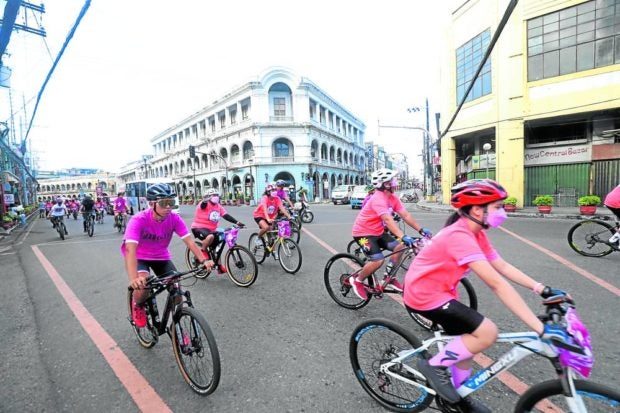 CYCLISTS’ HAVEN The Iloilo City government is ramping up initiatives to boost the city as a walkable and bike-friendly destination as more Ilonggos use bicycles to commute between home and work. —PHOTO COURTESY OF ILOILO CITY MAYOR’S OFFICE

ILOILO CITY—Officials of this city and Guimaras province have raised concerns over a new policy that banned the loading of bicycles onto boats while traveling between the two localities starting on Sept. 22.

Iloilo City Mayor Jerry Treñas, at a press conference on Monday, said he will meet with the Maritime Industry Authority (Marina) in Western Visayas to find out why the ban was imposed.

“I think we will never agree that [the Marina] will not allow bikes [on boats]. Sometimes, we make requests, but there are times that we make demands, and these are one of the few times that we will make a demand,” he said.

Iloilo City has been known as the bike capital and the most bike-friendly locality in the Philippines, having won multiple awards as a haven for bike enthusiasts and even holds a biking festival. It has 32 kilometers of bike lanes, including an 11-km network along Sen. Benigno Aquino Jr. Avenue and the Iloilo River Esplanade, and the eight-km University Loop, a circuit connecting six universities in the City Proper District. The city also has an ordinance that requires buildings to install bicycle racks.

Guimaras is considered a bike paradise in the country, with wide paved roads and forest trails suitable for bike lovers.

Last Friday, however, Jordan Motor Banca Cooperative (JMBC) announced it would no longer allow bicycles aboard its boats that ply the route between Iloilo City and Jordan, the capital town of Guimaras.

“It is not our intention to hamper the travel of every cyclist to and from our island but rather give information to them. At the moment the management is coordinating with authorities for possible means to resume transport of such items so that hobbyists who love to visit [Iloilo City] as well as locals whose means of transportation to their work will again be served,” it said.

The Inquirer tried but failed to reach the Marina office in Western Visayas on Monday.

Guimaras Gov. Joaquin Carlos Rahman Nava, in a statement, said that if they could not resolve the issue quickly, he might ask his wife, Rep. Lucille Ledesma-Nava, to raise the matter with the Marina’s mother agency, the Department of Transportation (DOTr), during their budget hearing this week.

“The DOTr budget is scheduled to be deliberated in the House [of Representatives] on Tuesday (Sept. 27), and if we cannot resolve it [with the Marina-Western Visayas] at the local level, we will ask [Rep. Lucille] to raise this issue during the budget deliberation, and to defer Marina’s budget if necessary,” the governor said.

Guimaras Vice Gov. John Edward Gando said he would also bring this up before the provincial board so that concerned officials could be summoned to appear before the body and explain why the policy was imposed.

“We will listen to the explanations and concerns of the knowledgeable authorities and individuals who thought of this idea.” INQ