Over 100 people evacuated in Olongapo City due to typhoon Karding 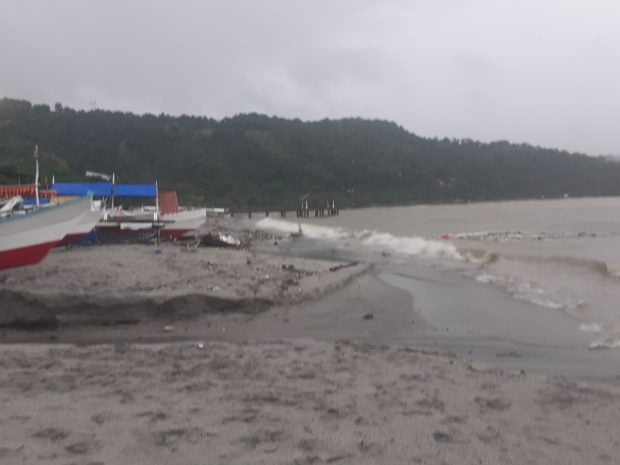 Huge waves brought about by strong winds are seen in this photo taken in Olongapo City during the onslaught of Super Typhoon “Karding” (international name: Noru). (Photo by Joanna Rose Aglibot)

OLONGAPO CITY — More than 100 people from low-lying villages in this city were evacuated on Monday (Sept. 26) due to Typhoon “Karding” (international name: Noru).

Angelito Layug, city disaster risk reduction officer, told the Inquirer that at least 42 families, or 145 individuals, from six villages in this city were displaced by floods caused by intense rains.

Olongapo and parts of Zambales were among the areas placed under Tropical Cyclone Wind Signal No. 4 on Sunday.

The river flowing through Barangay Mabayuan here hit the critical water level due to torrential rains on Monday morning.

Data from the city’s disaster risk reduction and management office showed that the water level underneath Mabayuan Bridge reached 2.59 meters at 8:55 a.m. on Monday.

The same data showed that water levels in other rivers in the city also rose to a warning level.

The water level underneath the Sta. Rita Bridge rose to 2.33 meters, while the water under the Balic-Balic Bridge peaked at 1.53 meters. INQ