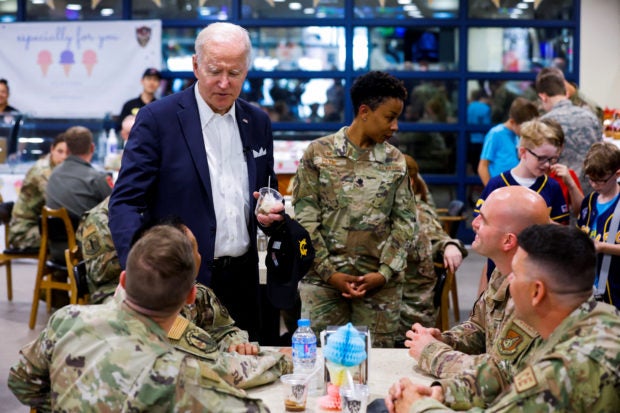 U.S. President Joe Biden has an ice cream as he greets the US troops during his visit to the Air Operations Center at Osan Air Base in Pyeongtaek, South Korea, May 22, 2022. REUTERS FILE PHOTO

SEOUL — Tensions over Taiwan have raised the thorny issue of whether U.S. troops based in South Korea would be involved in any conflict, with American and South Korean officials acknowledging that the peninsula could easily be dragged into a crisis.

South Korean President Yoon Suk-yeol told CNN in an interview aired on Sunday that his country was keen to work with the United States to “expand freedom”, but that in a conflict over Taiwan, North Korea would be more likely to stage a provocation and that the alliance should focus on that first.

North Korea has a mutual defense treaty with China and military analysts suggest it could coordinate with Beijing or take advantage of a crisis to pursue its own military goals.

Last week U.S. President Joe Biden said U.S forces would defend Taiwan in the event of a Chinese invasion, drawing an angry response from China and raising the stakes for U.S. allies that host American troops in the region.

China is South Korea’s largest economic partner, and Seoul could find itself on the literal front lines of any regional military conflict.

North Korea has backed China’s claims over Taiwan, and accused Washington of trying to build an “Asian NATO” that would import crises like the one in Ukraine to Asia.

Yoon has vowed to forge closer ties with the United States, which has had a mutual defense treaty with South Korea since the 1950-1953 Korean War and stations around 28,500 troops in the country.

But when asked whether South Korea will help the United States if China attacks Taiwan, Yoon did not directly answer.

Last week the commander of U.S. Forces Korea (USFK), General Paul LaCamera, said it was prudent to plan for all possibilities.

“What begins in one region spreads very quickly within the region and around the world,” LaCamera told a seminar hosted by the Institute for Corean-American Studies (ICAS) on Tuesday.

South Korean troops fought alongside Americans in Vietnam and supported the wars in Afghanistan and Iraq, but questions of future involvement are up to South Korea alone, LaCamera said.

In response, South Korean Vice Defence Minister Shin Beom-chul told broadcaster MBC that there had been no such discussions between Washington and Seoul.

“I can tell our citizens that we will ensure consultations would not move in a direction that undermines security on the Korean Peninsula,” he said.

A USFK spokesman referred questions about its role in any regional conflict to the Indo-Pacific Command and the Pentagon, which did not immediately respond.

South Korea’s Ministry of Defence also did not immediately respond to requests for comment.

Privately, many South Korean military officials expect they could once again face off against China, with memories of Beijing’s intervention on the side of the North in the Korean War, said one former South Korean general.

“They absolutely do not trust China, it’s something they feel in their bones,” he said.

In his confirmation hearing last year, LaCamera said he would seek to integrate USFK into “operational plans supporting U.S. interests and objectives in the region”.

In 2006, amid Washington’s push to mobilize forces for the “war on terror”, Seoul agreed to “strategic flexibility” under which it would “understand”, but not necessarily support, the deployment of USFK units to other locations, as long as it is consulted, said Sungmin Cho, a professor at the Pentagon’s Asia-Pacific Center for Security Studies (APCSS) in Hawaii.

“(It’s) still ambiguous,” he said. “This needs to be talked out between Seoul and Washington.”

Cho said North Korea could support China in a Taiwan conflict by launching an attack on South Korea, or simply use the conflict as a chance to push forward with its nuclear or missile development.

USFK is heavily focused on land-based troops, which would be of limited use in a conflict that remains focused around the Taiwan Straight, said former General Park Cheol-kyun, who worked on international policy at South Korea’s Defense Ministry until May.

“You need the navy, air force, and intelligence assets, so most of the U.S. forces that could contain or deter Chinese provocation, are mostly in Japan,” he said, but added that the U.S.-South Korea alliance can’t afford to ignore China’s role in the region.