Tens of thousands of Jewish pilgrims in Ukraine despite war 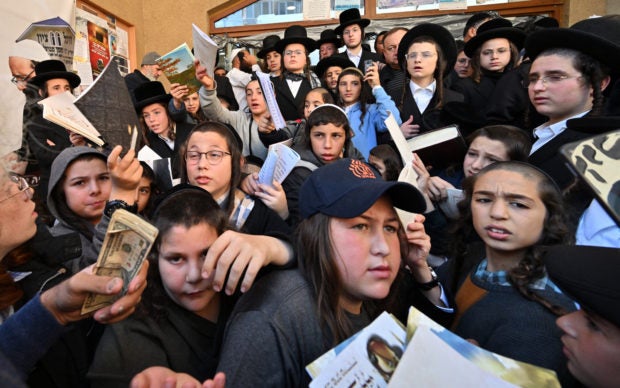 Children of Hasidic Jewish pilgrims leave after a pray at the tomb of Rabbi Nachman for Rosh Hashana, the Jewish new year, in the town of Uman, about 200km from the Ukrainian capital of Kyiv, on September 25, 2022. AFP

UMAN, Ukraine — Tens of thousands of Hasidic Jews gathered in the Ukrainian city of Uman for their annual pilgrimage, officials said Sunday, despite authorities asking them to skip the trip because of the war.

Every year, Hasidic Jewish pilgrims come to Uman from across the world to visit the tomb of one of the main figures of Hasidic judaism for Rosh Hashana, the Jewish new year.

The central Ukrainian city of Uman is relatively far from the frontline, but Ukrainian and Israeli authorities urged worshippers to skip the celebrations taking place between September 25 and 27 this year.

But despite the warnings, crowds of Hasidim dressed in traditional black clothing gathered in Uman, celebrating in the streets.

“This is the most important day of the year to be able to connect with God. And this a great place to do it,” one pilgrim, Aaron Allen, told AFP.

Pilgrims often cite a religious text from Rabbi Nachman, the founder of an ultra-Orthodox movement  who died in the city in 1810, in which he promised he would “save (worshippers) from hell” if they came to visit his tomb on Rosh Hashana.

“There were sirens, but coming from Israel we are used to sirens, we know what to do. We feel pretty safe,” said Allen, a 48-year-old doctor from Yad Binyamin.

Police set up a wide perimeter to access the area around the grave, checking IDs and only letting through residents and Hasidim.

It was forbidden to sell not only alcohol, fireworks and firecrackers, but even toy guns during the festivities in Uman, regional police spokeswoman Zoya Vovk told AFP.

Despite the restrictions, the shrine housing the tomb was buzzing with celebrations on Sunday.

Pilgrims — only men and boys — were praying, pressed against the white walls and columns of the burial place.

Outside the temple, a simultaneous prayer from hundreds of pilgrims resonated.

Police will not release the exact number of pilgrims until the end of the festivities for fear of attacks from Russia.

“We understand that there is a full-scale Russian invasion of Ukraine and that the enemy is monitoring information,” Zoya Vovk told AFP.

“The only thing I can say is tens of thousands (of pilgrims have already arrived),” she added, however.

The United Jewish Community of Ukraine NGO said that more than 23,000 pilgrims had arrived in Uman.

Uman in central Ukraine has been hit several times by Russian strikes since the invasion began on February 24.