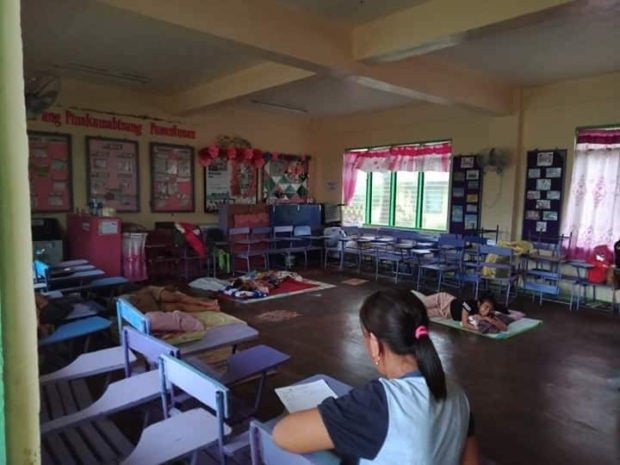 FILE PHOTO: Evacuees follow physical distancing rule as a precaution against the spread of SARS-CoV-2. This virus causes COVID-19, while inside evacuation centers where they stayed during the onslaught of typhoon Ambo. INQUIRER Visayas file photo / Rachel Arnaiz

MANILA, Philippines — The Department of Social Welfare and Development (DSWD) on Monday asked for one evacuation center for each municipality across the country, so classes in schools will not be interrupted whenever there is a calamity.

“Ang isa pang hinihingi namin, sir… We really need to have an evacuation center in every municipality, lalo na po ‘yung mga typhoon- at flood-prone areas,” he told Marcos, who presided over the briefing.

(Another thing that we’re asking, sir… We really need an evacuation center in every municipality, especially those in typhoons and flood-prone areas.)

(Because the weather is already good, the evacuees are still there because their houses are damaged. So, the students are cramped in other classrooms.)

Marcos then asked Tulfo if they could make a study to find out how long evacuees whose houses were destroyed or damaged by a typhoon stay in evacuation centers before returning to their homes.

But Tulfo immediately answered that evacuees with partially-damaged houses stay three to four days in evacuation centers before returning home.

(Those who just lost their roofs – usually roofs fly – usually three, four days, sir. Then, when we give them their AIC, the family can buy materials.)

Zambales, parts of three other Luzon provinces still under Signal No. 1