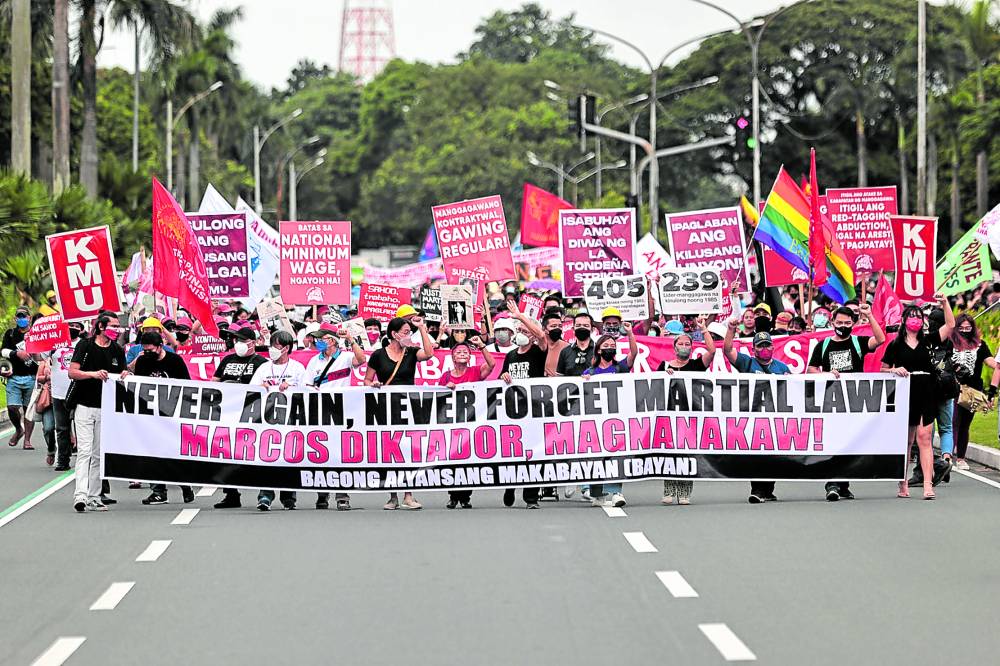 Activists and human rights advocates take the battle against historical distortion to the streets as they mark the 50th anniversary of the declaration of martial law. INQUIRER PHOTO / GRIG C. MONTEGRANDE

MANILA, Philippines — Sept. 21, now observed as a day of protest was decreed as “National Thanksgiving Day” by the late ousted dictator Ferdinand Marcos, who wanted Filipinos to “reflect on the blessings of goodwill and prosperity achieved under the umbrella of martial law.”

That was by virtue of his Proclamation No. 1180 in 1973, a year after he placed the country under military rule, according to martial law scholar Joel Ariate.

The irony was not lost on Ariate, who noted that as hundreds of activists and dissenters were killed, tortured, or disappeared during that period, Filipinos were being made to “express gratitude for the blessings brought forth by the New Society.”

In 2017, then President Rodrigo Duterte issued Proclamation No. 319, declaring Sept. 21 as a “National Day of Protest,” in solidarity with the “people’s call against excesses and shortcomings of the government.”

But the silence of the new Marcos administration on Wednesday, the 50th anniversary of the declaration of martial law, unnerved a number of martial law survivors and academics, including Ariate.

They surmised that it might be part of a strategy not only to to diminish the memory of martial law, but to deplete the generation that experienced its horrors.

This “state neglect,” according to Ariate, wasn’t so much a sign of timidity as “a systematic devaluing of the significance of the act of memory … [to reduce] it to islands of commemoration or resistance.”

“If your own government doesn’t even commemorate it, you would be made to think that those who do are just wasting resources, and make it hard for you to sympathize with people they brand as ingrates,” he said.

So the effect is twofold, Ariate said, as the Marcoses’ silence also “agitates their supporters to suppress those who do try to commemorate this date.”

Playwright-activist Bonifacio Ilagan, a victim of torture during martial law, agreed, saying the government’s silence or inaction was hardly a “good omen.”

“It could be the calm before the storm,” he said.

Ilagan said the recent showing of “Maid in Malacañang” in movie theaters showed how the Marcoses “don’t even try to embellish lies anymore to dodge the facts.”

“They just present a completely opposite narrative … packaging a lie as if it were gospel truth, leaving no room for any doubt,” he said.

It’s for this reason that artists and academics are now racing against time to battle historical revisionism, according to the makers of the documentary “11,103.” The film named after the number of documented victims of the brutal Marcos dictatorship from 1972 to 1986 was aimed at presenting “the biggest threat to the massive lies” perpetuated by Marcos allies and loyalists, its makers said.

On Wednesday, 11,103 premiered at the University of the Philippines in Diliman, Quezon City, featuring real-life accounts of state-sponsored violence during martial law.

The alternating survivor stories are woven into the narrative, supported by news clips and footage leading up to the pivotal scene of the Marcoses’ return to power, with the victory of the dictator’s son and namesake in the May presidential elections.

“This is the biggest evidence that the atrocities of the Marcos regime happened. No decree in the coming years can erase the memory of the people who have lived through the perils of those dark times,” said Leni Velasco, secretary general of the rights group Dakila.

The film was produced by Kara Magsanoc-Alikpala, daughter of the late Inquirer editor in chief Letty Jimenez-Magsanoc, who played a key role in the downfall of the Marcos regime.

“We’re hoping it’s the best way to engage [the audience], especially since it’s from a first-person [perspective]. Their stories are real. They are not best actors or actresses and their tears are real,” said Magsanoc-Alikpala, who also produced the documentary “Batas Militar” in 1997.

Mike Alcazaren, who directed the film with Jeannette Ifurung, said the title was an “unimpeachable fact.”

“We have to start with a fact because we are in a world, a country where they ‘say you’re wrong, that is not true,’” he said, adding that the number of martial law victims was “written in law.”

Cris Palabay, 67, one of the featured survivors, recounted how his torturers forced him to sit on an ice block and shoved his face into the toilet bowl.

“My clothes were removed and then I was electrocuted. I would lose my consciousness and after a while, they would repeat it again,” he said in the film.

Hilda Narciso, a former teacher and healer, recalled being taken to a military “safehouse” where she was repeatedly sexually assaulted by soldiers.

At one point, she recalled, “I gave up my body and told them, ‘just shoot me.’”

Bishop Jose Bagaforo, national director of Caritas Philippines, said it was impossible to “move on” in the absence of justice and accountability for such atrocities during martial law.

The bishop called on every Filipino to speak truth to power and “never again let the powers that be control the narrative.” —WITH A REPORT FROM KATHLEEN DE VILLA INQ

CHR: Martial law isn’t a relic, it has lessons to teach