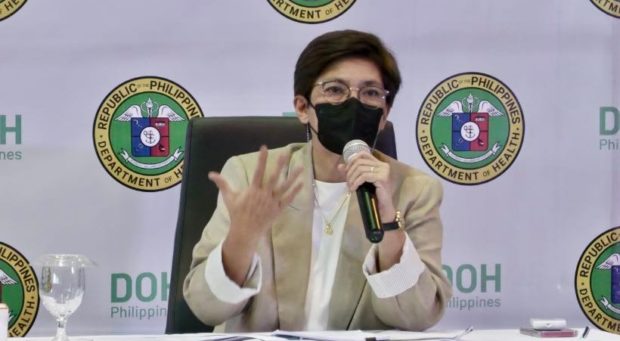 MANILA, Philippines — The Department of Health (DOH) has called for the creation of a national action plan against the use of fossil fuel, which the country relies on for power generation, due to its detrimental effects to the respiratory health of the population.

Maria Rosario Vergeire, officer in charge of the DOH, on Tuesday echoed the call of nearly 2,000 health organizations worldwide, including the World Health Organization (WHO), to adopt a framework for the phaseout of fossil fuel, which includes coal, crude oil and natural gas.

WHO chief Tedros Ghebreyesus said last week that the “modern addiction to fossil fuels is not just an act of environmental vandalism,” but also an “act of self-sabotage” from the health perspective.

Asked to comment on this statement, Vergeire said the DOH was “one with the WHO in the campaign for us to be able to have an action plan or a national plan against the minimal use of fossil fuels in the country.”

The WHO is among the signatories of the Fossil Fuel Non-Proliferation Treaty, a framework for a legally binding global plan to end the further expansion of fossil fuel production and infrastructure to cap global temperature to 1.5 degrees Celsius and curb the health risks associated with fossil fuel.

According to Vergeire, the country has been seeing the rise of respiratory illnesses due to air pollution, of which fossil fuel is a major contributor.

She said common clinical consultations include asthma among children and chronic pulmonary disease, which is exacerbated by air pollution, among the elderly.

Based on the latest data from the Philippine Statistics Authority, chronic lower respiratory diseases are the ninth leading cause of death in the country from January to May this year.

The country mainly relies on coal for power generation, followed by renewable sources of energy and natural gas, according to the 2020 statistics of the Department of Energy. The burning of coal, natural gas or oil to generate energy results in the emission of greenhouse gas, which in turn traps heat in the atmosphere.

PH gov’t should lead way in phasing out fossil fuel