Eagle rescued in Sultan Kudarat, another found dead in Sarangani 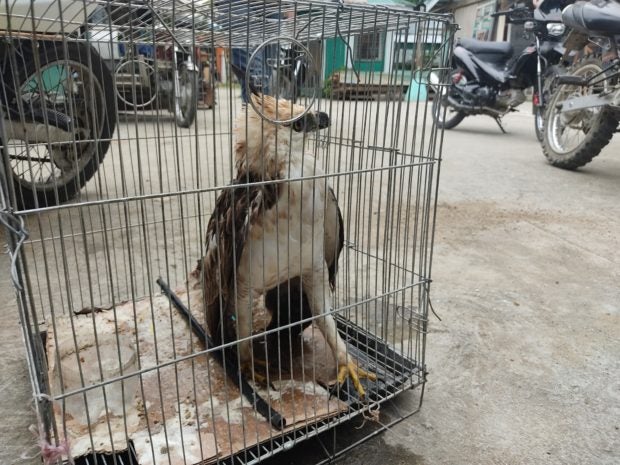 This Philippine hawk-eagle (Nisaetus philippensis) was rescued in Lebak, Sultan Kudarat and turned over to environment officials for a veterinary check-up. The eagle was eventually released back to the wild. (Photo from DENR-12)

COTABATO CITY – A Philippine hawk-eagle was rescued Tuesday by residents of an upland village in Lebak, Sultan Kudarat, and turned over to environment officials.

The rescue of a Philippine hawk-eagle (Nisaetus philippensis) in Barangay Salangsang came a day after discovering a dead Philippine Eagle in Barangay Daliao, Maasim, Sarangani province.

Iskak Dipatuan, the Community Environment and Natural Resources Officer (CENRO) of Kalamansig, said a resident found the eagle at 4:30 p.m. Tuesday in Barangay Salangsang and turned it over to his office.

“The eagle was healthy so far, but a veterinarian is checking it before his release back to the wild,” Dipatuan said.

Dipatuan lauded the community of Salangsang, an upland and thickly forested village of Lebak, for rescuing the endangered bird.

“We should recognize its crucial role in keeping the gentle balance of our forest ecosystem and its help in naturally regulating the species population and regeneration of our forest,” Dipatuan said.

Hunting, killing, illegal collection, possession, and trafficking of wildlife in the Philippines are punishable under Republic Act 9147 or the Wildlife Resources Conservation and Protection Act of 2001. 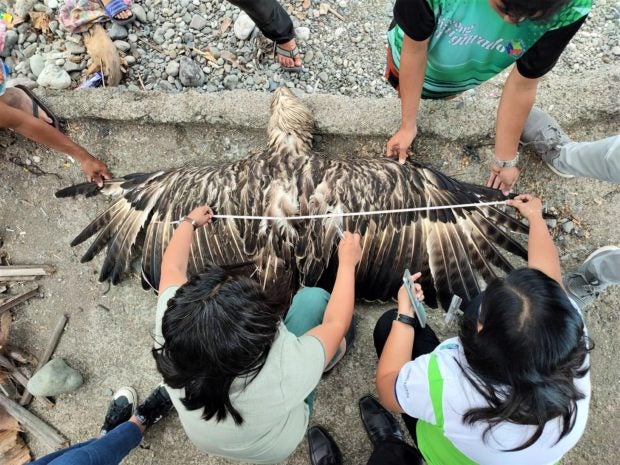 A dead eagle found in Sarangani being measured by DENR personnel. (DENR photo)

On September 19, a critically-endangered Philippine Eagle was found dead along the shoreline of Purok Maguid in Barangay Daliao, Maasim.

According to the Philippine Eagle Foundation (PEF), the female eagle is around three to four years old.

Maasim Municipal Environment and Natural Resources Officer Alejandra Sison said the lifeless carcass of the eagle was found along the coastline of Barangay Daliao at about 9:30 a.m. by a municipal government employee who alerted the village officials.

It was believed the eagle was dead for some four to five hours before it was discovered.

“The eagle has no bullet wound or any injury but we noticed the water is flowing out of his mouth,” Sison said.

Veterinarian Roy Mejorada suggested having the eagle covered with paper, put in a plastic bag, and placed in the freezer to avoid its rapid decomposition.

On Tuesday, the dead eagle was turned over to PEF through its representative, Senior Biologist Rowel Taraya.

Sison said the eagle would undergo necropsy and temporarily be under the custody of the PEF. Further information on the cause of its death will be released in the coming days.

Vice Mayor Visitacion Nambatac, who was present during the handing over of the eagle, said that the presence of the Philippine eagle in Maasim shows that “the town still has a good ecosystem.”

However, she said, “our forest and the eagles’ habitat have been disturbed by illegal logging activities and climate change.”

“Because of the forest activities by humans, the eagles are forced to proceed to the shoreline to look for food,” Nambatac said.