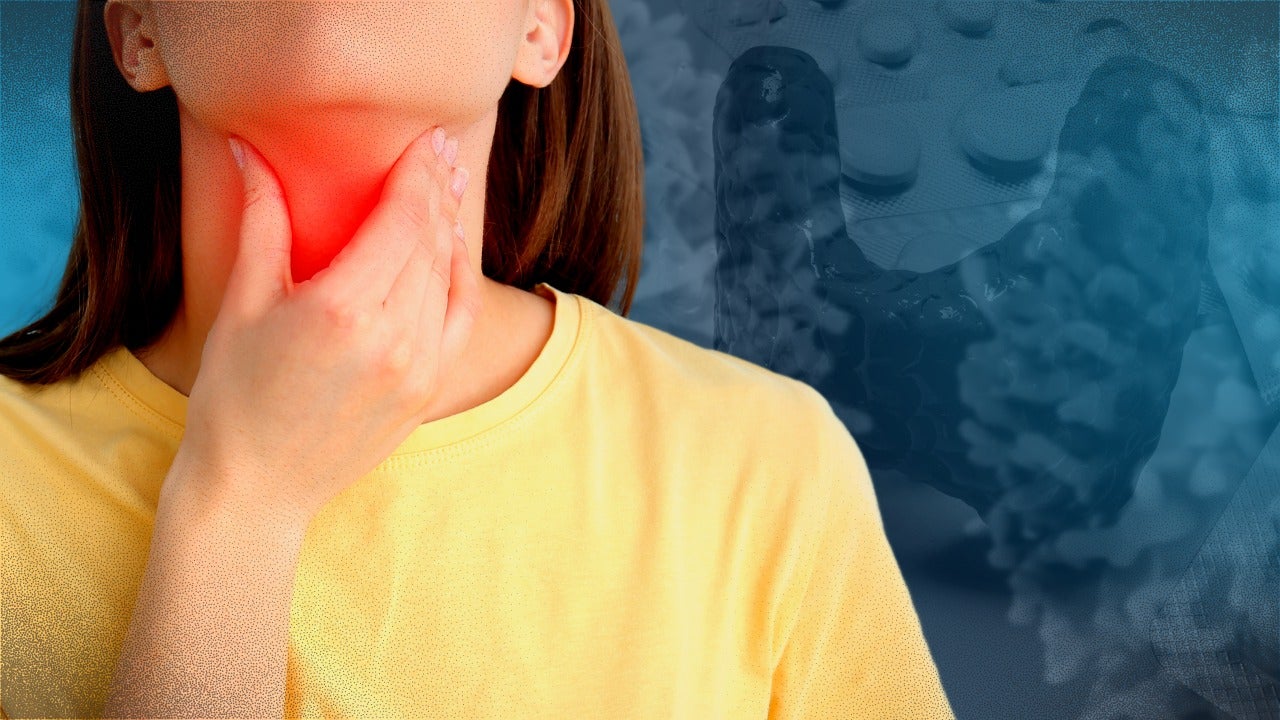 MANILA, Philippines—For many years, cancer has been one of the leading causes of death in the Philippines—and it continues to do so as of 2021.

To raise awareness on one of the most common types of cancer among Filipinos—thyroid cancer—the country observes National Thyroid Cancer Awareness for a week every year.

According to the Philippine Statistics Authority (PSA), neoplasms, commonly known as cancer, ranked as the fourth leading cause of death in the Philippines last year with 59,503 or 7.8 percent of the same year’s total deaths.

Some of the most common types of cancer among Filipinos, based on data by the Global Cancer Observatory (GCO) published in its online database (GLOBOCAN 2020), was thyroid cancer.

The Philippines, through Republic Act No. 10786 approved on May 2016, observes the National Thyroid Cancer Awareness Week every fourth week of September every year.

“To ensure a meaningful observance of the week as herein declared, a comprehensive public education and awareness program shall be undertaken to discuss the causes, consequences, diagnoses, treatments, and prevention of thyroid cancer,” the law said.

In observation of the National Thyroid Cancer Awareness Week, in this article, INQUIRER.net will provide more details about thyroid cancer—including symptoms, risk factors, treatment, and the number of cases in the Philippines.

The thyroid gland—or simply thyroid—is located in front of the neck and lies at the base of the throat. This butterfly-shaped gland is crucial in keeping the body healthy. It releases certain hormones which can help control and regulate metabolism, heart rate, blood pressure, and body temperature.

Thyroid cancer, the American Cancer Society said, is a type of cancer that starts “when cells begin to grow out of control.”

According to Johns Hopkins Medicine, due to differences in the roles of hormones in females compared to males, thyroid concerns—such as thyroid cancer—are more common in women than men.

In the Philippines, in the same year, the Department of Health (DOH) said the incidence of thyroid cancer was three times more in females than in males. The health department also noted that it was the most common type of cancer among women between the ages of 15-24. 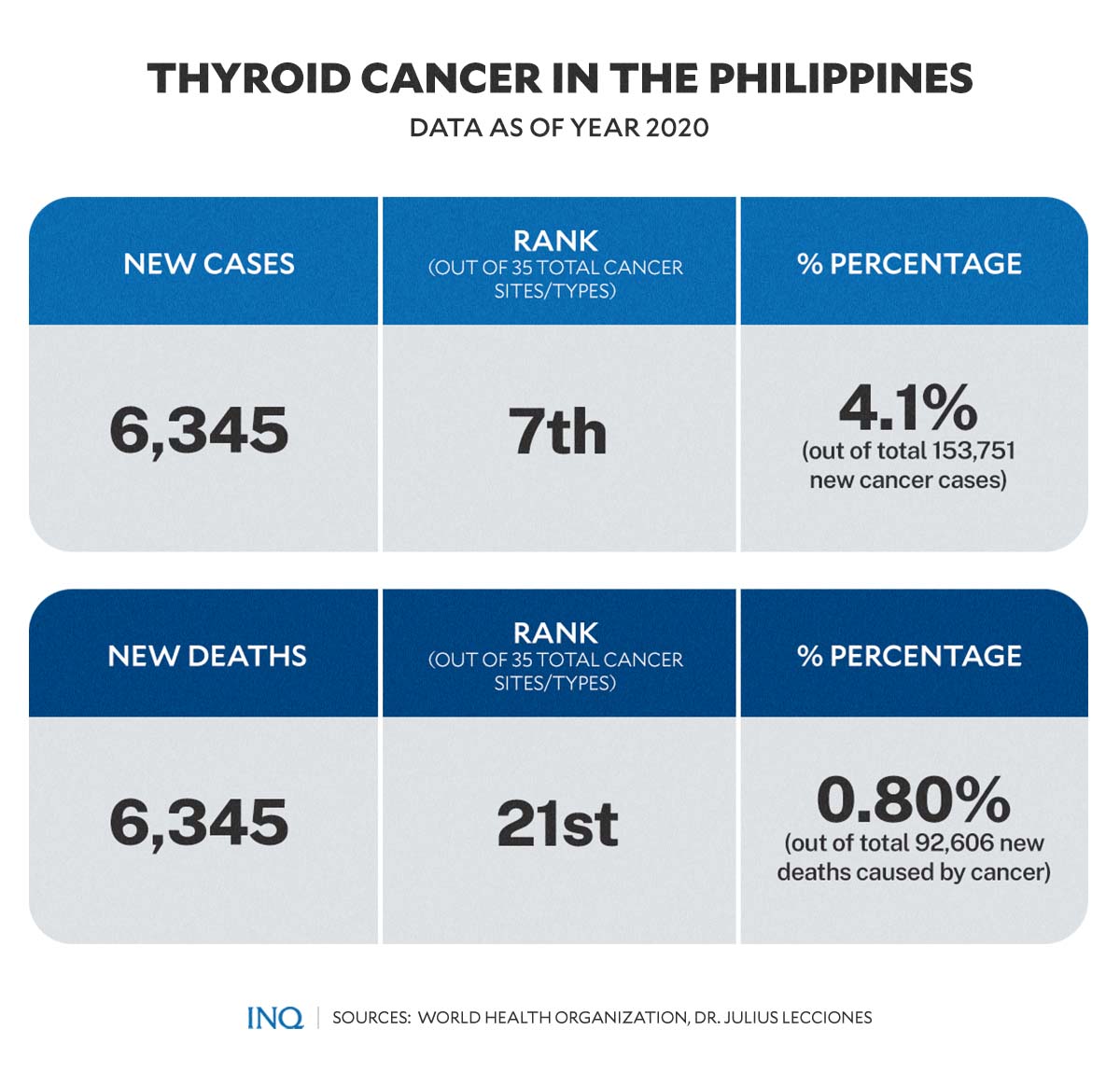 While scientists have yet to pinpoint the exact causes of thyroid cancer, the United States Centers for Disease Control and Prevention (CDC) listed some risk factors, including: 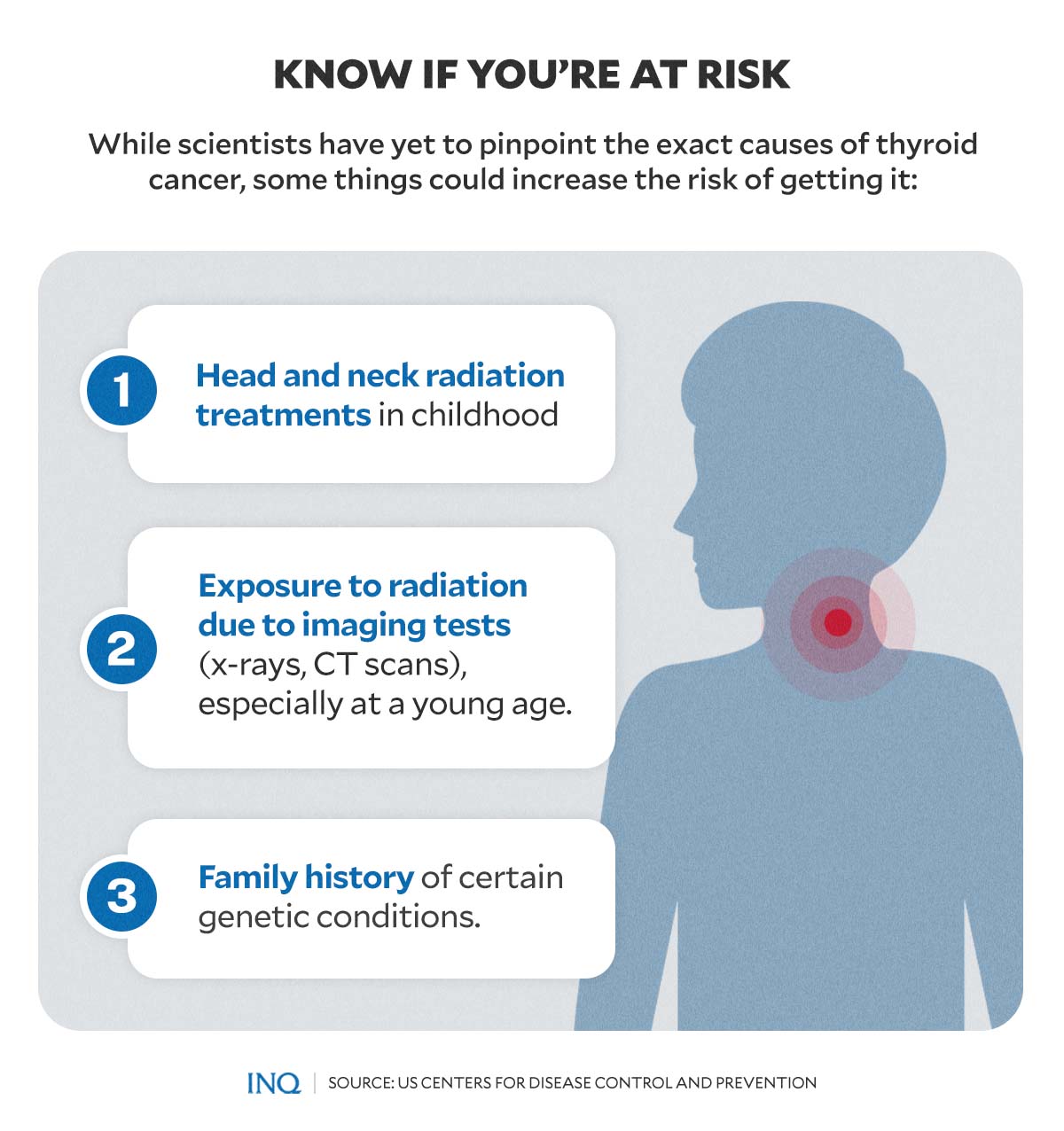 Data from GLOBOCAN showed that in 2020, there were 6,345 new cases of thyroid cancer in the Philippines—making it the seventh most common type of cancer in the country out of 35 cancer types recorded.

The cases were 4.1 percent of the total 153,751 new cancer cases recorded that same year in the country.

The data also showed that there were 743 new deaths due to thyroid cancer, or 0.08 percent of the total 92,606 new deaths caused by cancer in the Philippines in 2020. 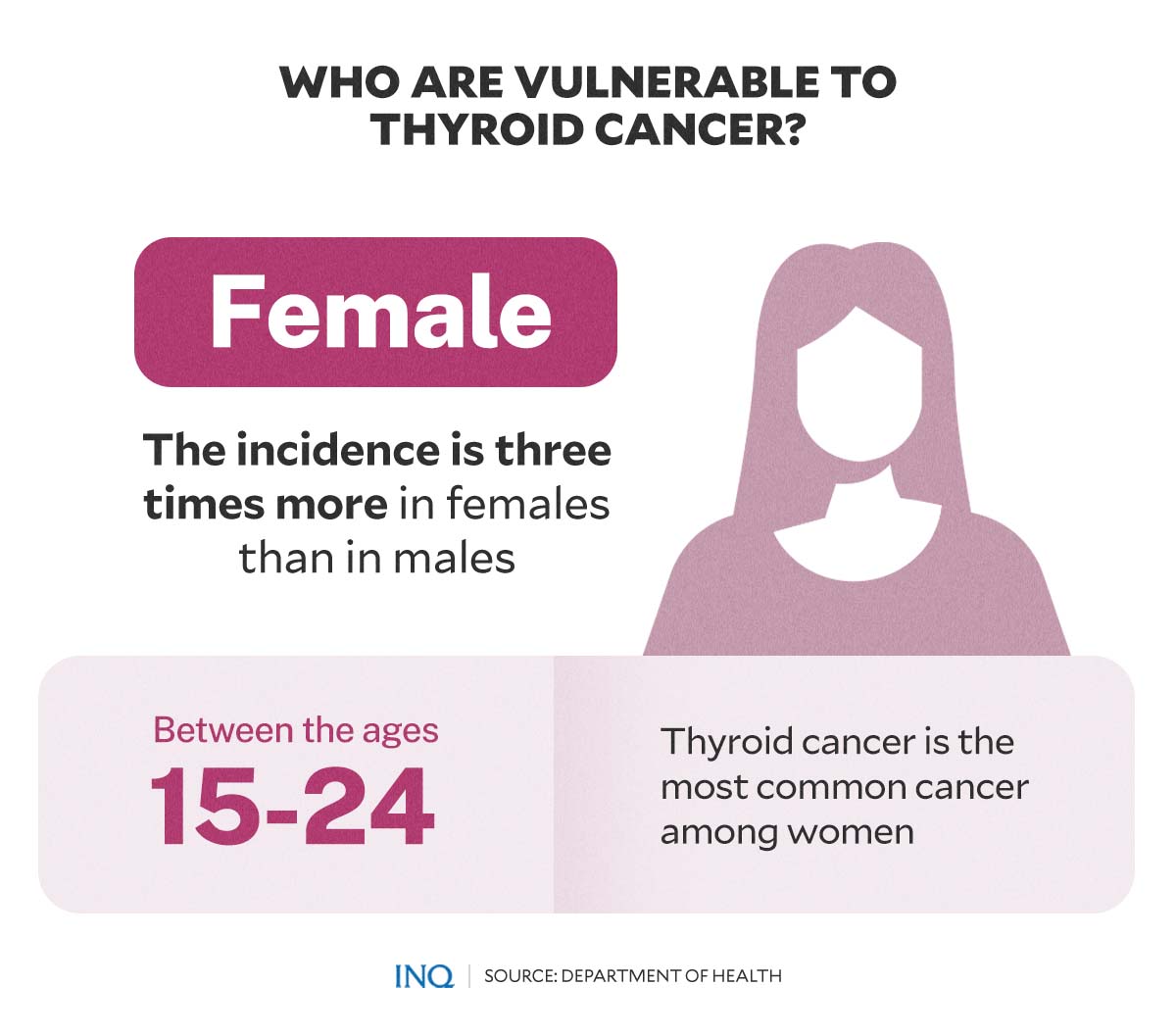 GLOBOCAN 2020 said the five-year prevalence of thyroid cancer among Filipinos was about 17.58 percent per 100,000 population.

In February, in commemoration of the third anniversary of the National Integrated Cancer Control Act (NICCA), the DOH conducted a forum with the theme “Transformative Innovations on Cancer Care: The Way Forward” to celebrate the country’s development and approaches to cancer care.

During the forum, the health department emphasized the government’s effort to achieve the goal to provide cancer control services to at least 50 percent of all Filipino cancer patients.

“Even as we continue to address the COVID-19 pandemic, cancer remains a national health priority of our government as it has a profound impact on individuals, families, communities, and the entire healthcare system,” said then Health Secretary Francisco Duque III.

“Since the enactment of NICCA, cancer control in the country is gaining momentum on different fronts. With our commitment and innovations, cancer is no longer a death sentence,” he added.

Republic Act No. 11215 stated that NICCA serves as the framework for all of the government’s cancer-related activities—which aims to decrease the overall mortality and impact of all adult and childhood cancer, lessen the incidence of preventable cancer in adults and children, and more.

According to DOH and the US CDC, among the symptoms and warning signals of thyroid cancer include:

While the US CDC noted that those symptoms could also be caused by other conditions, people who experience any of those should talk to their doctor right away.

“Don’t wait until the symptoms get worse,” the US CDC advised.

The United Kingdom’s National Health Service (NHS) explained that thyroid cancer often causes a painless lump or swelling low down in the neck.

“However, neck lumps are common and are usually caused by a less serious condition, such as an enlarged thyroid (goiter). Only around 1 in every 20 neck lumps are cancer,” the NHS said. 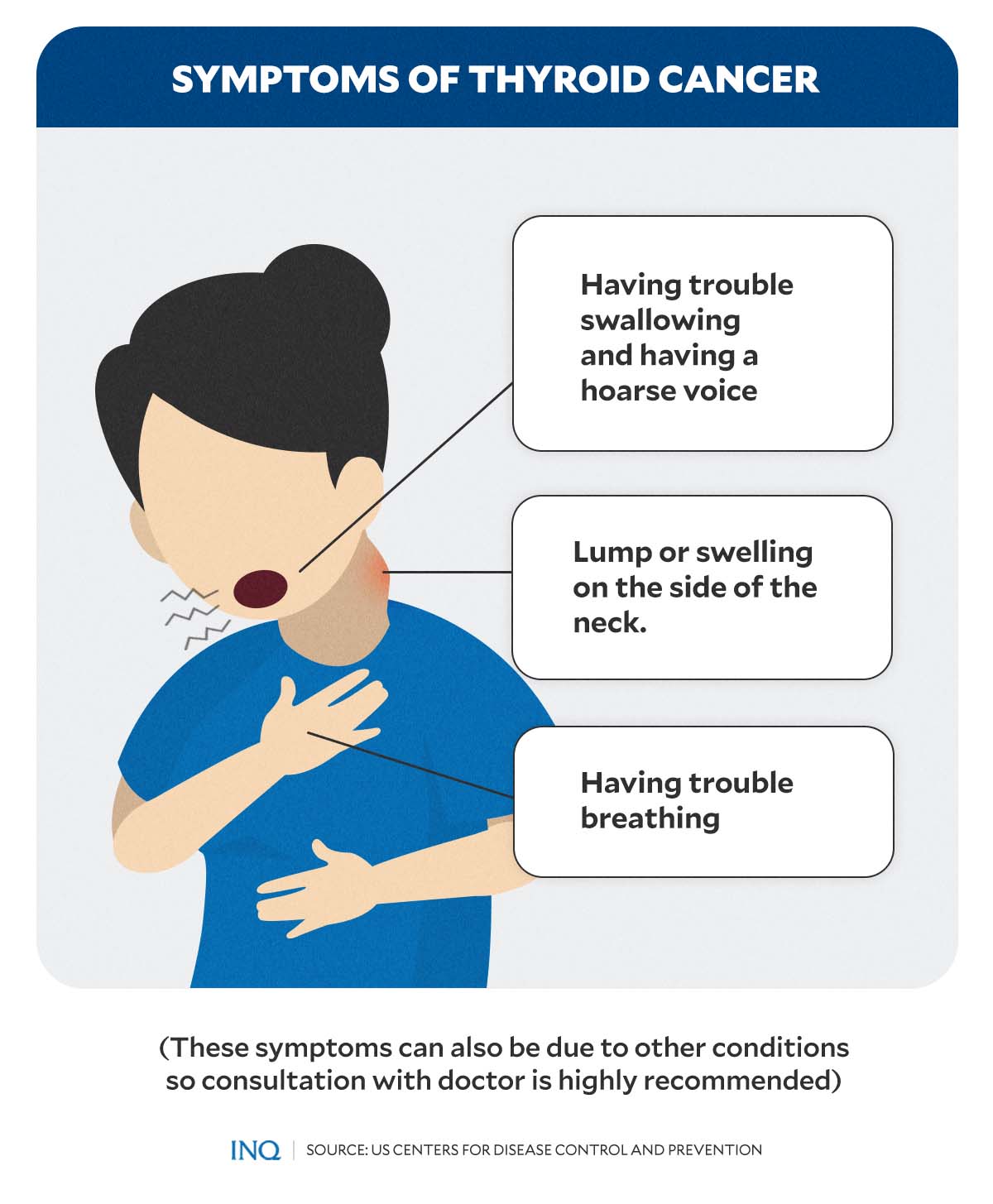 A lump in the neck is more likely to be cancer if it:

While often lumps are unlikely to be cancer, the NHS emphasized that it is still important to get them checked.

Since thyroid cancer can also affect the production of thyroid hormones, the NHS added that it can cause diarrhea and flushing.

Almost 95 percent of thyroid cancer in the country is highly curable by appropriate surgery alone, said the DOH.

According to Cleveland Clinic, surgery is the most common treatment for thyroid cancer. During surgery, part of the thyroid gland or all of it may be removed, depending on tumor size and location.

The surgeon may also remove any nearby lymph nodes where cancer cells have spread.

Another available treatment for thyroid cancer is radiation therapy, where patients will be asked to swallow a pill or liquid containing a higher dose of radioactive iodine than what’s used in a diagnostic radioiodine scan.

“The radioiodine shrinks and destroys the diseased thyroid gland along with cancer cells.”

While it may sound alarming, health experts clarified that the treatment is very safe.

“Your thyroid gland absorbs almost all of the radioiodine. The rest of your body has minimal radiation exposure,” the Cleveland Clinic added.

Other treatments for thyroid cancer included:

“Most thyroid cancers respond well to treatment and aren’t life-threatening.

Avoiding unnecessary exposure to radiation, including radiation from medical-imaging pictures—especially in young children, and around the head and neck—could meanwhile help reduce the risk for thyroid cancer.