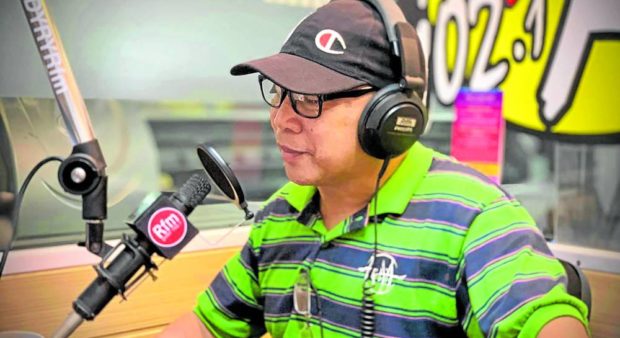 ON AIR Broadcaster Rey Blanco anchors a radio program in this photo posted on the Facebook page of Power 102.1 dyRY RFM on Aug. 11, 2021. Blanco, of Negros Oriental, was slain on Sunday. —PHOTO COURTESY OF POWER 102.1 DYRY RFM

DUMAGUETE CITY, Negros Oriental, Philippines — A radio broadcaster in Mabinay town in Negros Oriental province was stabbed and killed by a man whom he had engaged in a fight on Sunday night, police said.

Murder charges were now being readied against Charles Amada, who surrendered to the police shortly after he attacked Rey Blanco, the anchor of “Rakrakan sa Hapon Bulls Eye with Rey Blanco” aired over radio station Power 102.1 dyRY RFM in Mabinay, police said.

The killing happened at the start of the Press Freedom Week celebration in the neighboring island of Cebu.

According to Maj. Paul Vincent Dumaguing, chief of the Mabinay Police Station, Blanco went to the house of Wilbert Amada, the brother of the suspect, in Barangay Himucdongon in Mabinay town at around 6 p.m.

Dumaguing said an altercation ensued between Blanco and the Amadas, prompting the suspect to stab the victim from behind using a knife. Blanco was rushed to the Mabinay Community Hospital but was declared dead by an attending physician due to a fatal wound in his neck.

Police investigators have yet to reveal the motive of the killing as well as why the victim went Wilbert’s house.

Blanco used to be a broadcaster for radio station dyRD in Bohol province, where he became popular due to his hard-hitting commentaries in his “Nosi Balasi” program.

In 2010, he returned to his hometown in Bais City, Negros Oriental, where he continued his career in broadcasting.

Power 102.1 dyRY RFM, in a statement condemning Blanco’s killing, said that “the loss of a seasoned and caring commentator does not mean that his advocacy to defend the oppressed and abused people, especially the poor, will end.”

It added: “There is no democracy without an independent media. If you silence journalists, you silence the voice of democracy.”

The celebration, to culminate on Sept. 24, falls on the week of Sept. 21, the date of the declaration of martial law in the Philippines, as a reminder to protect the freedoms lost during the dark period in the country’s history.

“Fifty years is a long time, long enough for memories to fade,” a pooled editorial for this year’s celebration read, referring to Sept. 21, 1972, when then President Ferdinand Marcos Sr. signed Proclamation No. 1081 placing the Philippines under martial law. A day later, he issued General Order No. 1, s. 1972, transferring all powers to himself and then proceeded to rule by decree.

“Thus, journalists were among martial law’s first victims, targeted because the free circulation of information, provision of a platform for the multiplicity of citizens’ voices to be heard, and holding of those in power to account are anathema to dictators,” said the editorial.

In 1986, Marcos Sr. was overthrown in the Edsa People Power Revolution. Just 36 years later, his son and namesake was elected President of the country.

“The yearly celebration [of press freedom] reminds citizens that martial law led to the most flagrant violations against press freedom and free speech and that this could happen again if they are not vigilant,” said the pooled editorial.

—WITH A REPORT FROM ADOR VINCENT MAYOL