NEW JERSEY, United States — As he arrived in the United States for a six-day working visit in New York, President Ferdinand “Bongbong” Marcos Jr. on Sunday (Monday in Manila) reminisced how he and First Lady Liza Araneta-Marcos ignited their love for each other in New York.

In his speech addressing the Filipino community at the New Jersey Performing Arts Center, Marcos said he and Liza met in New York in 1986 when the First Lady was then working as a lawyer.

(Liza worked here as a lawyer for six or seven years, while I go in and out of here and with all of my visits. It is here that we developed our love and I married a Filipino. We met here in New York.)

Marcos said they were both elated when they arrived in the United States, saying it has been 25 years since they have both been here. 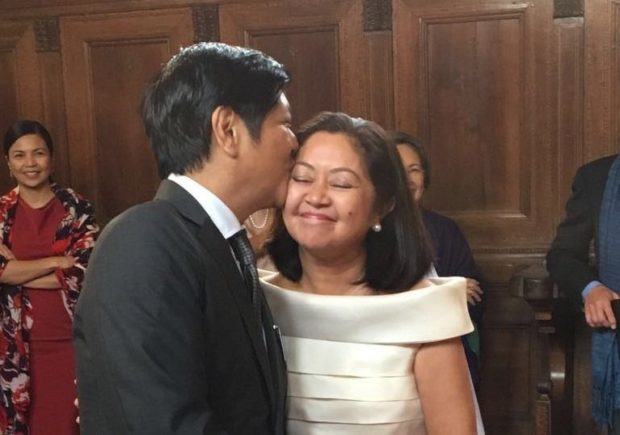 He shared that he met Liza, then already a practicing lawyer, came to visit a friend in New York, while he was in the US state with his mother, former First Lady Imelda, to wait for the resolution of her case here.

(In ’86, when Liza was a lawyer, we met in court when I was waiting for the resolution of my mother’s case while she was visiting a friend of hers.)

He didn’t specify the nature of the case of his mother, but at that time, his father and namesake had been deposed from Malacañang, and their family were forced to go on exile in the US.

The President even joked to his son, Ilocos Norte Rep. Ferdinand Alexander “Sandro” Marcos who was also present in the Filipino community, that he owed his life to New York.

(So, Sandro, you should thank New York because if it was not for it, you would not have been born.)

Marcos arrived in the US on Sunday and started his six-day working visit by meeting with the Filipino community in the country.

READ: President Marcos arrives in US for six-day working visit

He was accompanied by the First Lady, his son Sandro, his cousin Speaker Martin Romualdez, and the rest of the Philippine delegation, which is mostly composed of Cabinet members.

This is Marcos’ third foreign trip since assuming the presidency, holding his inaugural state visits in Indonesia and Singapore earlier in the month.

He is set to speak at the United Nations 77th General Assembly on Tuesday, Sept. 20.