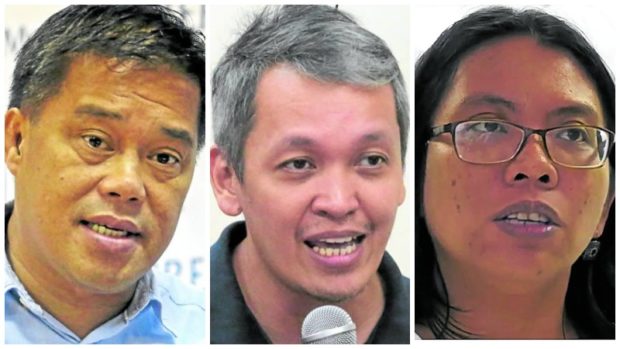 On Sunday, Human Rights Watch (HRW), Karapatan, and Bagong Alyansang Makabayan (Bayan) said they expected Marcos to use the occasion as a platform to “mislead” the international community and “deodorize his family’s image.”

Before his departure, the president said he would outline the country’s expectations of the UN during his speech and highlight the government’s “thrust for economic recovery, food security, and agricultural productivity.”

He was silent on whether or not he would assure UN member states about the human rights situation in the Philippines, which was recently flagged by the UN Office of the High Commissioner for its slow investigation and prosecution of suspects in rights abuse cases, including the thousands of extrajudicial killings reported in the conduct of the drug war.

“There are a few things that UN members need to keep in mind,” Carlos Conde, senior HRW researcher, told the Inquirer. “Mr. Marcos’s predecessor, Rodrigo Duterte, set the human rights bar in the Philippines so low that all Mr. Marcos has to do now to come off as a better leader is to do nothing.”

“And that’s exactly what he’s doing—nothing, as far as improving the human rights situation in the Philippines is concerned,” he said.

Conde cited the “realities” that UN members need to take into account, including the President’s recent statement that he wanted the crackdown on drugs to continue and his administration’s refusal to cooperate with the International Criminal Court in its investigation of alleged crimes against humanity committed during the drug war.

“They should resist the temptation to swallow everything Mr. Marcos says. The human rights situation in the Philippines remains bad and Mr. Marcos has not shown any sign or willingness to change it,” he said.

Bayan secretary general Renato Reyes said his group expected Marcos to “make a grand pitch to foreign investors and hype the state of the Philippines, even if our economy is mired in crisis and his administration has offered no real solutions.”

The group sees Marcos’ visit to the United States — where there is a standing warrant for his arrest for contempt of court in relation to a human rights class action lawsuit filed against his father and namesake for abuses committed during his regime — as legitimizing the president before the international community.

This would also make it harder to exact accountability for those abuses, Reyes said.

Even as the US government said Marcos enjoys diplomatic immunity and cannot be arrested, Reyes said: “This does not extinguish his liabilities arising from the contempt case.”

“The issues of the abuses by the Marcoses cannot be avoided wherever he may be in the world. We can be sure that he would avoid any reference to the period of his father even if we are collectively marking [its anniversary this week].”

The president would be at the general assembly as the country marks the 50th anniversary of his father’s declaration of martial law.

The older Marcos imposed martial rule on Sept. 23, 1972, but antedated his proclamation to Sept. 21.

Karapatan secretary general Cristina Palabay said that, “With [Mr. Marcos’] speech timed during the 50th year [of] the declaration of martial law, we view this as an insult especially to martial law victims and their families.”

Her sentiment was shared by the son of one of the named plaintiffs in the class action suit in Hawaii won in 1995 by those who suffered under the Marcos dictatorship.

“Despite the intense trauma they experienced, my mother and thousands of other victims chose to seek the accountability of the Marcoses in the US courts, while Marcos Jr. and his family willfully undermined their efforts to seek justice. What is more unnerving is that she now is again victimized by another Marcos, having to face arrest and detention on trumped-up charges,” said Ron de Vera.

His mother, Adora Faye de Vera, and nine other named plaintiffs, with the support of the Samahan ng Ex-Detainees Laban sa Detensyon at Aresto, had spent years pursuing the case after it was filed on April 7, 1986.

It was only in 1992 that the US Federal District Court of Hawaii issued its judgment in favor of the Marcos victims, by declaring Marcos Sr. guilty of gross human rights violations and finding his estate liable for damages.

Just last month, Adora — who had endured rape and torture during martial law — was arrested for the third time in her life, and for the second time under a Marcos.

She faces multiple murder and frustrated murder charges before an Iloilo court, over the 2005 ambush of military personnel.

President Marcos arrives in US for six-day working visit

Bongbong Marcos flies to US for UN General Assembly