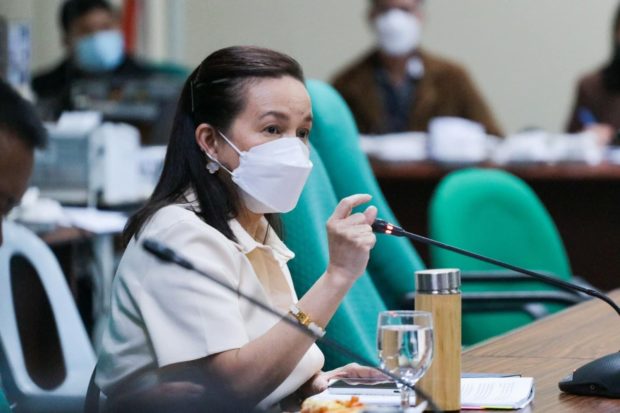 Image from the Office of Sen. Grace Poe

MANILA, Philippines — The government must immediately look into the alleged trafficking of persons carried out by syndicates who organize foreign tours to lure their victims, which has led to the recent rise in kidnapping cases in the country, Sen. Grace Poe said on Thursday.

At the hearing of the Senate committee on public order and dangerous drugs, Poe urged the Philippine National Police and concerned agencies to ensure “tight coordination” instead of issuing conflicting statements that only confuse the public.

“What is supposedly happening is that tourists who arrive in the country get kidnapped and then sold to syndicates, who, in turn, will purportedly demand the reimbursement of their expenses before they release the victims,” she said.

The committee, chaired by Sen. Ronald dela Rosa, began on Thursday its inquiry into the reported cases of abductions and disappearances in Metro Manila and Luzon. It also started a day after authorities rescued 43 foreigners working in a Philippine offshore gaming operator (Pogo) company in Pampanga.

The committee showed amateur videos of alleged abductions, torture and recovery of cadavers of alleged kidnap victims, mostly by suspects who were “Chinese-looking,” according to the PNP.

Another video from a security camera showed two women, who turned out to be Cambodian and Vietnamese tourists, who jumped out of a building purportedly to escape their “Chinese-looking” captors, according to police.

Poe pressed the PNP’s Anti-Kidnapping Group (AKG) to explain how it had been dealing with these incidents, whether reported to the agency or not.

“Are you not worried about the possible escalation? How can we expect families of victims to report (to authorities) when we are told that syndicates would usually visit the relatives of their victims who are abroad, whether in Cambodia or Vietnam,” she said, addressing PNP officials.

In a Viber message to the Inquirer, Poe expressed concern over the reported kidnappings.

“The fact that foreign tourists are being kidnapped in the country will have adverse effects on our tourism industry and economy if left unaddressed,” she warned.

“This necessitates a joint effort by the Bureau of Immigration (BI), the [PNP] and the National Bureau of Investigation who should speak with one voice to avoid giving confusing and contradicting data,” Poe said.

These agencies should also have a “reliable coordinating center with a functioning hotline” and a designated spokesperson who will collate all information before issuing any statement, she added.

“We also expect the PNP and the NBI to closely coordinate with their foreign counterparts, including the Interpol, to secure intelligence information on criminal elements masquerading as tourism agents,” the senator said.

Poe also called on the BI to step up its inspection of foreigners entering the country to ensure they are legitimate visitors and not trafficked persons.

The senator said she would call for another Senate inquiry to look into the “social costs” of the country’s hosting of Pogos, following the PNP’s report that 15 of the recorded 29 kidnapping incidents for 2022 were “Pogo-related.”

Also on Thursday, at the hearing of the Senate committee on finance chaired by Sen. Sonny Angara, Finance Secretary Benjamin Diokno expressed support for calls to end the Pogo program, citing its social cost.

The industry used to be a major contributor to government coffers, but Diokno said total Pogo revenue dropped to P3.9 billion in 2021 from P7.2 billion in 2020.

Meanwhile, Dela Rosa said the PNP should also look into reports that licensed “protective agents”—Filipinos who have secured a permit from the PNP’s Supervisory Office for Security and Investigation Agencies (Sosia) to serve as bodyguards of VIPs and foreigners—were being used in the kidnapping of foreigners.

In an interview, Dela Rosa said the PNP may invoke the “doctrine of hot pursuit” to carry out warrantless arrests against such agents.

“My immediate advice is for the Sosia to summon the 35 protective agents under it and determine whether one of them is identified to be in the videos (shown during Thursday’s hearing),” he said.