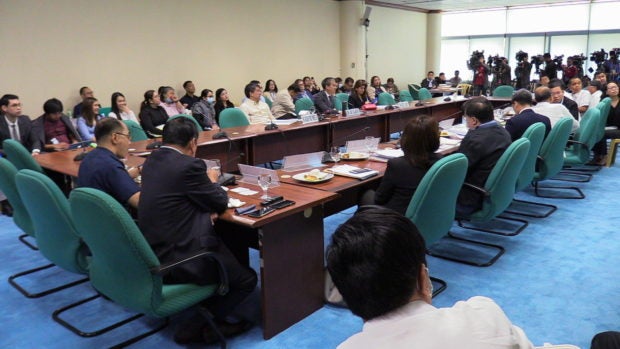 FILE PHOTO: Senate inquiry on the Influx of illegal foreign workers for Philippine Offshore Gaming Operators (POGOs) on February 11, 2020. – On Thursday, September 15, 2022, the Philippine Chinese Chamber of Commerce and Industry Inc. reveals that POGO workers would rather keep kidnapping cases a secret for fear that reporting them to authorities will only lead to their punishment.INQUIRER.NET/CATHY MIRANDA

MANILA, Philippines — Workers for Philippine Offshore Gaming Operators (Pogo) would rather keep kidnapping cases under wraps because they fear that reporting them to authorities will only lead to their punishment.

The Philippine Chinese Chamber of Commerce and Industry Inc. (PCCCII) revealed this before senators on Thursday, during a Senate committee hearing on public order and dangerous drugs investigating the spate of reported abduction incidents.

PCCCII secretary general Ko Bengsum, however, stressed that the Chinese government is not condoning Pogos.

“Whoever is working with the Pogo – if they are abducted or kidnapped by anybody else, they would not want to go to the authorities. Because once they go to the authorities and it’s reported to the Chinese embassy, immediately they would be deported back to China, and they will be banned from going out of the country for the next five years. And their passports will be canceled immediately,” Bengsum explained.

The PCCCII earlier sought help from the Philippine National Police (PNP) and Congress as it received 56 reports of kidnapping incidents involving Chinese nationals from its local chapters across the country. Bengsum clarified though, that the 56 cases are yet to be verified.

According to the data of the PNP Anti-Kidnapping Group, only 27 abduction cases have been recorded so far for this year. Of the number the police data showed, 20 were related to the Pogo industry.

READ: To set record straight, PNP says only 27 kidnapping cases so far in 2022

Bengsum appealed to authorities to “take a look and be more proactive on things like this.”

Senator Ronald “Bato” dela Rosa, who chairs the committee handling the Senate inquiry, reminded the PNP not to dismiss these reports and leave the burden to prove the cases to the PCCCII.

(Since they revealed this number to the public, you must seek their cooperation to find these 56 cases. That should be our attitude – to see these alleged 56 kidnapping incidents.)

Dela Rosa then urged the PCCCII to coordinate with the PNP in investigating the reported abduction cases.

“You are the source of such information, so you are also morally obliged to help the PNP locate and identify these cases para hindi mag-iisip iyong taumbayan kung ano ba talaga iyong totoo rito (so the public will no longer be confused about which figure is true),” the senator added.

Bengsum, for his part, said the PCCCII and the PNP have already started working together, pointing out that their joint effort led to the successful rescue of 43 Chinese nationals in Angeles City, Pampanga, on Wednesday, September 14.